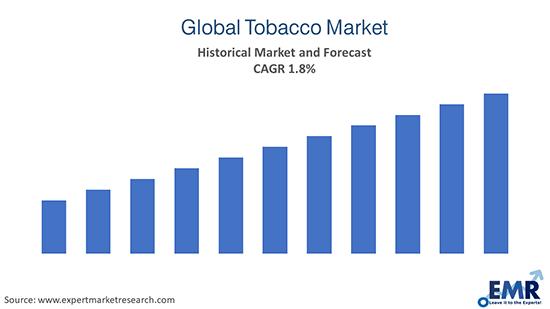 Tobacco contains nicotine which is highly addictive. It can be extremely hard to get rid of habits for chewing or smoking tobacco especially for consumers with difficult routines. Hence, the rapid surge in the smoking habit, owing to the changing lifestyles and hectic office schedules, is leading to an expansion of global tobacco market size.

The tobacco industry is also an important aspect of economic development as this industry provides employment opportunities in the rural areas. In addition, the tobacco market, together with the food and beverage sector, are fuelling the economies development of the emerging economic nations. However, initiatives by governments to discourage tobacco consumption habits due to health reasons may negatively affect the market share of tobacco industry.

According to the tobacco industry analysis, Asia Pacific region has been contributing significantly to the growth of the global tobacco industry and is likely to continue doing so in the forecast period. The tobacco industry market share growth in the region can be attributed to the rising demand from the leading economic countries, like India and China. China has been a top producer of tobacco as tobacco leaves are widely available and there is a sizable tobacco companies market share. On the other hand, India has been adding to the regional growth as the product is getting increasingly accessible through retail channels like hypermarkets and supermarkets. 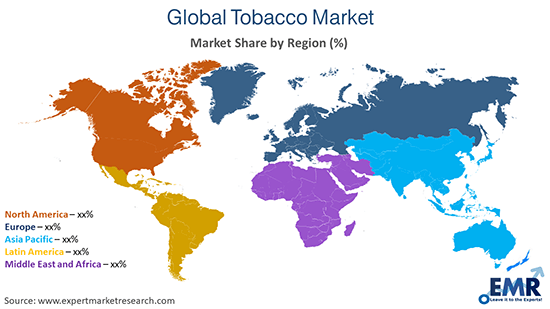 Cigarettes to be the Leading Segment in the Global Industry

The rising population of cigarette smokers worldwide has been the primary driver propelling the growth of the global tobacco industry and the tobacco market size as cigarettes are considered to be the most widely consumed tobacco product in the market. Along with the popularity of cigarettes, the tobacco industry is also likely to witness robust growth in the forecast period. It generates significant tax revenue for governments worldwide, which adds to economic growth. In addition, the increasing sale of cigarettes via the unorganised retail outlets in rural, semi-urban, and tier-1 cities, is a crucial tobacco industry trend. 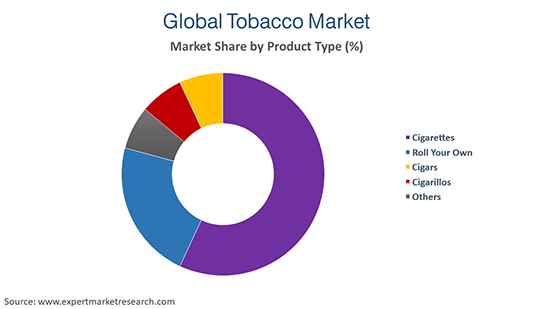 Tobacco is an American native plant among the world's most extensively used addictive substances. Tobacco refers to any Nicotiana species (especially Nicotiana tabacum) and is widely farmed for their leaves, which are dried and processed for use in pipes, cigarettes, and cigars. It is also chopped into chewing tobacco, ground into snuff or dipping tobacco, and used in other less popular formulations.

The demand for tobacco has been on the rise despite the awareness about its ill effects on health due to the hectic lifestyles of the consumers, the rising disposable incomes of the consumers, and the rising number of smokers due to peer pressure. The key players have invested heavily to boost their portfolios and attract more consumers, accounting for significant tobacco industry trends. Tobacco products are increasingly being introduced in new packaging, flavours, and styles, aiding the market growth of the product. The availability of e-cigarettes and other products with less tobacco content has also catered to the needs of the consumers, propelling the development of the product in the market further.

The report gives a detailed analysis of the following key players in the global tobacco market, covering their competitive landscape, capacity, and latest developments like mergers, acquisitions, and investments, expansions of capacity, and plant turnarounds:

What was the global tobacco market size in 2022?

The major drivers of the market include the increasing population, elevating income levels of consumers, lenient government regulations, rising investments in the research and development of new products, increased adoption of innovative marketing methods, and the availability of various flavours and different packaging options.

What are the key industry trends of the global tobacco market?

The increasing number of tobacco consumers in emerging nations and the introduction of numerous premium tobacco products are the key industry trends propelling the market growth.

What are the regional markets of tobacco, according to the report?

What are the different product types in the market report?

Cigarettes, roll your own, cigars, and cigarillos, among others are the different product types explored in the market report.

The global tobacco market was estimated to be worth USD 859.14 billion in 2022 and is being driven by the increasing number of tobacco consumers worldwide. Aided by the elevating income levels and the introduction of numerous premium tobacco products, the market is expected to witness a steady growth at a CAGR of 2.1% in the forecast period of 2023-2028 to reach a value of USD 973.232 billion by 2028.