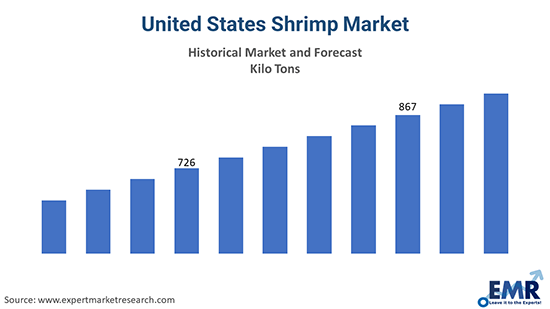 The United States is the second-largest consumer of shrimps after China. In the country, shrimps are among the most consumed seafood holding about 25%-30% of the entire seafood market in the country. In the United States, the majority of the shrimp is imported from South Asian and Latin American countries.

A majority of the United States population prefers various types of meat on a daily basis. However, in recent decades, the per capita consumption of meat has dropped on account of changing food preferences of the consumers and growing health consciousness among them. This has resulted in the increasing popularity of seafood products like shrimp in the country. Shrimps are now being included in numerous recipes such as shrimp cocktails, seafood gumbo, noodle soups, and dumplings.

Shrimp is a small free-swimming crustacean with an elongated body, which is normally marine and is frequently of commercial importance as food. 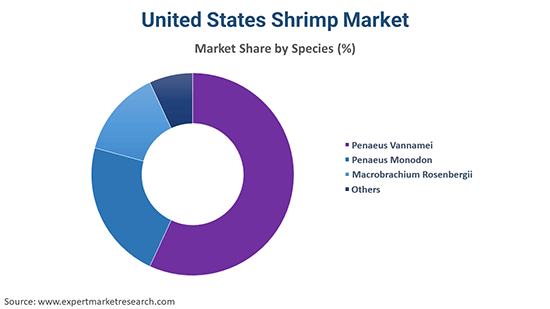 The industry is bifurcated on the basis of the environment into:

Out of these, the farming variants dominate the overall market, accounting for the largest share, on account of escalating shrimp imports from Asian countries such as Thailand, China, India, and Indonesia.

Based on species, the market is segmented into:

Amongst these, Penaeus Vannamei exhibits the most popular species of the product in the country.

On the basis of product categories, the industry is categorised into:

The peeled variety currently accounts for the majority of the market share.

On the basis of the distribution channel, the idnustry is divided into:

Currently, hotels and restaurants represent the largest distribution channels of the product as they offer several shrimp-based dishes.

Based on production and imports, the industry is divided into:

At present, imports represent the leading market share owing to the rising demand for the product in the United States. 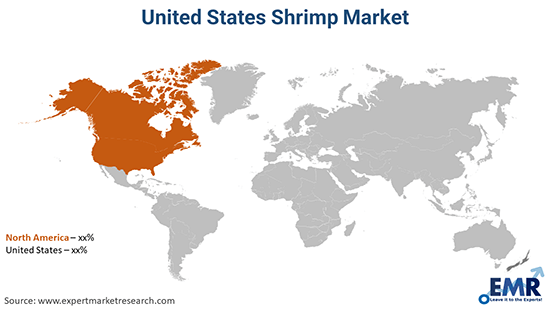 The United States shrimp market is driven by the several health benefits offered by the product upon consumption, such as prevention of brain cell damage, prevention of numerous chronic health diseases, and an increase in the good HDL cholesterol levels in the human body. In addition to this, the United States is also observing an increase in the demand for convenient and value-added products, like cooked shrimp, tempura shrimp, breaded shrimp, and shrimp paste, which require minimal cooking, further aiding the market growth. These are further being incorporated in meals by health-conscious consumers, as they are low in calories and carbohydrates.

The report gives a detailed analysis of the following key players in the United States shrimp market, covering their competitive landscape, capacity, and latest developments like mergers, acquisitions, and investments, expansions of capacity, and plant turnarounds:

What was the United States shrimp market size in 2020?

In 2020, the United States shrimp market attained a volume of more than 750 kilo tons.

The major drivers of the industry, such as the several health benefits offered by the product and increasing demand for convenient and value-added shrimp products, are expected to aid the market growth.

What are the key industry trends of the United States shrimp market?

The key market trend guiding the growth of the shrimp market includes the rising health-consciousness among consumers.

What is the dominant environment of shrimp in the industry?

Farming shrimp dominate the overall market based on the environment, accounting for the largest market share.

What is the most popular shrimp species?

Penaeus vannamei is the most popular shrimp species in the country.

Which is the leading product category in the industry?

Peeled shrimp is the leading product category in the industry.

Which is the largest distribution channel in the shrimp industry?

Hotels and restaurants represent the largest distribution channels in the shrimp industry.

Which is the leading segment in the production and imports category?

Imports are the leading segment in the production and imports category.

The major players in the industry are Aqua Star, Harbor Seafood, Eastern Fish Company, and Mazzetta Company, LLC, among others.

The United States shrimp market attained a volume of nearly 750 kilo tons in 2020 driven by the increasing demand for convenient and value-added shrimp products. Aided by the rising health-consciousness, the market is expected to witness a further growth in the forecast period of 2022-2027, growing at a CAGR of 2.5%. The shrimp market is projected to reach a volume of almost 869.8 kilo tons by 2026.

The India Basa fish market is being supported by the growing fish market in India, which attained a value of INR 1367.5 billion in 2021. The market is driven by the rising demand for seafood in the co...
Read More

The global canned tuna market attained a value of USD 8.44 billion in 2021, driven by the growing popularity of seafood, high nutritional value of the product, and increasing disposable incomes. Aided...
Read More