The global wheat starch market stood at a volume of 6.45 million tons in 2022. The rising demand for the product is being driven by the growing global population. The industry is expected to grow further in the forecast period of 2023-2028 at a CAGR of 1.1% to reach 6.88 million tons by 2028. The growing health consciousness among consumers, leading to an increasing demand for low-calorie sweeteners and gluten-free food is aiding the growth of the global wheat starch market. 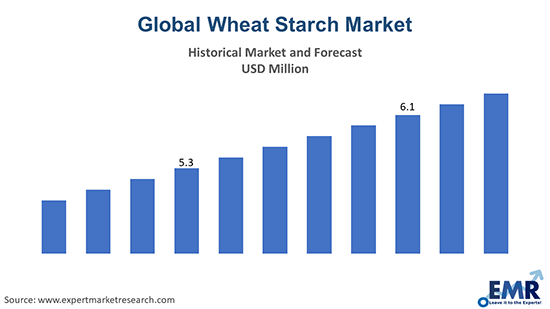 The overall increase in starch production and consumption is expected to aid the growth of the industry. Europe is the largest producer of wheat starch, globally. In 2016, the European Union starch production level reached 9.3 million tons and surpassed 9.4 million tons in 2017. Starch was produced in almost 75 plants across 20 European Union nations in 2017. This affected the growth rate of wheat starch as it is the dominant form of starch followed by corn and potato starch in the European Union.

Wheat starch is an essential part of the food sector, where it is used in food as a thickening agent. It is an emulsifier, stabilizer, and glazing agent that serves not only as a fat substitute but has applications in the creation of gels and adhesives. It is also useful in binding food. It is used in the preparation of gluten-free and low-calorie food. Its two major types are as follows: 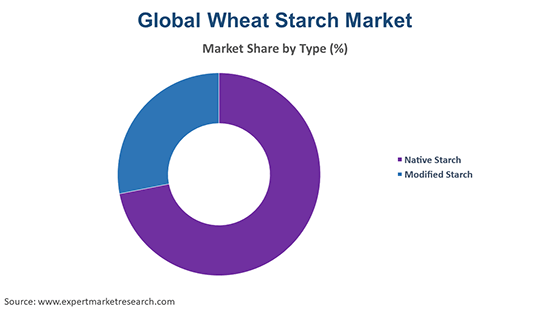 The product finds end-use in the following industries:

The report also covers the major regions in the global wheat starch market like North America, Europe, the Middle East and Africa, the Asia Pacific, and Latin America. 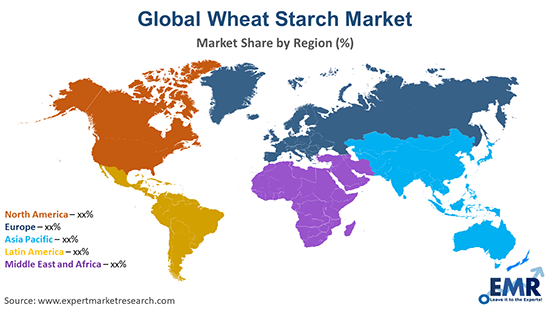 The rising global population, especially the increasing middle-class population, is aiding the growth of the global wheat starch market. The rapidly growing urbanisation and the increasing demand for processed food are further aiding the industry growth. Wheat starch is a healthier alternative due to its low-calorie and gluten-free content. With growing health consciousness among people leading to consumers switching to healthier food options, the industry is further expected to grow.

The rapid growth in the demand for personal hygiene and grooming products like cleansers, dry shampoo, and lotions, among others, has also led to the growing demand for wheat starch, which is added to these products. With globalisation and the increase in the varieties of personal care products, the wheat starch industry is being further propelled forward.

The report gives a detailed analysis of the following key players in the global wheat starch market, covering their competitive landscape, capacity, and latest developments like mergers, acquisitions, and investments, expansions of capacity, and plant turnarounds:

What was the market size of the global wheat starch market in 2022?

The global market for wheat starch reached a size of 6.45 million tons in 2022.

What will be the global wheat starch market growth rate during 2023-2028?

What will be the global wheat starch market value in 2028?

The rising demand for processed and fast foods and the consequent increasing health consciousness among people can aid the market growth due to wheat starch being a low-calorie and gluten-free alternative.

What are the key trends in the global wheat starch market?

The growing demand for organic personal hygiene and grooming products and the increasing variety of personal care products is expected to deliver new growth opportunities to the market.

What are the major regional markets?

The regional markets for the global wheat starch market include North America, Europe, the Asia Pacific, Latin America, the Middle East and Africa.

What are the types of wheat starch in the market?

The types of wheat starch available in the market include native starch and modified starch.

What is the end-use of wheat starch in the market?

Wheat starch products are utilised in various fields including sweeteners, fuel, paper and textiles, and food, among others.

Why is wheat starch used in the food industry?

Wheat starch is widely utilised in many types of foods to improve the texture, viscosity, gel formation, adhesion, binding, moisture retention, and as a fat substitute.

Who are the key global wheat starch market players, according to the report?

The key players in the market include Cargill Incorporated, ADM, Roquette Freres, Tereos, AGRANA Beteiligungs-AG, and Tate and Lyle, among others.

The global wheat starch market stood at a volume of 6.45 million metric tons in 2022. The rising demand for the product is being driven by the growing global population and rising food demand. Aided by the rising health consciousness among consumers, leading to an increasing demand for low-calorie sweeteners and gluten-free food, the industry is expected to grow further in the forecast period of 2023-2028 at a CAGR of 1.1% to reach 6.88 million tons by 2028.

EMR’s meticulous research methodology delves deep into the industry, covering the macro and micro aspects of the industry. Based on its types, the global wheat starch market can be segmented into native starch and modified starch. On the basis of end-use, the industry can be divided into sweeteners, fuel, paper and textiles, and food, among others. The major regional markets for the product are North America, Europe, the Asia Pacific, Latin America, and the Middle East and Africa, with Europe accounting for the largest share of the market. The key players in the above industry include Cargill Incorporated, ADM, Roquette Freres, Tereos, AGRANA Beteiligungs-AG, and Tate and Lyle, among others.