The global output for acetone reached a volume of nearly 7 million metric tons in 2020. The demand is estimated to grow at a CAGR of 3.4% in the forecast period of 2023-2028 owing to the growing end-use industries. 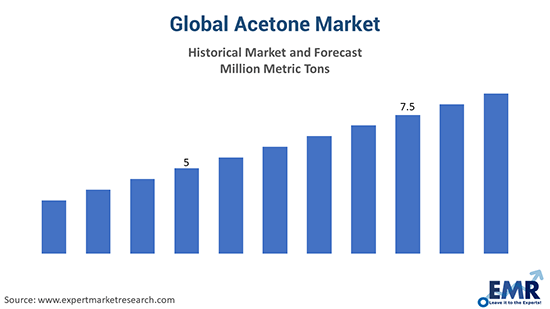 Asia Pacific to be the Largest Regional Market for Acetone

The Asia Pacific is the largest acetone market, accounting for almost 46% of the global share, followed by the European Union and North America. China, one of the significant regions in the Asia Pacific, is the centre of acetone production. China is also a significant importer of acetone, importing majorly from countries including Taiwan, Thailand, and South Korea, among others. The other countries that import acetone to the Asia Pacific include the Unites States and Belgium. However, the import and export rates in the Asia Pacific witnessed a fall in 2018 due to rising domestic demand from construction and automobiles industries.

International manufacturers have shifted their manufacturing units to the region due to affordable infrastructure and labour costs. Emerging economies, growing industrialization, and rising purchasing power are projected to continue contributing to the demand for chemicals from regional end-use industries. China is expected to be a leading consumer and manufacturer of acetone and is anticipated to continue its dominance owing to its increasing consumption as a solvent. Moreover, the acetone market participants in China have benefited from a plentiful supply of raw materials, putting more pressure on other regional and global suppliers.

Europe to Witness Robust Growth in the Coming Years

Europe follows the Asia Pacific in terms of the largest acetone market. It is the largest exporter of acetone globally, significantly exporting to countries like Turkey, China, India, and the United States. Europe’s acetone market is also supported by its rapidly growing cosmetic market, which uses acetone in regulated measures. The demand meets the acetone supply in the region, and thus, the region is self-sufficient in terms of acetone. 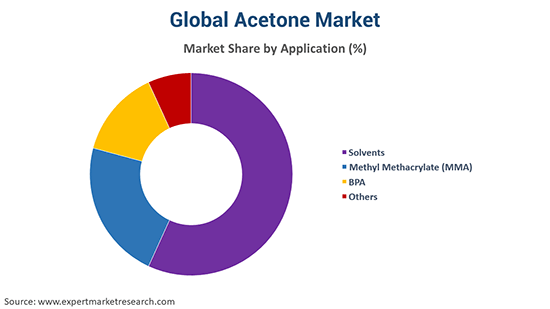 Acetone refers to a simple organic compound used in the production of bulk pharmaceuticals, agrochemicals, dyestuffs, other explosives, and downstream chemicals.
The significant applications of the market are:

The regional markets for the acetone market can be divided into North America, Europe, the Asia Pacific, Latin America, the Middle East and Africa. 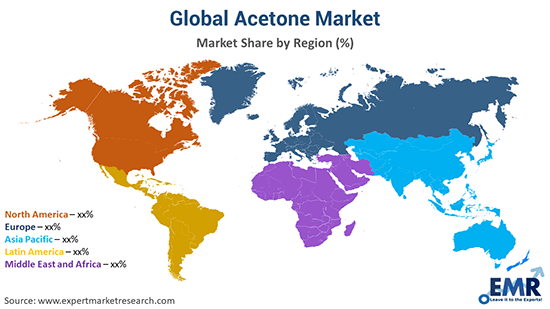 The acetone market is majorly driven by the growing end-use industries, which include BPA and MMA, especially in the developing regions like India and China. The growth is expected to be driven by factors such as increased use of acetone as a solvent and high demand in the pharmaceutical, cosmetics, and paints and adhesives industries. It is one of the most common solvents used in nail polish removers and cleansers in cosmetics. Product usage is also driven by favourable physical qualities, such as low boiling point and miscibility in water, which is expected to boost the global market in the next years. Acetone is also widely used in the production of epoxy resins as well as polycarbonate. The increasing markets of both these products are likely to support the demand growth of acetone in the coming years. Additionally, the market growth is also driven by the growing market for household cleaning products. The demand is driven by the increasing awareness about hygiene among consumers, especially the younger generation. The growth is also aided by the rising disposable income of the population.

Key Players in the Global Market for Acetone

The report gives a detailed analysis of the following key players in the global acetone market, covering their competitive landscape, capacity, and latest developments like mergers, acquisitions, and investments, expansions of capacity, and plant turnarounds:

What was the global acetone market size in 2020?

In 2020, the global acetone market attained a volume of nearly 7 million metric tons.

The market is estimated to witness a healthy growth in the forecast period of 2023-2028 to reach a volume of around 8.6 million metric tons by 2026.

The major drivers of the industry, such as the rising disposable incomes, increasing hygiene awareness, rapidly growing cosmetic market, and the growing end-use industries, are expected to aid the market growth.

What are the key industry trends of the global acetone market?

The rising beauty and personal care industry is expected to define the market growth in the coming years.

What are the major regional markets of acetone, according to the market report?

The major regions in the industry are North America, Latin America, the Middle East and Africa, Europe, and the Asia Pacific, with the Asia Pacific accounting for the largest share in the market.

What are the leading applications of acetone in the industry?

Solvents, methyl methacrylate (MMA), and BPA, among others are the leading applications of acetone in the industry.

The global acetone market attained a volume of nearly 7 million metric tons in 2020, driven by the increasing hygiene awareness. Aided by the rising beauty and personal care industry, the market is expected to witness a further growth in the forecast period of 2023-2028, growing at a CAGR of 3.4%. The acetone market is projected to reach a volume of around 8.6 million metric tons by 2026.

EMR’s meticulous research methodology delves deep into the market, covering the macro and micro aspects of the industry. Based on applications, the market can be segmented into solvents, methyl methacrylate (MMA), and BPA, among others. The major regional markets for acetones are North America, Europe, the Asia Pacific, Latin America, and the Middle East and Africa, with the Asia Pacific accounting for the largest share of the market. The key players in the above market include Shell Chemicals, INEOS Group Holdings S.A., Cepsa Química, S.A., LG Chem, Honeywell International Inc., Versalis S.p.A., Mitsui Chemicals Group, Formosa Chemicals and Fibre Corporation, Altivia, Hindustan Organic Chemicals Limited, and SI Group, Inc., among others.