Global Chlor-Alkali Market to be Aided by the Global Caustic Soda Market, Expected to Grow at a CAGR of 4.5% between 2021 and 2026.

The global chlor-alkali market is supported by the caustic soda market. The caustic soda demand reached a volume of around 82 million metric tons in 2020. The demand is expected to grow at a CAGR of around 4.5% between 2023 and 2028. 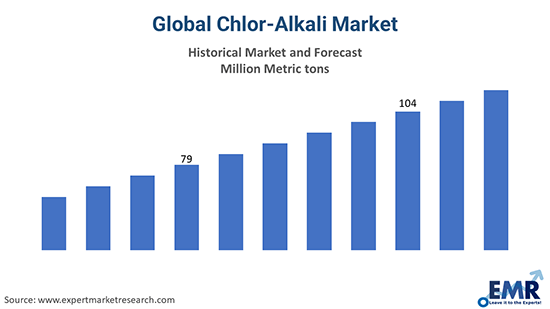 Asia Pacific Accounting for a Significant Market Share of Chlor-Alkali

The supply market is led by the Asia Pacific region, accounting for more than half of the total share, that is, around 55% of the total market share. The region is witnessing an increased demand for caustic soda owing to the rising application of paper, food, and beverages, synthetic fibre, and personal care products. The demand in the Asia Pacific region is expected to be higher than the western countries. The application sector is dominated by the alumina as well as soaps and detergents industries in 2018. With the new environment-friendly policies in China, the water treatment activities are likely to increase. With the increase in these activities, the demand for caustic soda is also expected to grow, which is anticipated to boost the chlor-alkali market. The Asia Pacific region is the largest exporter of caustic soda. The Northeast Asian countries export caustic soda to regions like Australia and Papua Guinea.

The Asia Pacific is followed by North America and the European Union as the other major supply markets. The major driving factors for the global chlor-alkali market include the growing market and demand for chemicals, paper and pulp, and soaps and detergents. The United States and Asia export significant volumes of caustic soda to the other regions. While the United States exports to Latin America, Asian and Middle Eastern countries export to European and African countries. Australia also imports a considerable volume of the chlor-alkali.

Chlor-alkali refers to the two chemicals, namely, chlorine and alkali, that are produced at the same time as a result of saltwater electrolysis. The most prevalent chlor-alkali chemicals include chlorine as well as sodium hydroxide (caustic soda) but may include potassium hydroxide and muriatic acid also.

Based on products, the chlor-alkali market can be divided into caustic soda, soda ash, and chlorine.

Caustic soda finds its applications in the following sectors:

Soda ash, meanwhile, finds its applications in the following segments:

Chlorine finds its applications in the following industries: 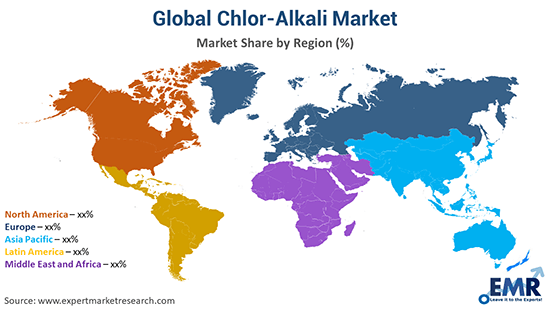 The alumina industry, which is likely to witness a healthy and steady growth in the forecast period due to increasing demand from the domestic applications, is driving the caustic soda market growth. The growing demand for automobiles in Latin America is driving the demand for aluminium, which is used in alumina smelting. The growing demand for both organic and non-organic chemicals, which are the end use-industries, is going to aid the growth of the chlor-alkali market. The thriving demand for inorganic chemicals, which is a significant end-use industry for caustic soda, is providing an impetus to the overall market.

The EDC/PVC segment is likely to witness significant demand over the forecast period. This could be attributed to the various favourable characteristics of polyvinyl chloride (PVC), including its malleability, lightweight, low-cost, and easy to install and handle. The increased usage of PVC in the home construction industry as it is employed as a replacement for metal pipes, is aiding the market growth. Further, PVC is also used in the healthcare sector to make blood bags, feeding tubes, intravenous (IV) bags, and parts of dialysis devices, among others. Moreover, features like biocompatibility, clarity and transparency, resistance to chemical stress cracking, and low thermal conductivity, are expected to boost the EDC/PVC segment in the global chlor-alkali market over the coming years.

Key Players in the Global Market for Chlor-Alkali

The report gives a detailed analysis of the following key players in the global chlor-alkali market, covering their competitive landscape, capacity, and latest developments like mergers, acquisitions, and investments, expansions of capacity, and plant turnarounds:

The comprehensive EMR report provides an in-depth assessment of the market based on Porter’s five forces model, along with giving a SWOT analysis. This report also provides price and trade data analysis for the chlor-alkali market.

What was the global chlor-alkali market size in 2020?

The global chlor-alkali market is supported by caustic soda market which attained a volume of nearly 82 MMT in 2020.

The market is supported by caustic soda market which is projected to grow at a CAGR of 4.5% between 2021 and 2026.

The market is supported by caustic soda market which is estimated to witness a healthy growth in the forecast period of 2023-2028 to reach 107 MMT by 2026.

The major industry drivers are increased demand for caustic soda owing to the rising application of paper, food, and beverages, synthetic fibre, and personal care products.

What are the key industry trends of the global chlor-alkali market?

The key trends in the market are increasing application in the CPG industries and growing demand for automobiles.

What are the major regional markets of chlor-alkali, according to the EMR report?

What are the products of chlor-alkali in the industry?

The products of chlor-alkali in the industry are caustic soda, soda ash and chlorine.

The global chlor-alkali market attained a volume of 82 MMT in 2020, driven by the increased demand for caustic soda owing to the rising application of paper, food, and beverages, synthetic fibre, and personal care products. Aided by increasing application in the CPG industries and growing demand for automobiles, the market is expected to witness a further growth in the forecast period of 2023-2028, growing at a CAGR of 4.5%. The market is projected to reach 107 MMT by 2026.

EMR’s meticulous research methodology delves deep into the market, covering the macro and micro aspects of the industry. Based on its products, the chlor-alkali industry can be segmented into caustic soda, soda ash, and chlorine. The major regional markets for chlor-alkali are North America, Europe, the Asia Pacific, Latin America, and the Middle East and Africa, with Asia Pacific accounting for the largest share of the market. The key players in the above market include Occidental Petroleum Corporation, Olin Corporation, Formosa Plastics Corporation, Akzo Nobel NV, Tosoh Corporation, INOVYN, Genesis Energy, L.P., Tata Chemicals Ltd., Ciner Resources Corporation, SHANDONG OCEAN CHEMICAL CO., LTD, and Haohua Junhua Group Co., Ltd., among others.