The global chocolate market is being driven by the changing consumer lifestyle and inflating disposable incomes in the emerging economies. North America is a leading region for the industry, along with Europe. The United Kingdom and Germany are some of the significant chocolate markets within Europe. The Asia Pacific is expected to be one of the fastest-growing regions, especially India and China, owing to the growing influence of the Western lifestyle and the rising awareness of the related health benefits of chocolate consumption. These emerging markets, such as India and China, are expected to provide a substantial push for the industry growth during the seasonal and festive sales.

The cocoa beans now account for about 75% of the total chocolate contributed by and produced in Africa. The Ivory Coast is a leading producer within the industry, followed by Ghana and Indonesia. Europe is a major consumer of chocolate, contributing one-third to the global chocolate sales. The market in Europe is, however, largely saturated and highly competitive. Switzerland happens to be the largest consumer of chocolate globally, with each person consuming up to 8.8 kg of chocolate per year. The United States, meanwhile, accounts for about a fifth of the chocolate consumption globally. 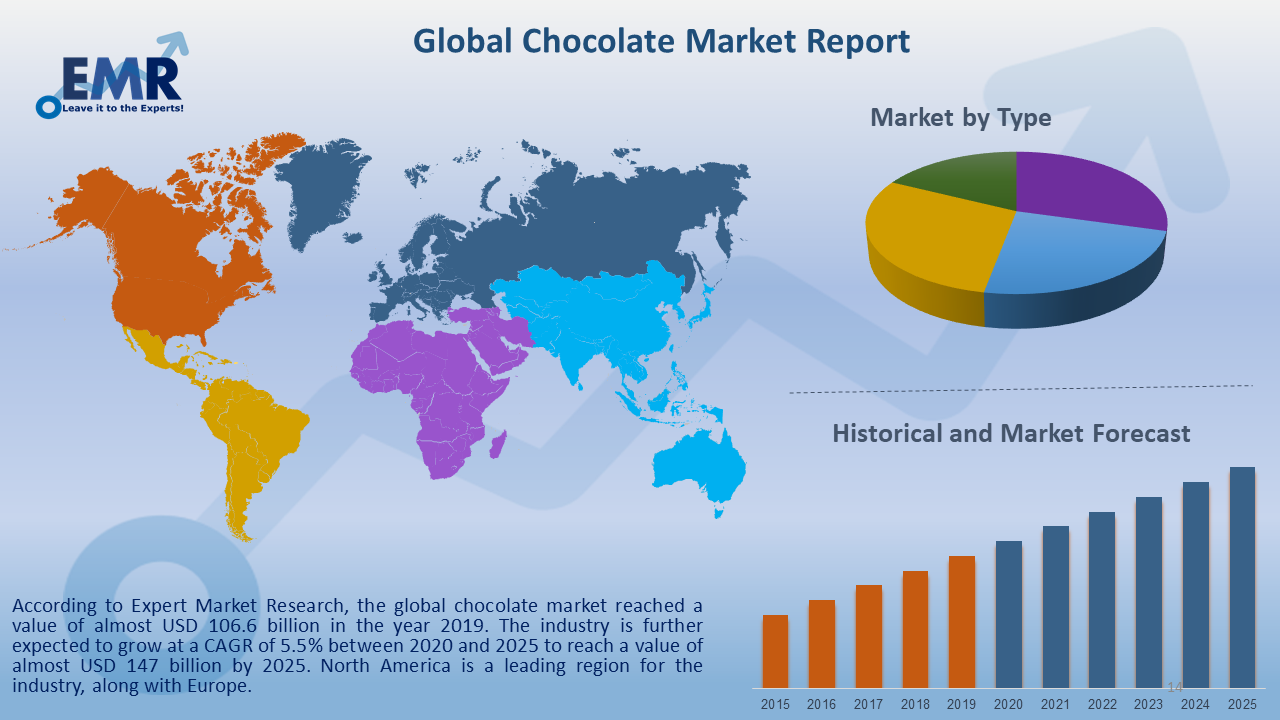 Chocolate is the food which is in the form of a paste or a solid block extracted from roasted and ground cacao seeds, usually sweetened and subsequently eaten as confectionery. The cocoa butter churns into a usable product during the chocolate production process in order to become a confection.

The chocolate market is divided on the basis of type into:

On the basis of packaging, the industry is divided into:

Based on the distribution channel, the industry is divided into:

The report also covers the regional chocolate markets like North America, Europe, the Asia Pacific, Latin America, and the Middle East and Africa.

The global chocolate market is driven by the impulse buying behaviour of consumers across the globe. Children and grown-ups buy chocolates regardless of their economic situation as chocolates are related to impulse purchases. The industry is aided by the inflating income levels and the shifting lifestyles of the consumers. The chocolate market is further enhanced by the dynamic packaging of the chocolates as it enables a manufacturer to receive a prompt and spontaneous response from consumers. The accelerating urbanisation and prevalent availability of chocolate and derived products are expected to boost the industry.

The product has anti-ageing properties, extends antioxidants-enrichment, and has a blood pressure-suppressing character, further promoting the chocolate market growth. Dark chocolate has a large proportion of cocoa, which is recommended to prevent ageing and certain diseases, like CVDs. Some recent research findings show that consuming chocolate helps in relieving stress. The wide range of new applications of the product within food and confectionery products is expected to drive the chocolate market demand.

Chocolate has the potential for further market growth and has showcased itself as a multibillion-dollar worth industry in the past decade. Within developed countries, chocolate has established and thriving markets. The younger population within the emerging countries represent the leading consumers, boosting the chocolate market growth. The chocolate market is further aided by the growth of the food services sector and value addition. The chocolate market is extremely dynamic and has provided the impetus in replacing the traditional sweets within developing countries. The presence of regional brands within countries such as Japan, South Korea, India, and China, has catalysed the sales of chocolates during recent years. Multinational brands have also gained popularity in these countries, on account of changing taste preferences and rising brand loyalty.

The report gives a detailed analysis of the following key players in the global chocolate market, covering their competitive landscape, capacity, and latest developments like mergers, acquisitions, and investments, expansions of capacity, and plant turnarounds:

The comprehensive EMR report provides an in-depth assessment of the chocolate market based on the Porter's five forces model, along with giving a SWOT analysis. The report also gives an overview of the feedstock industry of the chocolate market, looking into the derivatives, applications, and regional markets of cocoa.

What was the global chocolate market size in 2019?

In 2019, the global chocolate market attained a value of nearly USD 106.6 billion.

The major drivers of the industry such as rising disposable incomes, increasing population, increasing awareness of health benefits of the product, diversification of products, and changing lifestyles are expected to aid the market growth.

What are the key industry trends of the global chocolate market?

The growing demand for fair trade chocolate and innovation in flavours are expected to be the major trends in the market.

What are the major regions of chocolate according to the market report?

The leading regions in the industry are North America, Europe, the Asia Pacific, Latin America, and the Middle East and Africa, with North America accounting for the largest market share.

The major types of chocolate are white, and dark, among others.

What are the significant packaging types in the market?

The significant packaging types in the market are rigid and flexible.

What are the leading distribution channels of chocolate?

The major distribution channels in the industry are supermarkets/ hypermarkets, specialist retailers, convenience stores, and online, among others.

The global chocolate market attained a value of USD 106.6 billion in 2019 driven by the changing lifestyles of the consumers. Aided by the diversification of the product portfolios, the market is expected to witness a further growth in the forecast period of 2020-2025, growing at a CAGR of 5.5%. The industry is projected to reach USD 147 billion by 2025.

EMR’s meticulous research methodology delves deep into the industry, covering the macro and micro aspects of the industry. Based on its types, the market can be segmented into milk, white, dark, and other chocolates. On the basis of packaging, the industry is bifurcated into rigid and flexible packaging. The major distribution channels in the industry are supermarkets/ hypermarkets, specialist retailers, convenience stores, and online, among others. The major regional markets for chocolate are North America, Europe, the Asia Pacific, Latin America, and the Middle East and Africa. The key players in the above industry include Nestlé S.A., Ferrero U.S.A., Inc., Mondel?z International, The Hershey Company, Lindt & Sprüngli AG, Barry Callebaut AG, and Mars, Incorporated, among others.

EMR’s research methodology uses a combination of cutting-edge analytical tools and the expertise of their highly accomplished team, thus, providing their customers with industry insights that are accurate, actionable, and help them remain ahead of their competition.

The global dark chocolate market size was almost USD 48.1 billion in 2019. The industry is further expected to grow at a CAGR of 7% over the forecast period of 2020-2025 to attain a value of almost US...
Read More

The global white chocolate market attained a value of USD 18 billion in 2019. The market is further anticipated to reach USD 19.7 billion by 2025, growing at a CAGR of 1.5% over the forecast period of...
Read More

The Asia Pacific confectionery market is being driven by the shift in consumer preferences owing to the rising disposable incomes and rapidly developing emerging economies within the region. The indus...
Read More

The North America confectionery market is being driven by the growing USA market. The USA confectionery industry was worth nearly USD 25.24 billion in 2019. The US market is expected to grow at a stea...
Read More