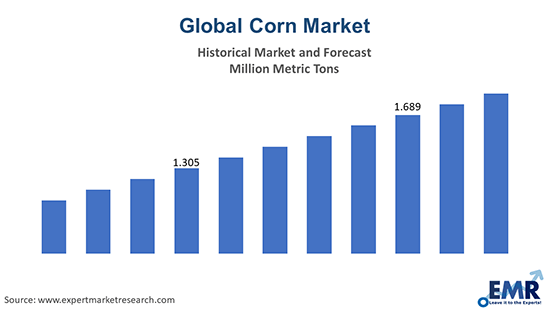 The significant consuming markets for corn include the United States, China, the European Union, Mexico, and Brazil. This growing demand in these regions is supported by the end-use sectors like the animal feed and corn starch markets. The United States and China are among the largest consumers owing to the rapidly growing end-use sectors of corn in these regions. The countries that rely on imports are Mexico, Japan, South Korea, the European Union, and Egypt. The rising demand for corn in the United States is due to the expansion of the feed and industrial sectors. Corn is a source of carbohydrates and so forms an effective diet for livestock. The dominant application sector in the country is animal feed, followed by fuel ethanol. Meanwhile, the growing corn starch processing in China is driving the market demand, as China is the leading key player in corn starch production. The country also accounts for a significant market share in other application sectors like HFCS and polyols.

The global corn market is being driven by the capacity expansions by key market players. Major players, including Archer Daniels Midland Co (NYSE: ADM) as well as Tate & Lyle Plc, are expanding their production capacity and investing in mergers and acquisitions to enhance their output.

Corn refers to the yellow or white corn seeds, used mainly as livestock feed and as food for humans. It is also known as maize or Indian corn, a cereal plant belonging to the grass family called Poaceae, which has edible grain. The domesticated plant originated in the Americas, especially Mexico, and is among the most widely distributed food crops in the world. 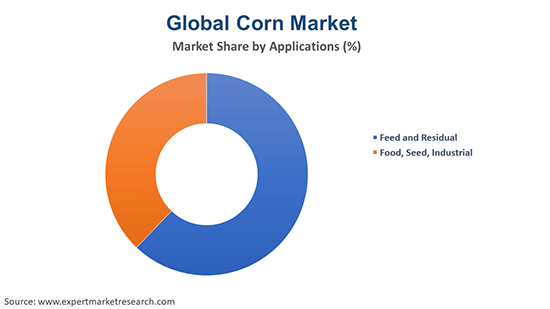 Corn finds its applications in the following segments:

The EMR report also covers the regional markets of corn like North America, Europe, the Asia Pacific, Latin America, and the Middle East and Africa. 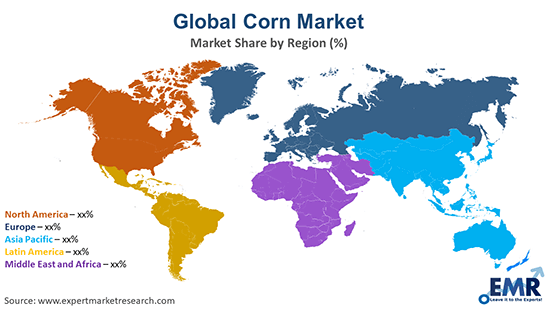 The global corn market is being driven by the increasing applications of corn in various end-use sectors. Corn is widely used in the production of corn starch, which is further utilised in food ingredients, papers, ethanol, and sweeteners, among others. Corn is also used in the production of animal feed. The growing demand for all these products is providing an impetus to the market. The increasing demand for animal feed, as well as ethanol, has resulted in increased production of the crop. Corn is used in making biofuel because of the content of the starch present, and it can easily be converted into ethanol.

The rapidly rising demand for the product in the United States and China is mainly driven by the increasing use of the crop in various end-use sectors. The United States is a significant confectionery market, which is propelling the demand for corn starch owing to its use in sorbitol and sweeteners production. The growing demand for sorbitol, which is an end-use segment, is supporting the growth of the market. Sorbitol is abundantly used due to its low-calorie content among the health-conscious population. Sorbitol has wide applications in personal care products and pharmaceuticals. The corn market is also being driven by the easy availability and low manufacturing cost of the product. The favourable policies of the government, as well as the increasing FDI flows for both pharmaceuticals and personal care products, have aided the growth of the market, especially in the Asia Pacific region. India and China represent the major emerging markets for the product in the Asia Pacific.

The growing awareness about the health benefits of corn is resulting in its increased consumption. The intake of corn can lead to better gut health and lower the chances of diseases like cancer, heart disease, and type 2 diabetes. Also, yellow corn is a good source of the carotenoids like lutein and zeaxanthin, which boost eye health and prevent cataracts. The expanding production of corn, particularly in South Asian countries, due to their favourable geographical location and climatic conditions, is playing a critical role in the market development. The steps taken by the governments to boost the production of maize are providing impetus to the market expansion. For instance, in May 2022, the Government of India announced to increase maize production, encouraging farmers for the same through various initiatives to meet the demand from diverse sectors like poultry and ethanol production. The ongoing research and development activities to enhance the corn yield and maximise profit are likely to aid the market over the forecast period.

Key Players in the Global Market for Corn

The report gives a detailed analysis of the following key players (corn starch and derivatives) in the global corn market, covering their competitive landscape, capacity, and latest developments like mergers, acquisitions, and investments, expansions of capacity, and plant turnarounds:

What was the global corn market size in 2020?

In 2020, the global corn market attained a volume of nearly 1118 million metric tons.

The market is being driven by the growing demand for sorbitol and the rising use of corn in end-use industries, such as personal care and pharmaceuticals, among others.

What are the key industry trends of the global corn market?

The market growth is anticipated to be defined by the rising demand for corn in the animal feed industry, along with its growing uses as ethanol fuel, in the coming years.

What are the major regional markets of corn, according to the EMR report?

What are the significant applications of corn?

The significant applications of corn include feed and residual, and food, seed, industrial.

The global corn market attained a volume of about 1118 million metric tons in 2020, driven by the rising demand for corn from end-use industries. Aided by the increasing applications of corn in the animal feed and its use as ethanol fuel, the market is expected to witness a further growth in the forecast period of 2021-2026, growing at a CAGR of 5.3%.

EMR’s meticulous research methodology delves deep into the market, covering the macro and micro aspects of the industry. On the basis of application, the corn industry can be segmented into feed and residual, and food, seed, industrial. The major regional markets for corn are North America, Europe, the Asia Pacific, Latin America, and the Middle East and Africa. The key players in the above market include Archer Daniels Midland Company, Cargill Inc., Ingredion Inc., Tate & Lyle Plc, Roquette Frères, and Tereos SA.