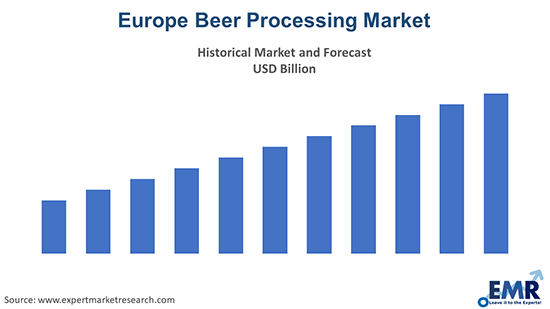 The United Kingdom followed Germany as the leading producer and consumer of beer in 2017. In 2017, the United Kingdom consumed 44, 051 thousand hectolitres of the alcoholic beverage while producing nearly 40, 480 thousand hectolitres. The beer processing industry in the United Kingdom is, thus, aided by the high production and consumption of the alcoholic beverage in the country. The industry in the country is also aided by the robust growth of the craft beer segment and the healthy increase of independent brewers in the country. Spain and Poland are the other significant regional markets within Europe, having robust consumption and production rates.

Beer is produced by steeping starch sources like barley or other cereals in water and fermenting the resultant liquid with yeast. Beer processing involves multiple steps like malting, mashing, filtering, and packaging, among others. It also involves the modification of the raw material compositions and the addition of taste-enhancing ingredients. 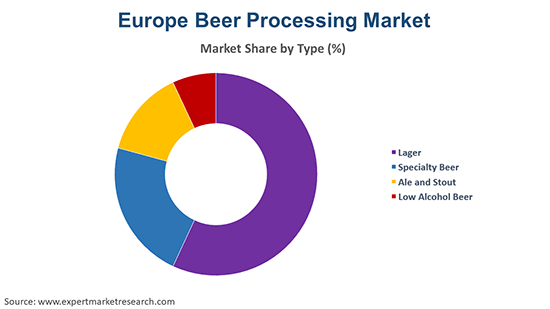 The common types of processed beers available in the industry are:

The distribution channels for these products are hypermarkets and supermarkets, liquor stores, and convenience stores, among others. The major regions for the market in Europe are: 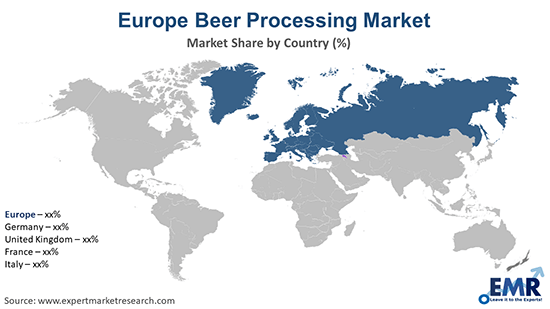 The Europe beer processing market is being driven by the rising number of microbreweries and small and medium-sized enterprises within the region. Between 2014 and 2018, the number of microbreweries nearly doubled in Europe to reach an approximate 9500 breweries in 2018. The rise in microbreweries is aided by the rise in the demand for craft beers in the continent as consumers are increasingly seeking out beers, which are made locally by independent brewers. The craft beer segment is also propelling the growth of the Europe beer processing market as retailers and restaurants are seeking to expand their offerings to include products from local breweries.

The industry is also being aided by the improving standards of living and growing disposable incomes in the region. The higher disposable incomes are driving the growth of the speciality and premium segments. The rising beer industry in Eastern Europe is also expected to aid the industry growth. The industry is also being aided by the rising innovation in the industry as consumers are increasingly willing to experiment with new flavours. The increasing demand for low alcohol and alcohol-free beer is also expected to drive the industry growth in the coming years.

October 2020- The Carlsberg Group has reached an agreement to acquire the remaining 25% stake in the leading Cambodian brewer, Cambrew, which produces the iconic brand, Angkor Premium Beer.

October 2016- Heineken N.V. completed its acquisition of 50% shareholding in the US craft brewer, Lagunitas Brewing Company.

The report analyses the following key players in the Europe beer processing market, covering their competitive landscape, capacity, and latest developments like expansions of capacity, plant turnarounds, and mergers, expansions, and investments:

The EMR report looks in-depth into the micro and macro aspects of the industry. It assesses the market based on Porter’s Five Forces model, along with providing a SWOT analysis. It also gives a thorough analysis of the trade data and price trends within the industry. An overview of the global as well as other regional markets like North America, Latin America, the Asia Pacific, and the Middle East and Africa has been provided within the report, as well.

What was the Europe beer processing market size in 2019?

The Europe beer processing market reached a value of USD 676 billion in 2020.

The major drivers of the industry include the growing number of micro-breweries and small and medium-sized companies in the area.

What are the key industry trends of the Europe beer processing market?

With supermarkets and restaurants extending their ranges to include items from local brewers and craft beer, the market is expected to witness a healthy growth.

What are the major regional markets of beer processing in Europe, according to the market report?

The major regions in the industry are Germany, the United Kingdom, France, and Russia, among others.

What are the leading types of beer processing in the industry?

The leading types of beer processing in the industry are lager, speciality beer, ale and stout, and low alcohol beer.

The major distribution channels in the market are hypermarkets and supermarkets, liquor stores, and convenience stores, among others.

Who are the key industry players in the market, according to the report?

The Europe beer processing market attained a value of USD 676 billion in 2020, driven by the rising beer industry in Eastern Europe. The growing creativity of products is also benefiting the market as customers are constantly able to play with new flavours. The rising demand for low alcohol and alcohol-free beer is also expected to fuel growth in the industry in the coming years. The market is projected to grow at a CAGR of 4% in the forecast period of 2023-2028 to reach USD 855.4 billion by 2026.

EMR’s meticulous research methodology delves deep into the market, covering the macro and micro aspects of the industry. Based on type, the industry can be segmented into lager, specialty beer, ale and stout, and low alcohol beer. On the basis of distribution channel, the industry can be segmented into hypermarkets and supermarkets, liquor stores, convenience stores, and others. The major regional markets for beer processing in Europe are Germany, the United Kingdom, France, and Russia, among others. The key players of beer processing in Europe in the above market include Anheuser-Busch InBev SA/NV (NYSE: BUD), Heineken N.V., Carlsberg Group, Harboes Bryggeri A/S, and Oettinger Brauerei Gmbh, among others.