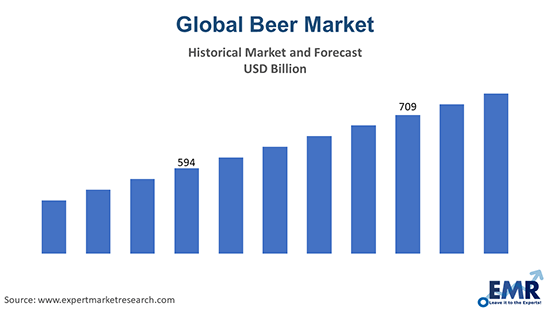 The global beer market has the Asia Pacific as the leading regional market, driven by product innovation and premiumisation. China, the United States, Mexico, Brazil, and Germany are the significant producers of beer, globally. Emerging markets such as China, India, Middle East and Africa, Latin America, and Eastern Europe are witnessing a fast-paced growth, whereas the demand for beer in developed markets like North America and Western Europe remain flat or are declining. 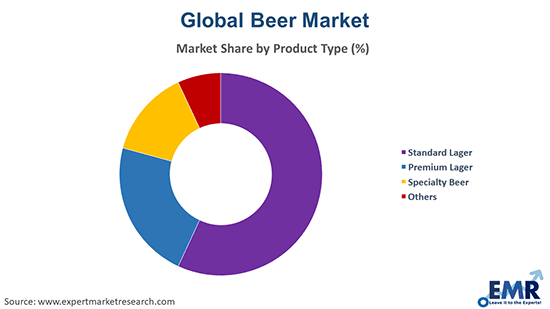 Beer is referred to as an alcoholic beverage made with hops, water, and various cereal grains, such as rice, wheat, corn, and rye. It has an alcohol content ranging from below 3% to 40% alcohol by volume (ABV), depending upon the style and recipe of the formulation. Beer is one of the largest consumed alcoholic beverages across the world.

The beer market, on the basis of product type, is segmented into:

On the basis of packaging, the beer market is divided into:

On the basis of production, the beer market is categorized into:

On the basis of alcohol content, the beer market is divided into:

On the basis of flavour, the beer market is bifurcated into:

On the basis of distribution channel, the beer market is divided into:

The report also covers the regional beer markets like North America, Europe, the Asia Pacific, Latin America, and the Middle East and Africa. 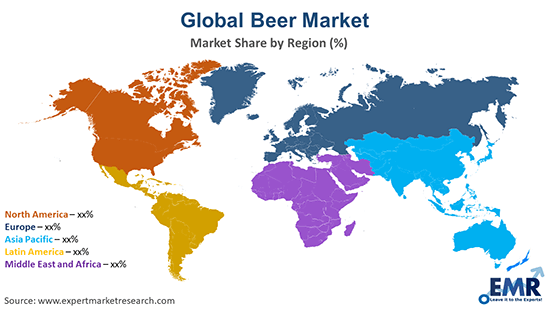 The global beer market is driven by the premiumisation of beer. Manufacturers are utilizing high-quality ingredients and advanced brewing techniques to produce superior and high-end products. The market is further impelled by the introduction of new flavours, including blueberry, strawberry, peach, chocolate, and lemon, by the manufacturers, which enhances the tastes and extend their customer base. For instance, American brewing company Anheuser-Busch’s Natural Light, a reduced-calorie light beer brand, recently launched Naturdays, a strawberry lemonade-flavoured beer. Further, the beer market is witnessing an increase in the demand for beer, particularly in emerging economies due to a large young population, leading to a rise in the investments by various international alcohol brands.

The report gives a detailed analysis of the following key players in the global beer market, covering their competitive landscape, capacity, and latest developments like mergers, acquisitions, and investments, expansions of capacity, and plant turnarounds:

What was the global beer market size in 2020?

The major drivers of the market such as rising disposable incomes, rising investments by industry players in emerging markets, growing earning younger population, and premiumisation of the product are expected to aid the market growth.

What are the key industry trends of the global beer market?

The introduction of low calorie and alcohol-free variants, along with new flavours like blueberry, strawberry, peach, chocolate, and lemon are the major trends expected to drive the market growth.

What are the major regions of beer according to the market report?

The leading product type in the market are standard lager, premium lager, and specialty beer, among others.

What are the significant packaging types in the industry?

Glass, PET bottle, and metal can, among others are the most significant packaging types in the industry.

What are the major production types in the industry?

By production, the major segments in the industry are macro- and micro-breweries, among others.

What are the prevailing alcohol contents of beer in the industry?

What are the significant favour types in the industry?

The leading flavour segments of the product in the industry are unflavoured and flavoured.

What are the leading distribution channels of beer?

Supermarkets and hypermarkets, on-trades, specialty stores, and convenience stores, among others, are the leading distribution channels in the industry.

The global beer market attained a value of USD 594.5 billion in 2020 driven by the growing disposable incomes and rising investments into emerging markets. Aided by the diversification of the product with the introduction of new flavours and low-calorie variants, the industry is expected to witness a further growth in the forecast period of 2021-2026, growing at a CAGR of 3%. The industry is projected to reach USD 709.9 billion by 2026.

EMR’s meticulous research methodology delves deep into the market, covering the macro and micro aspects of the industry. Based on product type, the global beer market is segmented into standard lager, premium lager, specialty beer, and others. On the basis of packaging, the market is categorised into glass, PET bottle, and metal can, among others. By production, the industry is divided into macro- and micro-breweries, among others. The alcohol content in the product can be high, low, or the product can be alcohol-free. Based on flavour, the industry can be divided into unflavoured and flavoured. Supermarkets and hypermarkets, on-trades, specialty stores, convenience stores, and others are the major distribution channels in the industry. The major regional markets for beer are North America, Europe, the Asia Pacific, Latin America, and the Middle East and Africa, with the Asia Pacific accounting for the largest share of the industry. The key players in the above industry include Asahi Group Holdings Ltd., Anheuser-Busch InBev, Carlsberg Group, Heineken N.V., Sierra Nevada Brewing Co, United Breweries Ltd, and The Smirnoff Co., among others.

The global fortified wine market is being aided by the growing demand from the developing regions . Aided by the rising product marketing, the market is expected to witness a moderate growth in the fo...
Read More