Global Flavoured Milk Market to Grow at a CAGR of 8% During 2021-2026, Driven by the Introduction of Innovative Flavours 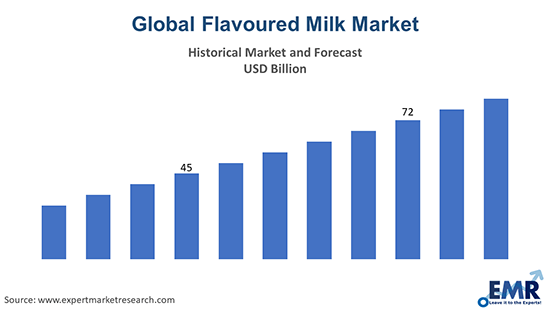 Based on flavours, the increased popularity of chocolate flavoured milk among children and adults has aided the growth of the segment. Additionally, the introduction of new flavours by the key players is likely to propel the market growth in the forecast period. Furthermore, manufacturers are increasing their commercialisation initiatives through different advertisement media like news and TV to increase consumer awareness in untapped markets.

Meanwhile, on the basis of distribution channel, online sales are likely to witness a robust growth in the forecast period, thus, further aiding the market growth.

The Asia Pacific to Dominate the Flavoured Milk Industry Globally

The Asia Pacific accounts for the largest share owing to the rising awareness regarding the nutritional benefits of flavoured milk and the increasing disposable income of people. China’s rapidly growing economy and the dramatic expansion of its manufacturing capabilities are propelling the market growth. The growing retail industry, improved health awareness, and increasing demand for healthy alternatives for carbonated drinks and other ready-to-drink items are driving the market growth further. Because of its many advantages, flavoured milk is witnessing increased popularity in India, thus, boosting the market growth. Also, the product demand in North America and Europe is also significant.

Flavoured milk is a sweetened dairy beverage that is sold as pasteurised, refrigerated product. It is made with sugar, milk, flavourings, and sometimes food colourings. It can also be easily made at home or restaurants by adding flavours to the milk. Flavoured milk is among the most popular milk-based beverages and is also regarded as a good alternative to regular milk as it has the same nutritional value as standard milk. The ultra-high-temperature (UHT) therapy pasteurises it, giving it a longer shelf-life than traditional milk. 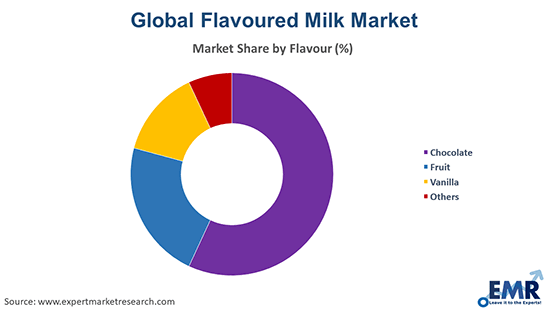 Based on flavour, the market is divided into:

Based on packaging, the industry can be segmented into:

On the basis of distribution channel, the industry can be categorised into: 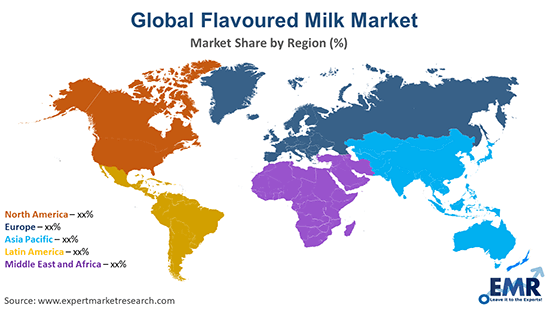 The global flavoured milk industry is driven by the rising inclination of consumer towards healthy lifestyle and changing dietary habits. Flavoured milk provides convenience, has a longer shelf-life, and can be consumed straight away without boiling. In contrast to soft drinks or not carbonated sweetened beverages, which comprises of about 40% of the added sugar, it adds just 4% of the added sugar. The demand for flavoured milk is likely to increase in the coming years as it provides various nutrients such as potassium, calcium, and magnesium, without compromising on the taste of the product.

Over the forecast period, the market is expected to be aided by factors like the increasing efforts by various companies to launch new flavours, growing mergers and acquisitions, and capacity expansions. However, the market growth may be hampered by the growing demand for soft drinks and protein-based drinks.

The report gives a detailed analysis of the following key players in the global flavoured milk market, covering their competitive landscape, capacity, and latest developments like mergers, acquisitions, and investments, expansions of capacity, and plant turnarounds:

What was the global flavoured milk market size in 2020?

In 2020, the global flavoured milk market attained a value of nearly USD 46 billion.

The major drivers of the market include the increasing disposable incomes of consumers, product diversifications, growing retail sales channels, and the growing demand from emerging economies.

What are the key industry trends of the global flavoured milk market?

The rising inclination of consumers towards healthy lifestyle is the key industry trend propelling the growth of the market.

What are the major regional markets of flavoured milk, according to the EMR report?

What are the leading flavours of flavoured milk in the market?

The leading flavours of flavoured milk in the market are chocolate, fruits, and vanilla, among others.

What are the significant packaging segments in the industry?

The significant packaging segments in the industry are paper based, plastic based, glass based, and metal based, among others.

What are the major distribution channels of the product in the market?

The major distribution channels of the product in the market are supermarket and hypermarket, convenience stores, specialty stores, and online, among others.

The global flavoured milk market attained a value of USD 46 billion in 2020, driven by the increasing disposable incomes of consumers. Aided by the rising inclination of consumers towards healthy lifestyle, the market is expected to witness a further growth in the forecast period of 2023-2028, growing at a CAGR of 8%. The market is projected to reach USD 73 billion by 2026.

EMR’s meticulous research methodology delves deep into the market, covering the macro and micro aspects of the industry. Based on flavour, the market is divided into chocolate, fruits, vanilla, and others. By packaging, the industry can be segmented into paper based, plastic based, glass based, metal based, and others. On the basis of distribution channel, the industry can be categorised into supermarket and hypermarket, convenience stores, speciality stores, online, and others. The major regional markets for flavoured milk are North America, Europe, the Asia Pacific, Latin America, and the Middle East and Africa. The key players in the above market include The Hershey Company, Saputo Inc., Nestlé S.A., Danone S.A., Arla Foods amba, Fonterra Co-orperative Group, Molkerei Alois Muller GmbH & Co. KG, Gujarat Cooperative Milk Marketing Federation Ltd., and others.