Corn starch accounts for the largest industry share in the global hydrocolloids market, followed by guar gum, xanthan gum, and carrageenan. India accounts for the largest share of the guar seed production and is the largest exporter of guar gum in the world. The country accounts for 80-85% of the global guar seed and gum production, followed by Pakistan. The future for guar is viewed to be optimistic, due to the large and continuous demand for guar, especially from North America, owing to the shale revolution and the investigation of new oil reserves in China. Asia and Europe are the major producers for xanthan gum, contributing about 80% of the product. The demand for xanthan gum is projected to increase owing to rising oil and gas production in China, along with the increasing demand for the product in the chemical and automobile industries. The demand for xanthan gum is expected to intensify due to the growth of the food and beverage industry in China, Malaysia, India, and Singapore in the forecast period.

Carrageenan has also witnessed increased production in recent years, with the Asia Pacific contributing to a significant portion of the production share. The industry is especially large in the Asia Pacific as compared to North America and Europe due to an increase in the demand from the fast and processed food sector, accelerating the industry in the Asia Pacific region. The Philippines is the largest producer of carrageenan, accounting for 77% of the world's supply of the hydrocolloid. In the Asia Pacific, China is the key exporter of carrageenan to the United States and Europe. The product is usually used in the confectionery industry in the United States for the suspension of chocolates. 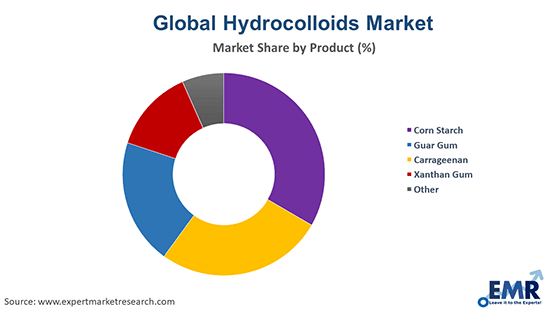 Hydrocolloid is defined as a colloid system that forms a gel when it comes in contact with water. It can be both reversible and irreversible (single state). For example, agar is a reversible hydrocolloid of seaweed extract and can exist in gel and solid-state, and change states through the use or avoidance of heat.

Based on products, the hydrocolloids market is segmented into:

Xanthan gum finds wide applications in food and beverages, oil and gas, pharmaceuticals, and cosmetics industries, among others.

The report also covers the regional hydrocolloids markets like North America, Europe, the Asia Pacific, Latin America, and the Middle East and Africa. 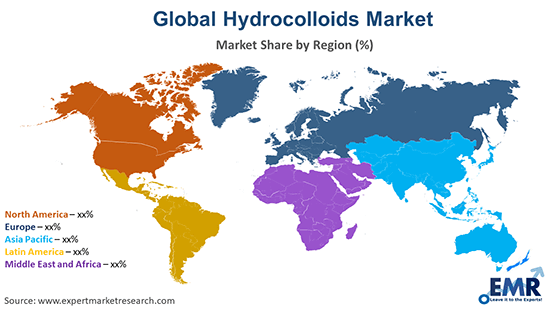 There is a considerable demand for guar gum due to its favourable properties, such as natural thickness and biodegradability, which is aiding the growth of the overall hydrocolloids market. The production of guar gum is expected to increase in the forecast period due to the expected rise in the guar production during the summer season. The guar gum industry is highly influenced by the oil and gas industry, owing to the usage of guar gum in the form of drilling aids to maintain viscosity and mitigate friction during oil well fracturing and stimulation process. Thus, the guar gum industry is growing at a steady pace due to the growth of the oil and gas industry.

The report gives a detailed analysis of the following key players in the global hydrocolloids market, covering their competitive landscape, capacity, and latest developments like mergers, acquisitions, and investments, expansions of capacity, and plant turnarounds:

What was the global hydrocolloids market size in 2020?

In 2020, the global hydrocolloids market attained a value of nearly USD 9.3 billion.

The major drivers of the market, such as the rising oil well drilling, strong pharma spending, huge demand from the food sector and the oil and gas industry, are expected to aid the market growth.

What are the key industry trends of the global hydrocolloids market?

The key market trend guiding the growth of the market includes the rising production of guar gum during the summer season.

What are the major regions of hydrocolloids, according to the market report?

What are the major products of hydrocolloids in the industry?

The major products of hydrocolloids in the industry are corn starch, guar gum, carrageenan, and xanthan gum, with corn starch leading the market.

The global hydrocolloids market attained a value of USD 9.3 billion in 2020, driven by the huge demand from the food sector and the oil and gas industry. Aided by the rising production of guar gum, the market is expected to witness a further growth in the forecast period of 2023-2028, growing at a CAGR of 6.5%. The market is projected to reach USD 13.6 billion by 2026.

EMR’s meticulous research methodology delves deep into the market, covering the macro and micro aspects of the industry. Based on its products, the market can be segmented into corn starch, guar gum, carrageenan, and xanthan gum, with corn starch accounting for the largest market share. The major regional markets for hydrocolloids are North America, Europe, the Asia Pacific, Latin America, and the Middle East and Africa, with North America accounting for the largest share of the market. The key players in the hydrocolloids market include Cargill, Incorporated, Archer Daniels Midland Company, Ingredion Incorporated, Kerry Group plc, Lotus Gums & Chemicals, and Daicel Corporation, among others.