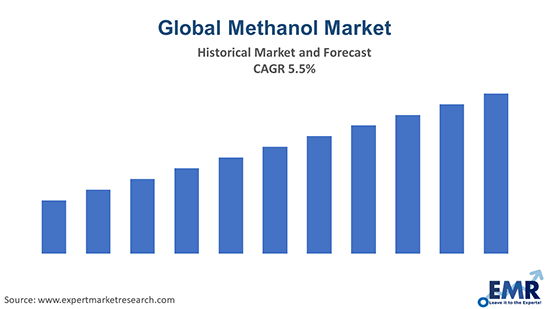 Based on application, the formaldehyde segment is anticipated to observe a significant growth in the forecast period. Methanol is used in the production of formaldehyde, which finds increased usage across industry verticals. Formaldehyde finds usage in the production of consumer products like furniture, carpeting, paper towel, and cosmetics, among others. In addition, the demand for formaldehyde in the automotive sector for manufacturing fuel system components and brake pads, among others and in the construction sector for producing plywood and particle board is expected to bolster the market growth in the forecast period.

The Asia Pacific region is anticipated to provide lucrative opportunities for the market expansion in the forecast period. The increased use of methanol derivatives such as acetic acid, formaldehyde, and MMA, among others, across industries is driving the market growth of methanol in the region. China currently represents the largest market for methanol, owing to the increased product demand in methanol gasoline blending and dimethyl ether (DME), its use as a clean transportation fuel, and the country’s ability to produce abundant quantities domestically. In China, methanol is priced at a far lower value compared to wholesale gasoline, and the country is focusing on the mass production of methanol capable vehicles, including fleets of taxis and buses. Thus, the growing demand for methanol in fuel applications in the transportation sector is anticipated to propel the market growth in the forecast period.

Methanol (CH3OH) is a light, volatile, flammable, and poisonous liquid alcohol, which is biodegradable in nature. It is also known as “wood alcohol”, and is a colourless, water soluble liquid with mild alcoholic odour. Liquid methanol provides an excellent way to conveniently and safely store and transport energy. It is a liquid chemical, which is commonly used in the production of everyday products including solvents, plastic, fuel, and cosmetics, among others. The biodegradability and clean combustion, along with a low boiling temperature also contribute to the increased product utilisation across sectors. 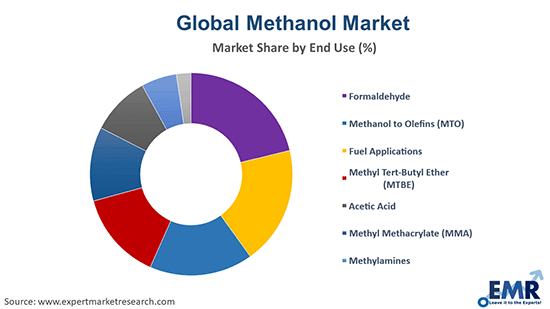 By application, the market is segregated into: 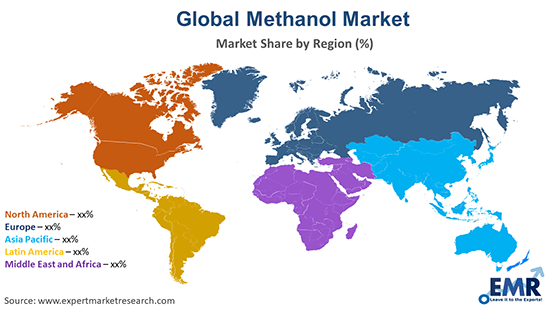 The market is being driven by the increasing applications of methanol across various end use industries. Methanol derivatives like formaldehyde, acetic acid, and MMA are used in the production of a variety of compounds and substances. For instance, fundamental chemical products like olefins can be produced via a methanol-to-olefin (MTO) process, along with various organic compounds like dimethyl ether (DME), a potential substitute for diesel oil which is used for its better combustion performance. In addition, acetic acid is used in the production of paints and adhesives, which are commonly utilised in the construction sector. Further, the growing use of methanol in manufacturing formaldehyde also supported the market growth, as formaldehyde is used in the healthcare sector to produce vaccines. The market is also supported by the rising demand in other application sectors including the energy sector, wherein it goes into the manufacturing of methyl tertiary butyl ether (MTBE), and methyl methacrylate (MMA), among others. Furthermore, the increasing use of methanol as a fuel in the automotive and aviation sectors is expected to drive its demand in the coming years. This can be attributed to the benefits of reduced fuel costs, efficient combustion, and low flammability associated with the use of methanol as a fuel alternative. The market is likely to benefit from the increased development of a methanol-based transportation system to promote the adoption of bio-methanol products obtained from timber, agricultural waste, and other renewable resources with rapid technological advancements.

The report gives a detailed analysis of the following key players in the global methanol market, covering their competitive landscape, capacity, and latest developments like mergers, acquisitions, and investments, expansions of capacity, and plant turnarounds:

The comprehensive EMR report provides an in-depth assessment of the market based on the Porter's five forces model and SWOT analysis.

The major industry drivers are extensive use in the automotive industry as a transportation fuel and antifreeze agent for automobile radiators.

What are the key industry trends of the global methanol market?

The key trends in the market are usage of methanol manufacturing of dimethyl ether (DME) and methyl tert-butyl ether (MTBE), which are safer alternatives to traditional gasoline.

What are the major regional markets of methanol, according to the EMR report?

What is the dominant application of methanol in the industry?

Formaldehyde is the dominant application in the industry.

The global methanol market is driven by the extensive use in the automotive industry as a transportation fuel and antifreeze agent for automobile radiators. Aided by the usage of methanol manufacturing of Dimethyl ether (DME) and Methyl tert-butyl ether (MTBE), which are safer alternatives to traditional gasoline, the market is expected to witness a further growth in the forecast period of 2023-2028, growing at a CAGR of 4.4%.

EMR’s meticulous research methodology delves deep into the market, covering the macro and micro aspects of the industry. Based on its application, the methanol industry can be segmented into formaldehyde, methanol to olefins (MTO), fuel applications, methyl tert-butyl ether (MTBE), acetic acid, methyl methacrylate (MMA), methylamines, with formaldehyde accounting for the largest market share. The major regional markets for methanol are North America, Europe, the Asia Pacific, Latin America, and the Middle East and Africa, with Asia Pacific accounting for the largest share of the market. The key players in the above market include Methanex Corporation, PROMAN, Zagros Petrochemical Company, Mitsubishi Gas Chemical Company, Inc., Celanese Corporation, Others.