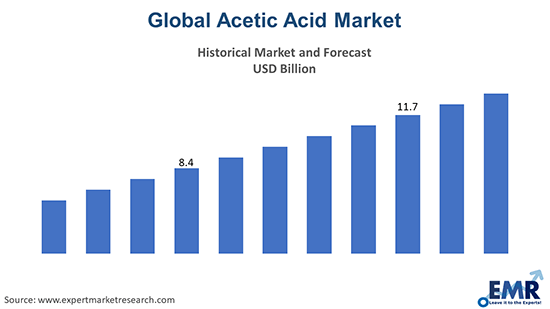 On the basis of application, the market has been segmented into vinyl acetate monomer (VAM), purified terephthalic acid (PTA), anhydride, ethyl acetate, and butyl acetate. Presently, vinyl acetate monomer (VAM- an intermediate in the production of a range of chemical derivatives) is one of the most rapidly growing application areas of acetic acid, accounting for the majority of its total global consumption. Vinyl acetate monomer is widely utilised in paint and coating formulations. In the paints industry, VAM is polymerised to obtain polyvinyl acetate or other polymers that serve as essential ingredients in the sector. In the industrial sector, acetic acid serves as an important chemical reagent, which contributes to its growing demand.

On a regional level, the market in the Asia Pacific region is expected to witness a significant growth during the forecast period. China currently represents the largest market for the product. The growing penetration of polymer manufacturers in the region has been contributing to the growth of the market. Furthermore, as acetic acid has applications across an array of industries including paints and coatings and chemicals, the rapid industrialisation and urbanisation observed in emerging countries like India and China are likely to favour the growth of the market. The region is witnessing increased government investments in the construction sector, along with the expansion of multiple manufacturing projects, which is expected to enhance the product demand across major domains in the forecast period.

Acetic acid (CH3COOH) is an organic chemical compound which gives a sour taste and pungent smell like vinegar. It occurs as both free and combined, in the form of esters of various alcohols in many plants and has also been detected in animal secretions. It is an important chemical reagent and industrial chemical used in the manufacturing of various other chemicals that serve a number of industries such as textiles, inks, rubbers, plastics, and others.

The market is segmented based on application into:

The major end use sectors of the product include: 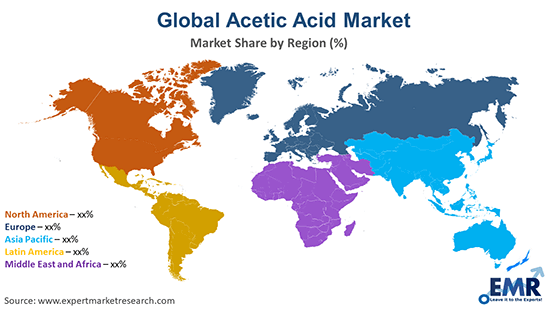 Vinyl acetate monomer, which is responsible for a majority of the consumption of acetic acid, is witnessing an increased demand in industrial and cosmetics manufacturing sectors. Thus, the rapid growth of the cosmetics sector is, in turn, contributing to the rising demand for acetic acid. Further, in its diluted form, acetic acid is often utilised in the household sector as a descaling agent, while it is widely used as a key ingredient (chemical reagent) to produce cellulose acetate in the industrial sector. Apart from this, acetic acid is also used as a condiment and acidity regulator in the food industry. As the chemical acts as a hydrophilic substance in its liquid form, it is suitable for a wide array of applications. These factors are significantly contributing to the growth of the market. In the forecast period, the use of new technology by the leading market players like Celanese Corporation to enhance their production capacity and formulate new product lines to enhance the consumer base is expected to aid the market growth over the forecast period.

The report gives a detailed analysis of the following key players in the global acetic acid market, covering their competitive landscape, capacity, and latest developments like mergers, acquisitions, and investments, expansions of capacity, and plant turnarounds:

The comprehensive EMR report provides an in-depth assessment of the market based on the Porter's five forces model and SWOT analysis.

What was the global acetic acid market size in 2022?

The market is expected to expand in the forecast period to reach USD 13.83 billion by 2028.

The major drivers of the market such as rising disposable incomes, increasing population, rising demand for end-use products, and government initiatives in the industry are expected to aid the industry growth.

What are the key trends in the acetic acid market?

The rising acceptance of bio-based acetic acid is likely to be a key trend over the coming years.

What are the major regions of acetic acid according to the market report?

North America, Europe, Asia Pacific, Latin America, the Middle East and Africa are the major regions in the market, and Asia Pacific is witnessing the fastest growth due to the rising demand from China.

Vinyl acetate monomer (VAM) account for the largest consumption of the product and is expected to witness rapid growth in the forecast period.

The major players in the market are British Petroleum, Celanese, Jiangsu Sopo, and others.

The global acetic acid market attained a value of USD 10.09 billion in 2022 driven by the growing demand from the application sectors and the rise of the construction industry. It is expected to witness a further growth in the forecast period of 2023-2028, growing at a CAGR of 5.4%. The industry is projected to be driven by the rise in the acceptance of bio-based acetic acid and is expected to reach USD 13.83 billion by 2028.

EMR’s meticulous research methodology delves deep into the market, covering the macro and micro aspects of the industry. On the basis of application, the vinyl acetate monomer (VAM) sector accounts for the largest share in the market. Based on the end-use sectors, the industry is divided plastics and polymers, food and beverages, inks, paints, and coatings, chemicals, and pharmaceuticals, among others. The major regional markets for the product are China, North America, Western/Eastern Europe, North East Asia, South East Asia, and Middle East and Africa. The key players in the above industry include British Petroleum, Celanese, Jiangsu Sopo, and others.