During the forecast period of 2021-2026, the Asia Pacific market is likely to experience relatively rapid revenue growth, as several developing countries, such as India and China, account for a significant production and consumption of milk.

Plastic is a significant segment of the milk packaging market in terms of material. It will also be the most optimistically growing material segment of the market in the next few years. Paperboards are also expected to grow significantly in the near future due to the increasing penetration of technological developments in the food and beverage packaging market worldwide.

In the Asia Pacific, different developing nations like India and China are the biggest milk producers and consumers in the region. Overall economic growth and heavy investment from key producers in the region would probably make the Asia Pacific a dominant player in the industry in the coming years. The prevalence of a dense population and the increase in innovations in the industry contribute to the growth factors for this area. North America and Europe are the other significant markets for the product after the Asia Pacific as their contribution to milk production and consumption is relatively lower than in the Asia Pacific.

People in the Asia Pacific region are typically tolerant of products that contain lactose, which creates new lactose-free avenues. Also, increasing concerns about child nutrition will complement dairy consumption and, thus, boost the market. In the region, the dairy trade is the primary source of income for many farmers, with the highest growth expected in the sector over the forecast period. There is a significant difference in supply and demand in countries such as India, despite being responsible for over 15% percent of global milk production. Even under these unfavourable conditions, the Indian government has decided to continue banning the imports of milk and milk products. It is supporting local farmers in large part in increasing their yield. The government also encourages foreign companies to develop domestic production. It is common in several other nations in the Asia Pacific, such as China. Thus, the focus on increasing milk production is expected to drive the growth of the milk packaging market in the region. 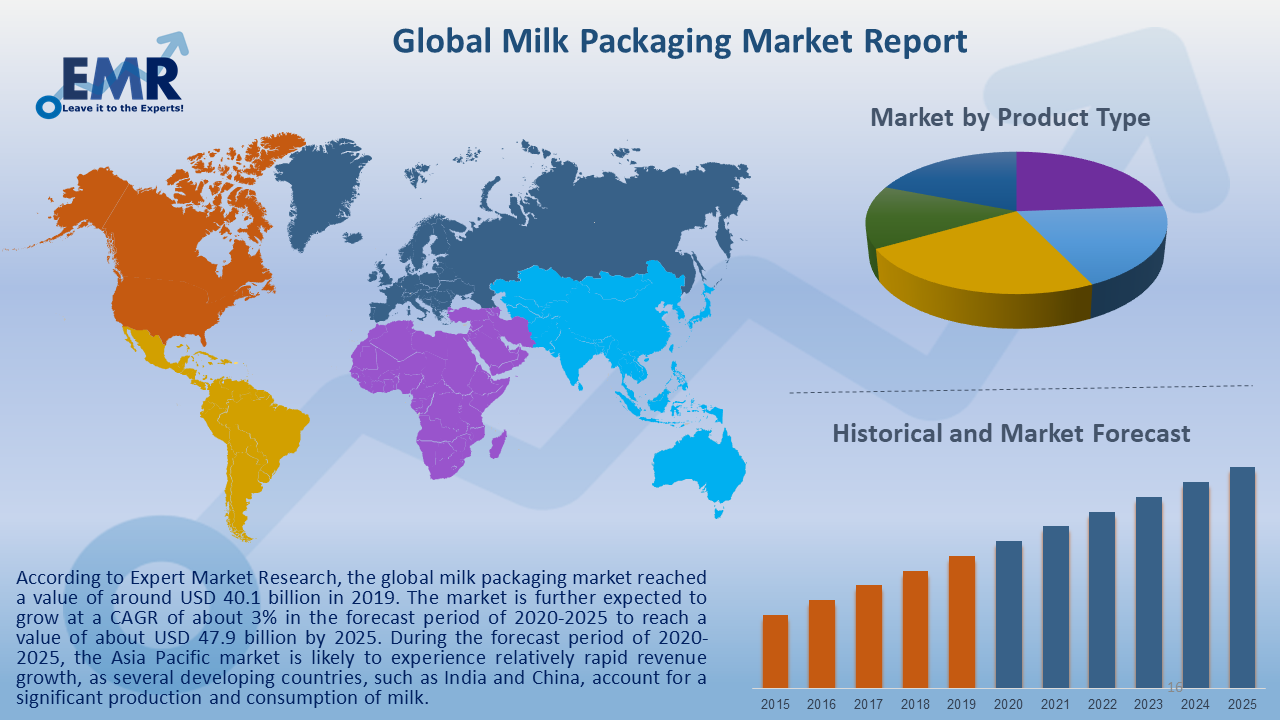 Packaging is a method used to secure, transport, identify and permit product merchandising using containers and components, and should be made from materials that are most suitable for this purpose. In addition to enabling safe and hygienic product packaging, a company can distinguish its products from those of its competitors.

On the basis of type, the milk packaging market is divided into:

Based on material, the market is segmented into:

The regional markets for milk packaging include North America, Europe, the Asia Pacific, Latin America, and the Middle East and Africa.

Factors like the growing number of small households through which consumers prefer to serve single packages of consumer products are driving the development of the global milk packaging market, especially for milk and other milk products. In addition, the demand for milk as a source of calcium, minerals, vitamin D, and protein in different countries by a growing number of health-conscious consumers is adding to the growth of the industry. The availability of various flavoured milk products in the market is another factor that is expected to fuel the global industry growth over the forecast period. Therefore, a growing population and disposable per capita income are expected to lead to future profits of packaged dairy products. Besides, different milk applications in the preparation of food products are projected to drive the growth of the milk packaging market in the coming years.

The report gives a detailed analysis of the following key players in the global milk packaging market, covering their competitive landscape, capacity, and latest developments like mergers, acquisitions, and investments, expansions of capacity, and plant turnarounds:

What was the global milk packaging market size in 2020?

In 2020, the global milk packaging market attained a value of nearly USD 40.1 billion.

The major drivers of the market such as rising disposable incomes, increasing population, increasing health consciousness, growing demand for single serve packs of milk, and the rising consumption of milk and flavoured milk are expected to drive the market growth.

What are the key industry trends of the global milk packaging market?

The shift towards environmentally friendly packaging is a major trend guiding the growth of the industry.

What are the major regions of milk packaging according to the market report?

The leading region in the industry are North America, Europe, the Asia Pacific, Latin America, and the Middle East and Africa, with the Asia Pacific accounting for the largest market share.

What are the leading types of milk packaging in the industry?

The significant types of the product in the industry are cans, bottles, pouches, and cups, among others.

What are the significant material types in the industry?

The global milk packaging market attained a value of USD 40.1 billion in 2020 driven by the rising consumption of milk and the growing demand for single serve milk packs. Aided by the rising consumption of flavoured milk, the milk packaging market is expected to witness a further growth in the forecast period of 2021-2026, growing at a CAGR of 3%. The market is projected to reach USD 47.9 billion by 2026.

EMR’s meticulous research methodology delves deep into the market, covering the macro and micro aspects of the industry. Based on its types, the milk packaging market can be segmented into cans, bottles, pouches, and cups, among others. On the basis of material, the industry can be divided into glass, plastic, metal, and paperboard. The major regional markets in the industry are North America, Europe, the Asia Pacific, Latin America, and the Middle East and Africa, with the Asia Pacific accounting for the most significant market share. The key players in the above industry include Amcor plc, Industrial Development Company s.a.l., Stanpac Inc., Graham Packaging Company Inc, and Crown Holdings, among others.

The United States paper cups and paper plates market size reached a value of almost USD 22 billion in the year 2020. The market is further expected to grow at a CAGR of 0.7% between 2021 and 2026 to r...
Read More