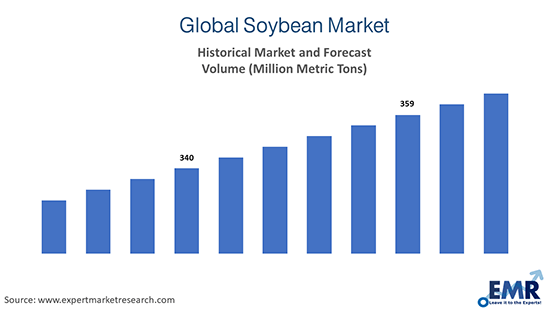 The major consuming regions include China, accounting for over 30% of the total consumption. It is followed by the United States, Argentina, Brazil, and the European Union. The most dominant end-use sector is the crushing industry, which results in the production of soy meal and soy oil. Soy oil is widely being used in the food, oleochemicals, and biodiesel industry, whereas soy meal has its uses in animal feed. China imports more than 60% of its soybean to meet its regional demand, especially in the crushing industry. China is planning to reduce its imports by shifting from corn production to soybean production and providing subsidies to the farmers who are doing that transition from corn to soybean production. Other importing regions are the European Union, Mexico, Egypt, and Argentina.

Soybean is also known as soya beans. It is an annual legume and an edible seed of the pea family (Fabaceae). Its scientific name is Glycine max. Soybeans are the most economically important bean in the world, supplying plant protein for millions of people plus ingredients for a lot of chemical products. They contain significant quantities of phytic acid, B vitamins, and dietary minerals. Soy vegetable oil, widely used in food as well as industrial applications, is a significant soybean processing product. It is the most important source of protein for livestock feed, which, in return, provides animal protein for human consumption. 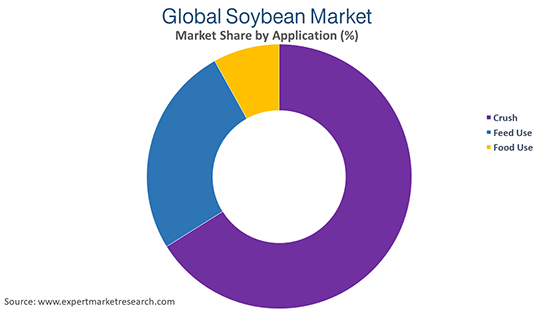 Soybean has wide applications in the following segments: 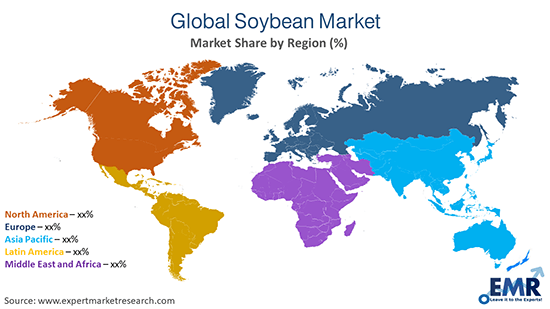 Soybean is widely used in the food industry as condiments in salads and for other cooking purposes. Soybean is also popular as a healthy alternative to cholesterol and fat-rich food. It is the ideal dairy alternative for people who are lactose intolerant. Moreover, it gives numerous health benefits with a high nutrient content of fibres, protein, antioxidants, phytoestrogens, omega-3 fatty acids, among others. The increasing cases of diseases like obesity have led to a shift to soybean-based snack and food products like soy chocolate nuts and soy crisps, driving the soybean market further. It is also helpful for people suffering from anaemia as it is a rich source of iron and copper, helping in the formation of red blood cells. Thus, the rising health consciousness and rising demand for dairy alternatives are driving the growth of the global soybean market.

Other driving factors for the soybean market are the growing markets for adhesives, insecticides, candles, printing inks, waxes, plastics, etc. The demand for these products is growing rapidly with the rising construction and automobiles industries across major markets. The rising middle-class population and growing urbanisation are also propelling the growth of the soybean market.

The comprehensive report covers the macro and micro aspects of the industry. The EMR report provides an in-depth assessment of the industry based on Porter’s five forces model, along with giving a SWOT analysis. This report also provides the regional historical (2018-2022) and forecast (2023-2028) price analysis for the product. It also assesses the global trade data, covering the volume and value of leading importing and exporting countries. Key demand and price indicators have also been provided within the report. The report also provides a cost and value chain analysis of the market.

What was the global soybean market size in 2021?

The global soybean market attained a volume of 367 million metric tons in 2021.

The market is estimated to witness a healthy growth in the forecast period of 2023-2028 to reach a volume of 396 million metric tons by 2027.

What are the key industry trends of the global soybean market?

The growing demand from the crushing industry and the wide applications of the product in the food and feed industries are the key industry trends propelling the market growth.

What are the major regional markets of soybean, according to the EMR report?

The major applications of the product are crush, feed use, and food use.

The major players in the industry are Olam International, Fuji Oil Co., Ltd., CHS Inc., Cargill, Incorporated, and The Scoular Company, among others.

The global soybean market attained a volume of nearly 367 million metric tons in 2021, driven by the growing demand from the crushing industry. Aided by rising health consciousness and rising demand for dairy alternatives, the market is expected to witness further growth in the forecast period of 2023-2028, growing at a CAGR of 1.3%, to reach a volume of 396 million metric tons by 2027.

EMR's meticulous research methodology delves deep into the market, covering the macro and micro aspects of the industry. The major applications of the product are crush, feed use, and food use. The major regional markets for soybean are North America, Europe, the Asia Pacific, Latin America, the Middle East and Africa. The major players in the industry are Olam International, Fuji Oil Co., Ltd., CHS Inc., Cargill, Incorporated, and The Scoular Company, among others.