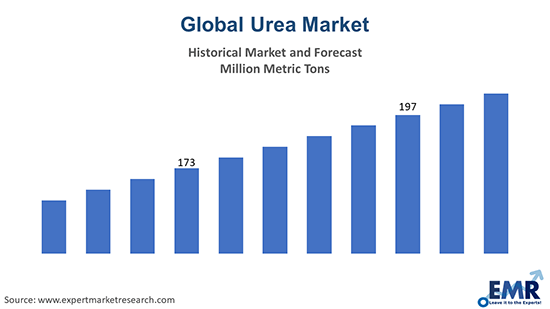 By 2026, the global demand is projected to attain 211.5 million metric tons. The most dominant application sector is the fertilizer segment, accounting for over 80% of the global consumption of urea.

The Asia Pacific is the major supply market, accounting for almost 60% of the global urea market share. The demand rate in the region is expected to stand at a CAGR of 2.2% in the forecast period. The healthy growth in the region owes to the growing demand from India and Thailand for traditional fertilisers. Within the Asia Pacific region, China is the largest producer as well as consumer of urea. India follows China as the second-largest consumer market. China is also the net exporter of urea, exporting majorly to India and North America. Although most of the exporters are from gas-rich countries, China is a significant exporter due to its rich coal supply, which is a feedstock of the product. Unlike China, which is a self-sufficient urea market, India imports the product in order to meet the regional demand. India is among the top importers of urea globally, accounting for over 15% of the total imports. Other than China, Indonesia, and Pakistan export the product to meet the domestic demand within the region. The other major importing countries in the region include South Korea and Thailand.

North America, another significant urea market, is expected to expand its capacity, which would reduce the region’s reliance on imports. There are multiple projects proposed in order to expand the capacity and, thus, the supply in the region. The demand for the product in North America is higher than the global market growth rate. The growing demand can also be attributed to the increasing economy in the region.

Urea also referred to as carbamide, is a carbonic acid diamide with the formula H2NCONH2. It has important applications as a feed supplement and fertilizers. It is also used as a starting product for the production of medications and plastics. It is a transparent and crystalline material that melts at a temperature of 132.7 ° C (271 ° F) and decays before boiling. It has wide applications in the following segments: 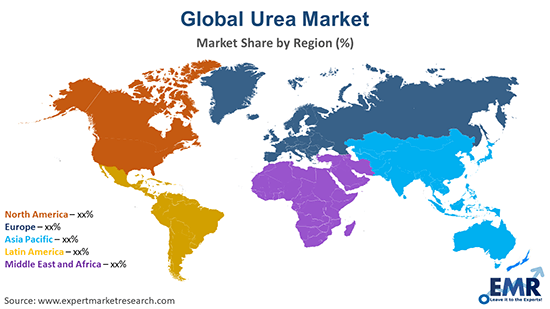 The growing agriculture sector is driving the global urea market growth. Urea and its derivatives are widely used as fertilisers in most of the markets, including North America, Brazil, and India. The growing demand for N-fertilisers is providing a push to the growing demand for the product in the market. Thus, the rising fertilizer market, as well as nitrogen application, is driving the urea market growth further.

China has abundant sources of coal, an important feedstock for urea production, and the Chinese coal prices support the growth of urea production in the region. The developing countries, like the South Asian and Latin American countries, are likely to have an increased demand for the product as compared to other regions due to the increasing consumption of the product in these countries. Urea also acts as a vital feedstock in the production of adhesives, resins, plastics, etc. Thus, the growth of the markets of these products significantly supports the growth of the urea market. The product is also being increasingly used in automobiles due to the changing regulations regarding the use of nitrogen oxide in diesel engines, which is propelling the urea market further. The product is also used abundantly to produce urea-formaldehyde resins, melamine, diesel exhaust fluids, and livestock feed, and their growing demand is supporting the growth of the industry.

The report gives a detailed analysis of the following key players in the global urea market, covering their competitive landscape, capacity, and latest developments like mergers, acquisitions, and investments, expansions of capacity, and plant turnarounds:

The comprehensive EMR report provides an in-depth assessment of the industry based on Porter’s five forces model, along with giving a SWOT analysis. The report also provides the price analysis and trade data for the market.

What was the global urea market size in 2020?

In 2020, the global urea market attained a volume of nearly 187.8 million metric tons.

What are the key industry trends of the global urea market?

The increased demand for the product in the agricultural sector to produce fertilisers is expected to be a key trend guiding the growth of the industry.

What are the major regional markets of urea, according to the EMR report?

What are the different applications of urea?

The global urea market attained a volume of 187.8 million metric tons in 2020, driven by the expanding agriculture sector, increased demand for fertilisers, rising population, rising disposable incomes, availability of feedstock for urea production and low prices. Aided by the increased demand for the product in the agricultural sector to produce fertilisers, the market is expected to witness a further growth in the forecast period of 2022-2027, growing at a CAGR of 2%. The market is projected to reach 211.5 million metric tons by 2026.

The global biorationals market attained a value of USD 2 billion in 2021, driven by the increased adoption of integrated pest management. Aided by the developing farming technology and practices, and ...
Read More

The global agricultural adjuvants market was driven by the increasing demand for food in the historical period. Aided by advanced farming equipment and a rising global population, the market is expect...
Read More

The global agricultural inoculants market was driven by the increasing demand for organically grown crops in the historical period. Aided by the rising demand for food and grng world population, the m...
Read More

The global agricultural microbials market was driven by the growing demand for microbial-based solutions in the historical period. Aided by the growth and expansion of the agricultural industry and ri...
Read More

The global agricultural micronutrients market was driven by the increase in growers’ awareness of plant nutrition in the historical period. Aided by the rise in demand for higher crop yields and dev...
Read More