Self-service ATM machines have witnessed a robust growth in recent years, which is propelling the growth of the ATM services industry. It is considered a breakthrough technology which integrates multiple features into one machine, serving as an one-stop solution for various functions, such as, cash deposit, cash recycling, withdrawal, check deposit, internet banking, coin dispense, banking products and solutions such as loans and credit cards, and the opening and changing of bank accounts. This technology is widely adopted in the European and American markets, and in Asian countries such as China, India, Korea, Japan, and Singapore.

The Asia Pacific is a rapidly growing market within the industry, with China and India as the leading countries in terms of the number of deployments. The Asia Pacific ATM services market held a significant share in the ATM market in 2017. Major parts of Asia, Africa and South America have low maturity within the industry and, thus, have a high potential for growth. Developed economies like the United States and Europe are the mature markets for ATM and ATM services. 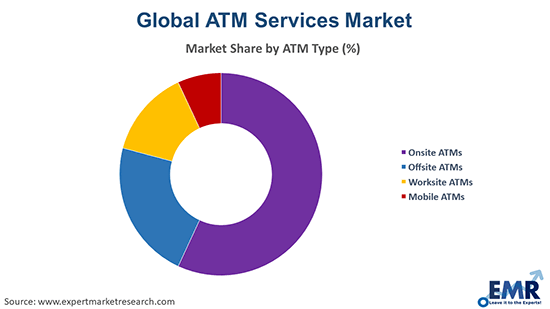 ATM service providers provide the hardware for ATM machines and are also responsible for the servicing of the machines. They are also involved in making the process more cost efficient while ensuring the optimum increase in revenue and traffic from the ATM. Based on types, the industry can be segmented into:

On the basis of application, the industry can be divided into:

The Asia Pacific region is predicted to be the fastest-growing market up till 2021, with an annual growth rate of 10.6%. In the emerging economies, such as China, India, and Brazil, the technology adoption is visibly increasing with the rapid growth of ATMs deployment; hence, the adoption rate of outsourced ATM services is likewise high. The adoption of outsourced ATM services is majorly driving the industry, owing to the growing awareness of the potential cost-savings capability among the buyers. The industry is known by the spate of mergers and acquisitions, with suppliers seeking ways to maximise their service capability to cater to the requirements of the large buyers.

The banks are in competition to provide services as per customers' convenience, further enhancing the market growth. In emerging economies, such as China, India, and Brazil, the bankable population has been increasing; thus, there has been a considerable surge in the opening of new bank accounts. In the last three years, more than 200 million new bank accounts have been opened in India itself. These developments are propelling the growth of the ATM services market.

It is essential for banks to have a significant presence in the city, in the form of branches, to draw customers. This is not feasible, nor cost-efficient to establish branches all over the city. This is where the role of ATMs comes in, as they do not require such heavy real estates, nor do they require any other related costs, thus, invigorating the market growth for the ATM industry. The deployment of low-cost ATMs and more economical IP-based communication, which is pushing down the initial investment costs, are providing further impetus to the growth of the ATM services industry. There has been a proliferation of off-site ATMs. Due to the conveniently located ATMs delivering consumers' needs, the market growth has been propelled forward.

However, if Brexit happens in the forecast period, the inflow of skilled manpower from other European countries such as the Czech Republic and Poland to the United Kingdom might decline. This will result in increased labour shortages and higher training costs, presenting a constraint to the ATM industry growth.

The report gives a detailed analysis of the following key players in the global ATM services market, covering their competitive landscape, capacity, and latest developments like mergers, acquisitions, and investments, expansions of capacity, and plant turnarounds:

The comprehensive EMR report provides an in-depth assessment of the industry based on Porter's five forces model along with giving a SWOT analysis.

EMR’s meticulous research methodology delves deep into the market, covering the macro and micro aspects of the industry. Based on types, the global ATM services market can be segmented into onsite ATMs, offsite ATMs, worksite ATMs, and mobile ATMs. By applications, the industry can be segmented into withdrawals, transfers, and deposits, among others. The major regional markets are North America, the Asia Pacific, Europe, Latin America, and the Middle East and Africa, with the Asia Pacific expected to witness a rapid growth in the coming years. The key players in the above industry include NCR Corporation, Cardtronics, Inc., Euronet Worldwide, Diebold Nixdorf, Incorporated, and Payment Alliance International, among others.

The major drivers of the industry such as rising disposable incomes, increasing adoption of ATMs, growing awareness of the cost saving benefits of the industry, and the rising number of bank accounts in the emerging economies are driving the growth of the market globally. EMR’s research methodology uses a combination of cutting-edge analytical tools and the expertise of their highly accomplished team, thus, providing their customers with industry insights that are accurate, actionable, and help them remain ahead of their competition.

The global virtual payment (POS) terminals market attained a value of USD 9.2 billion in 2020. The industry is further expected to grow in the forecast period of 2021-2026 at a CAGR of 30% to reach US...
Read More

The growth in the global market is driven by the increasing ATM installations, strict banking regulations, and increasing crime rates. The primary buyers of cash in transit services constitute banks, ...
Read More