Global Caprylic/Capric Triglycerides Market to Grow at a CAGR of 4% During 2021-2026, Owing to the Rising Demand for Cosmetics

The global caprylic/capric triglycerides market is expected to grow at a CAGR of 4% in the forecast period of 2023-2028 to reach a value of USD 840 million by 2026. 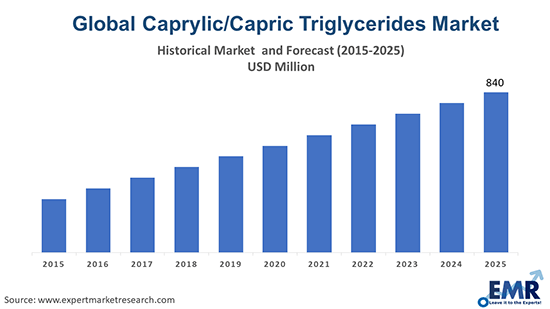 The market for caprylic/capric triglycerides is being driven by the rising demand for cosmetics. The product is used in the cosmetic products as an absorbent which smoothens the skin and leaves a dry finish upon oiling of the skin. It is in high demand for products like cream, moisturizer, lotion, serum, cleanser and face wash, among others, as it does not get sticky and heavy on the skin. The product is also used in the medical field as it provides an energy source for patients ailing from fat malabsorption syndrome. Caprylic/capric triglycerides are pure and have unique attributes that still find applications in medical and nutritional products.

Region-wise, the Asia Pacific and the Middle East and Africa markets for caprylic/capric triglycerides are growing significantly. Within the Asia Pacific region, India and China have witnessed considerable growth over the past years. Due to the dynamic nature of the market in these developing economies as a result of rapid urbanisation, increasing disposable incomes, and changing lifestyles, the market is expected to grow rapidly in the forecast period. Additionally, India is considered to become the next home of several international producers of the product owing to the accelerating cosmetics market in the country in the forecast period. The cosmetics market in Indian is also influenced by the rising trend of influencers on the digital platform that promotes and market various cosmetic brands, along with the increasing number of young consumers within the country. 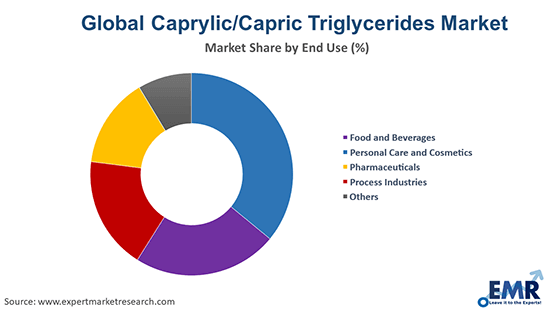 Caprylic/capric triglycerides, variously known as MCT oil or medium-chain triglycerides is formulated by the reaction of coconut oil with glycerol through the esterification method. It is used extensively in cosmetics, beauty, and personal use industries as it offers oxidative stability and smooth texture.

On the basis of function, the market is divided into: 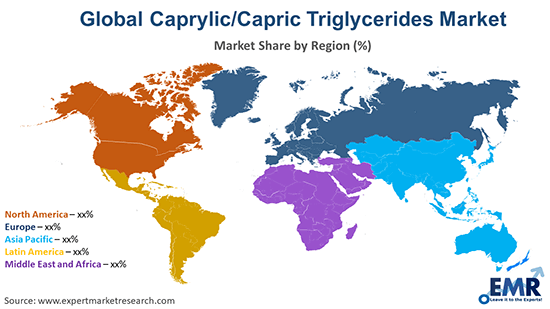 The market for caprylic/capric triglycerides is driven by the growing demand for personal care products like creams, moisturizers, and soaps across the world. It is in huge demand due to its smooth texture, oxidizing effect, and low cost. The market is expected to witness further growth prospects in countries, such as India, China, and Egypt. Regions such as the Middle East and the Asia Pacific are witnessing robust growth as a result of changing perception towards cosmetics and fashion. Factors such as increased per capita income and changing lifestyles are also influencing the market positively. The caprylic/capric triglycerides industry is predicted to grow during the forecast period owing to its versatile benefits.

The report gives a detailed analysis of the following key players in the global caprylic/capric triglycerides market, covering their competitive landscape, capacity, and latest developments like mergers, acquisitions, and investments, expansions of capacity, and plant turnarounds:

What is the growth rate of the global caprylic/capric triglycerides market?

The major drivers of the industry, such as rising disposable incomes, growing demand for cosmetics, rising per capita incomes of younger consumers, rapid urbanisation, and growing trend of social media influencers, are expected to aid the market growth.

What are the key industry trends of the global caprylic/capric triglycerides market?

The key trend guiding the growth of the market includes rising demand from emerging markets like India, China, and Egypt due to changing perceptions towards cosmetics and fashion.

What are the major regional markets of caprylic/capric triglycerides, according to the EMR report?

What are the leading functions of caprylic/capric triglycerides in the market?

The leading functions of caprylic/capric triglycerides in the market are dispersing agents, solubilizers, solvents, and spreading agents, among others.

What are the major end-use sectors in the industry?

The major end-use sectors in the industry are food and beverages, personal care and cosmetics, pharmaceuticals, and process industries, among others.

EMR's meticulous research methodology delves deep into the market, covering the macro and micro aspects of the industry. Based on function, the market is segmented into dispersing agents, solubilizers, solvents, and spreading agents, among others. By end-use, the industry Is divided into food and beverages, personal care and cosmetics, pharmaceuticals, and process industries, among others. The major regional markets for caprylic/capric triglycerides are North America, Europe, the Asia Pacific, Latin America, and the Middle East and Africa. The key players in the above market include Berg + Schmidt GmbH & Co. KG, Croda International plc, IOI Oleo GmbH, Oleon NV, and Ecogreen Oleochemicals Inc., among others.