The global ethanolamine market demand reached a volume of around 1.9 million metric tons in 2019. The demand is expected to witness a further growth in the coming years and is expected to grow at a CAGR of 3.75% between 2020 and 2025 to reach 2.3 million metric tons by 2025. Due to increased demand from end-use industries such as textiles, chemicals, cosmetics and personal care, pharmaceutical, and others, the ethanolamine market is gaining momentum. Increasing demand for surfactants and other chemicals to meet global demand is fuelling the market growth further. The low cost of production is also aiding the growth of the ethanolamine market. 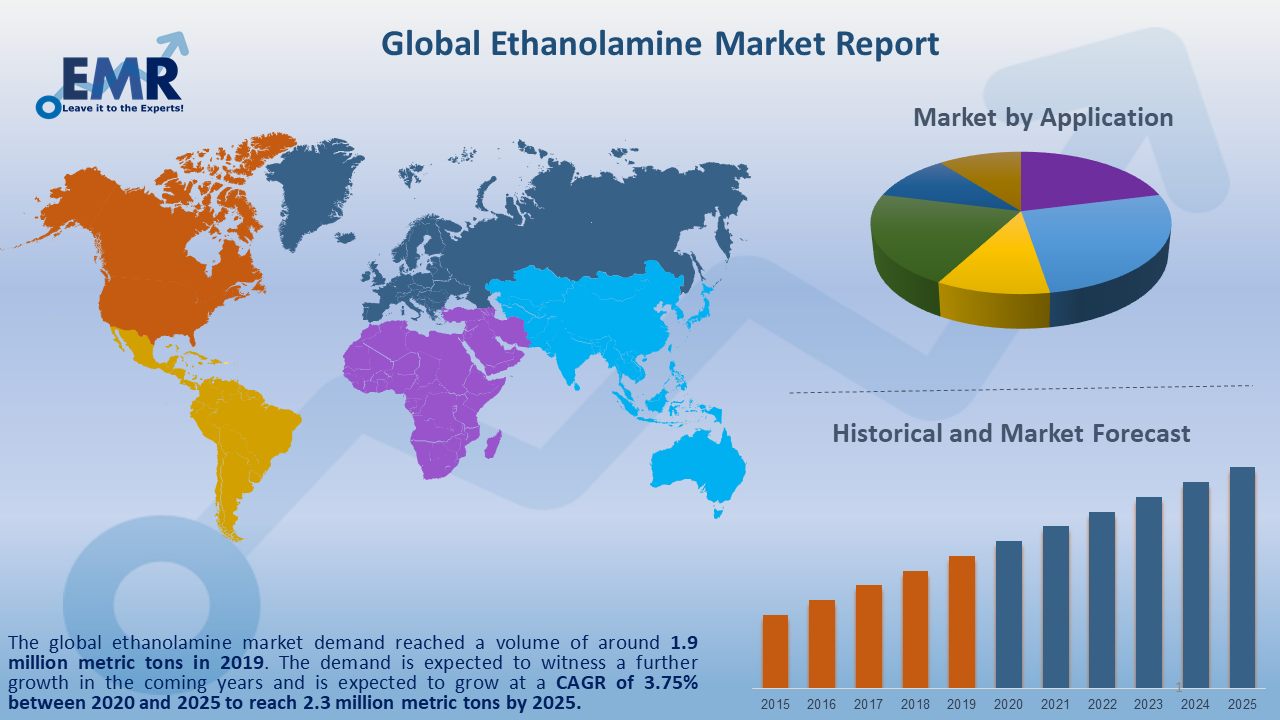 The Asia Pacific follows North America as the second-largest market for ethanolamine. The region, however, minimally exports ethanolamine to other regions due to an increase in the local consumption of the product to satisfy the rising demand. In the coming years, the Asia Pacific will be one of the major demand driving regions for the product due to high growth rates being witnessed in the region’s herbicides and home and personal care industries. The rising food consumption in countries like China and India, along with the penetration rate of home and personal care products will be the key demand drivers for ethanolamine in the Asia Pacific region. The regional growth of the market is also being driven by the lack of alternatives for ethanolamine in products like detergent, personal care, and herbicides.

Ethanolamine is a viscous liquid with an odour of ammonia, which is used to remove carbon dioxide and hydrogen sulphide from natural gas and is used in the manufacture of antibiotics. It is commonly used in the cosmetics, medical, clothing, automotive, and chemical industries. It finds its applications in the production of the following segments:

The detergents and personal care sector is followed by pesticides as the other major application sector for the product. The global ethanolamine market is being driven by the pesticides (glyphosate) industry. Glyphosate, which uses ethanolamine as its raw material, is expected to be the major demand driver for ethanolamine because of the increase in the crop production in the Asia Pacific and North America. An increase in glyphosate consumption across the globe will, thus, lead to the growth of the ethanolamine market in the future.

The report gives a detailed analysis of the following key players in the global ethanolamine market, covering their competitive landscape, capacity, and latest developments like mergers, acquisitions, and investments, expansions of capacity, and plant turnarounds:

EMR’s meticulous research methodology delves deep into the industry, covering the macro and micro aspects of the industry. Based on application, the global ethanolamine market can be segmented into detergents and personal care, pesticides, gas purification, cement, and wood preservation, among others, with detergents and personal care leading the application sector, accounting for 36% of the total global demand of the product. North America, Latin America, Europe, the Middle East and Africa, Europe, and the Asia Pacific are the major regions for the ethanolamine market, with North America leading the overall global ethanolamine market. The key players in the above industry are BASF SE, Dow Chemical Company, INEOS Capital Limited, Huntsman International LLC, Nouryon, Saudi Kayan Petrochemical Co., and Nippon Shokubai Co., Ltd, among others.

The major drivers of the industry such as rising disposable incomes, increasing population, rising urbanisation, growing detergents and personal care sector, rising construction industry, and growing demand for herbicides due to rising crop output in the Asia Pacific and North America are driving the growth of the ethanolamine market globally. EMR’s research methodology uses a combination of cutting-edge analytical tools and the expertise of their highly accomplished team, thus, providing their customers with industry insights that are accurate, actionable, and help them remain ahead of their competition.

The demand for methyl isobutyl ketone is being driven by the growing paints and coating sector and the automobile industry, especially in countries like Brazil, Eastern Europe, and some Asian countrie...
Read More