Fuel cells can be used as stationary power units for primary power, backup power, or combined heat and power (CHP). Based on application, the stationary segment occupies a significant share in the industry. The increasing demand for stationary fuel cells can be attributed to their ability to power anything from a laptop to a single family home or even larger needs (200 kW and above), thus, becoming a versatile option for a wide range of markets like retail, residential, telecommunications, and others. This has significantly contributed to the growth of the fuel cell industry. Meanwhile, the transportation segment is expected to witness a significant growth in the forecast period owing to the increasing adoption of fuel cell powered forklifts and favourable government initiatives, particularly in developed economies.

Geographically, North America and Europe account for a significant share in the industry owing to the stringent environmental regulations and increased government investments to encourage the adoption of renewable energy sources across the regions. The United States is one of the largest global manufacturers of fuel cells and a leading global exporter. Meanwhile, the Asia Pacific is expected to witness a robust growth in the forecast period due to the increasing focus on reducing the economic dependence on fossil fuels, advances in fuel cell technology, and growing shift from the grid to clean, onsite power production.

Fuel cells are the cells that generate electricity through a mechanism that does not involve combustion. These cells transform the chemical energy in a hydrogen-rich fuel to electricity through an electrolytic process. This means fuel cells produce relatively fewer pollutants compared to the conventional, combustion-based power generation technologies. Further, they are fuel flexible, highly efficient, and operate at very low noise levels. Thus, they serve as an efficient alternative to traditional power generation technologies, offering improved reliability and environmental benefits. 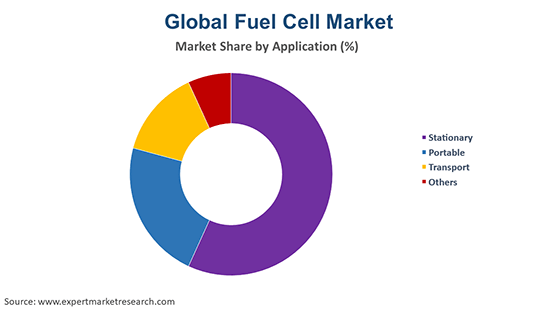 On the basis of end use, the industry can be categorised into: 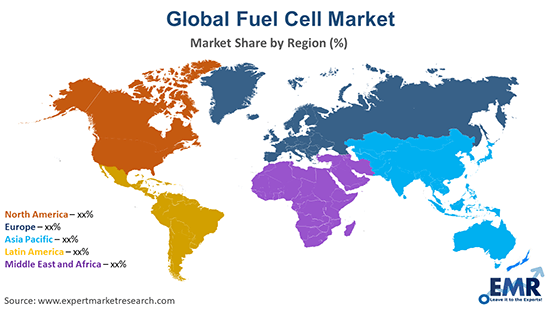 The global fuel cell industry is being driven by the increasing demand for clean energy sources across the globe. The rising environmental concern and the increasing global demand for energy are supporting the growth of the industry. Additionally, favourable government initiatives and advancements in fuel cell technologies, such as PEMFC, PAFC, and others, have further boosted the growth of the industry. Over the forecast period, the growing adoption of fuel cell-based vehicles and the thriving power sector are expected to significantly contribute to the industry growth.

The report gives a detailed analysis of the following key players in the global fuel cell market, covering their competitive landscape, capacity, and latest developments like mergers, acquisitions, and investments, expansions of capacity, and plant turnarounds:

What was the global fuel cell market size in 2020?

The global fuel cell market, driven by the stationary fuel cell shipments which attained a volume of nearly 283 megawatts.

The stationary fuel cell shipments market is projected to grow at a CAGR of 9% between 2021 and 2026, likely to aid the fuel cell market.

What are the key industry trends of the global fuel cell market?

The key trends in the market are increasing demand for clean energy sources across the globe, favourable government initiatives and advancements in fuel cell technologies.

What are the major regional markets of fuel cell, according to the EMR report?

What are the different types of fuel cells in the market?

What is the dominant application of fuel cell in the industry?

Stationary is the dominant type in the industry.

What are the end-use sectors for the industry?

The end-use sectors include fuel cell vehicles, utilities, and defence, among others.