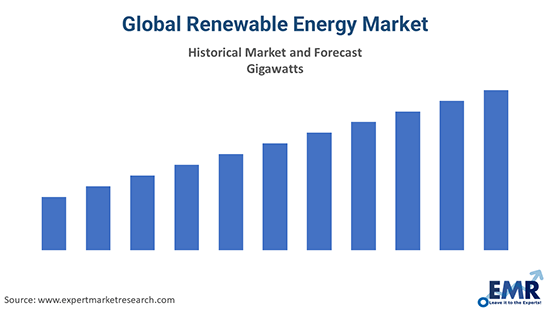 With the growing awareness about environmental issues, more and more nations are investing in renewable energy projects. The global investments made in such renewable resources was around USD 280 billion in 2017. Hydropower is the leading renewable energy technology in most of the regions. However, in the coming years, solar and wind energies are going to be the preferred alternative energy types. In 2018, many countries invested in renewable energy projects, with China investing the most substantial amount, having invested in the projects of nearly 696 gigawatts. China is followed by countries like the United States, Brazil, Germany, and India. China dominates the industry in three technologies, namely, wind, hydropower, and solar energy. Brazil, meanwhile, has the largest capacity installed for bioenergy, whereas the United States is the leading country in geothermal technology.

North America is one of the largest countries with installed renewable energy technologies. In the region, the United States aims to increase its contribution to the industry to 30% by 2026 as currently, the country’s electricity market is powered by fossil fuels. The growing economy of the country is also supporting the growth of the industry. Mexico and Canada are also witnessing a steady increase in the capacity of wind and solar energy technologies.

The Asia Pacific is the fastest-growing region for the industry. The region accounts for nearly 27% of the global industry share. China, one of the significant countries in the regional market, has the largest capacity for hydropower, wind, and solar energy plants. China and India, together, are the leading renewable energy markets in Asia, with nearly 75% installed capacity of the Asian market being within these regions. Japan follows India and China in terms of installed capacity. Hydropower is the leading resource in the region, with offshore wind and the solar area being the most exploited renewable resources in Asia. The capacity of this region is expected to witness a robust growth in the coming years.

Renewable energy is obtained from renewable sources, which are naturally replenishable like wind, biomass, solar, hydropower, etc. It provides energy to segments like electricity, transport, air and water cooling or heating, and other energy services. 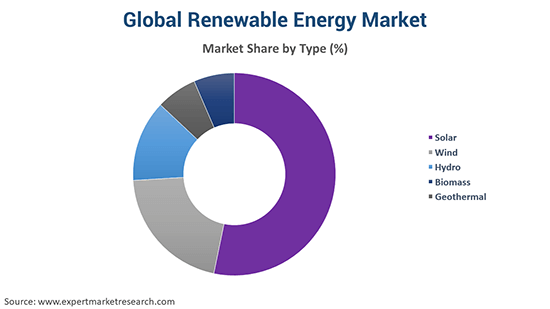 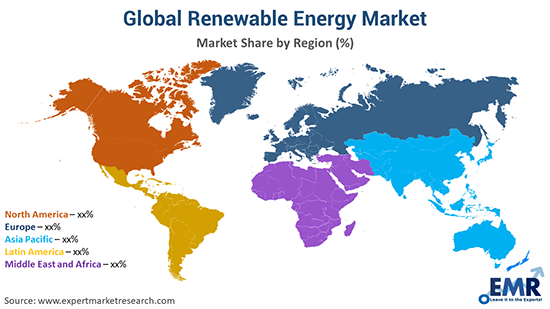 The global renewable market is being driven by the increasing awareness and climate changes caused by fossil fuels and conventional energy resources such as oil, coal, and natural gas. The pollution caused by the burning of fossil fuels is causing severe damage to the environment and, thus, resulting in rapid climate change and increasing the need for renewable alternatives. The rising demand witnessed by the industry is being aided by the growing focus on sustainable development since natural resources witnessing a rapid depletion. The increased support by governments globally in the form of tax relief and other benefits for the installation and use of such alternative energy sources, as well as the increasing awareness about green energy among the consumer, is propelling the industry growth further.

The rising economies and installation in emerging economies like India and China are providing further impetus for the industry growth. Governments across the globe are now increasingly investing more in renewable energy plants in order to save electricity and restrict environmental hazards. In the coming years, the industry is expected to be driven by the rising adoption and acceptance of alternative energy sources. The rising innovations within the industry are also expected to propel the industry growth in the forecast period. The increasing parity in the prices of alternative energy to conventional energy is further projected to drive the industry globally.

September 2020- Vestas (OTCMKTS: VWDRY) to scale down the production of the V136 blade in Europe and invest in other types of blades such as V117 and V150 due to shifting market demand.

The report gives a detailed analysis of the following key players in the global renewable energy market, covering their competitive landscape, capacity, and latest developments like mergers, acquisitions, and investments, expansions of capacity, and plant turnarounds:

What was the global renewable energy market size in 2020?

In 2020, the global renewable energy market reached an installation capacity of around 2455 gigawatts.

The major drivers of the market include the growing focus on sustainable development, increased support by governments, increasing awareness about clean energy, rapid economic growth, rising adoption of alternative energy sources across industries, rapid technological innovations, and increasing parity in the prices of alternative energy to conventional energy.

What are the key industry trends of the global renewable energy market?

The increasing environmental consciousness and the rising expenditure in the development of renewable energy plants are the key industry trends propelling the market growth.

What are the different renewable energy types considered within the market report?

On the basis of type, the industry can be divided into solar, wind, hydro, biomass, and geothermal.

The global renewable energy market attained a volume of nearly 2455 gigawatts in 2020, driven by the increasing environmental awareness. Aided by the growing focus on sustainable development and the rising investments in the development of renewable energy sources, the market is expected to witness a further growth in the forecast period of 2023-2028.