Global Hydrogen Bromide Market to Witness a Healthy Growth During 2021-2026, Aided by the Growing Bromine Market

The global hydrogen bromide market is being aided by the growing bromine market, which reached a value of USD 3.89 billion in 2020. The global bromine market is further expected to grow at a CAGR of 8% in the forecast period of 2023-2028 to reach a value of approximately USD 6.17 billion by 2026. 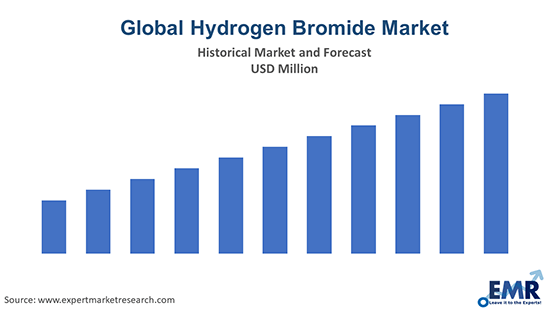 Hydrogen bromide (HBr) is used as a catalyst in the production of purified terephthalic acid (TPA), inorganic and organic bromine compounds, and bromides of zinc, sodium, and calcium. In 2017, hydrogen bromide (HBr) consumption for TPA accounted for nearly 6% of the global consumption of bromine-based compounds. The TPA produced is further utilised in the production of polyethylene terephthalate (PET), which is finally used for packaging application and in fibres. 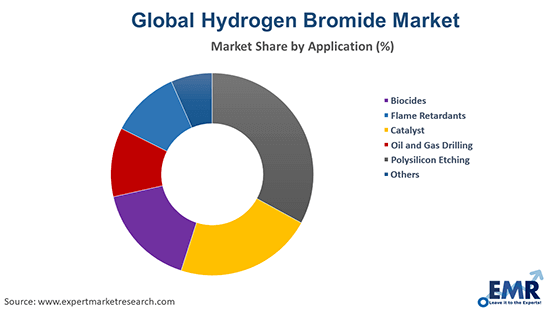 Hydrogen bromide is a colourless gas with the formula HBr. This diatomic molecular compound is composed of hydrogen and bromine atoms. It has an acrid odour and is very soluble in water. Industrially, hydrogen bromide is prepared by mixing hydrogen and bromine at temperatures ranging between 200 and 400 °C. The reaction takes place in the presence of a catalyst, namely, platinum or asbestos. However, this chemical can be synthesised by a variety of methods. It is an important reagent that is used in the preparation of several inorganic and organic bromine compounds.

On the basis of form, the market is bifurcated into:

Based on end use, the industry has been categorised into: 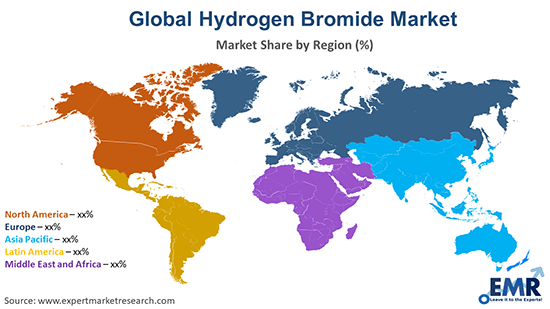 The growing utilisation of hydrogen bromide in flame retardants and etching process of polysilicon wafers are driving the growth of the industry. The brominated flame retardants are extensively used in insulation and fabrication of electronic components. The plasma etching process is used to manufacture chips for semiconductors, especially in the electronics industry. Thus, the thriving electronics sector is boosting the market growth.

The growth will be higher in the developing regions owing to the rising construction activities, escalating disposable incomes, and growing sales of electronics. China is expected to be the dominant market for bromine in the Asia Pacific region due to the increasing demand for brominated flame retardants.

The report gives a detailed analysis of the following key players in the global hydrogen bromide market, covering their competitive landscape, capacity, and latest developments like mergers, acquisitions, and investments, expansions of capacity, and plant turnarounds:

What was the global hydrogen bromide market size in 2020?

The global hydrogen bromide industry is being driven by the bromine market, which attained a value of nearly USD 3.89 billion in 2020.

The bromine market is projected to grow at a CAGR of 8% between 2021 and 2026; thus, further aiding the hydrogen bromide industry growth.

The bromine market is estimated to reach about USD 6.17 billion by 2026 and is expected to continue to drive the hydrogen bromide industry growth.

The major drivers of the industry, such as rising disposable incomes, increasing population, the growing use of hydrogen bromide in the etching process of poly-silicon wafers, rising demand for the product in the production of purified terephthalic acid (TPA), increasing construction activities, growing demand for electronics, and the rising use of the product in flame retardants, are expected to aid the market growth.

The key trend guiding the growth of the market includes the rising construction activities in emerging regions.

What are the major regional markets of hydrogen bromide, according to the EMR report?

What are the leading forms of hydrogen bromide in the industry?

The leading forms of hydrogen bromide in the industry are gas and liquid.

The significant application segments in the market are biocides, flame retardants, catalyst, oil and gas drilling, and polysilicon etching, among others.

What are the major end-use sectors in the industry?

The major end-use sectors in the industry are energy, automotive, electronics, pharmaceutical, construction, agriculture, and water treatment, among others.

The major players in the industry are Showa Denko K.K., Albemarle Corporation, Air Liquide USA LLC, and Verni Group, among others.

The global hydrogen bromide market is being driven by the rising production of purified terephthalic acid (TPA). The hydrogen bromide industry is being aided by the bromine market growth, which attained a value of USD 3.89 billion in 2020. In the forecast period of 2023-2028, the bromine industry is expected to grow at a CAGR of 8% to reach a value of nearly USD 6.17 billion by 2026.

EMR’s meticulous research methodology delves deep into the market, covering the macro and micro aspects of the industry. Based on form, the market is segmented into gas and liquid. On the basis of application, the industry is divided into biocides, flame retardants, catalyst, oil and gas drilling, and polysilicon etching, among others. By end use, the industry is categorised into energy, automotive, electronics, pharmaceutical, construction, agriculture, and water treatment, among others. The major regional markets for hydrogen bromide are North America, Europe, the Asia Pacific, Latin America, and the Middle East and Africa. The key players in the above market include Showa Denko K.K., Albemarle Corporation, Air Liquide USA LLC, and Verni Group, among others.