The exotic vegetables industry in India is being aided by the growing demand for exotic produce, which is growing by 15% to 20% per annum. The country is the second-largest producer of fruits and vegetables, followed by China and is also a significant consumer market for the same. Vegetables account for over half of the total market share of the Indian fruits and vegetable market. Although the industry is highly fragmented and unorganised, the agricultural farms are leveraging the growing demand for the exotic vegetables in the food services sector by coming up with the produce grown, especially for premium eateries in Goa, Pune, Gurgaon, and Mumbai, among other reasons. India exports nearly 5,000 million tons of fruits and vegetables produce to Italy per year. The country mainly exports onions and green peas to the countries of the Middle East, such as the United Arab Emirates, Saudi, Qatar, and other countries such as the United Kingdom and the United States of America. 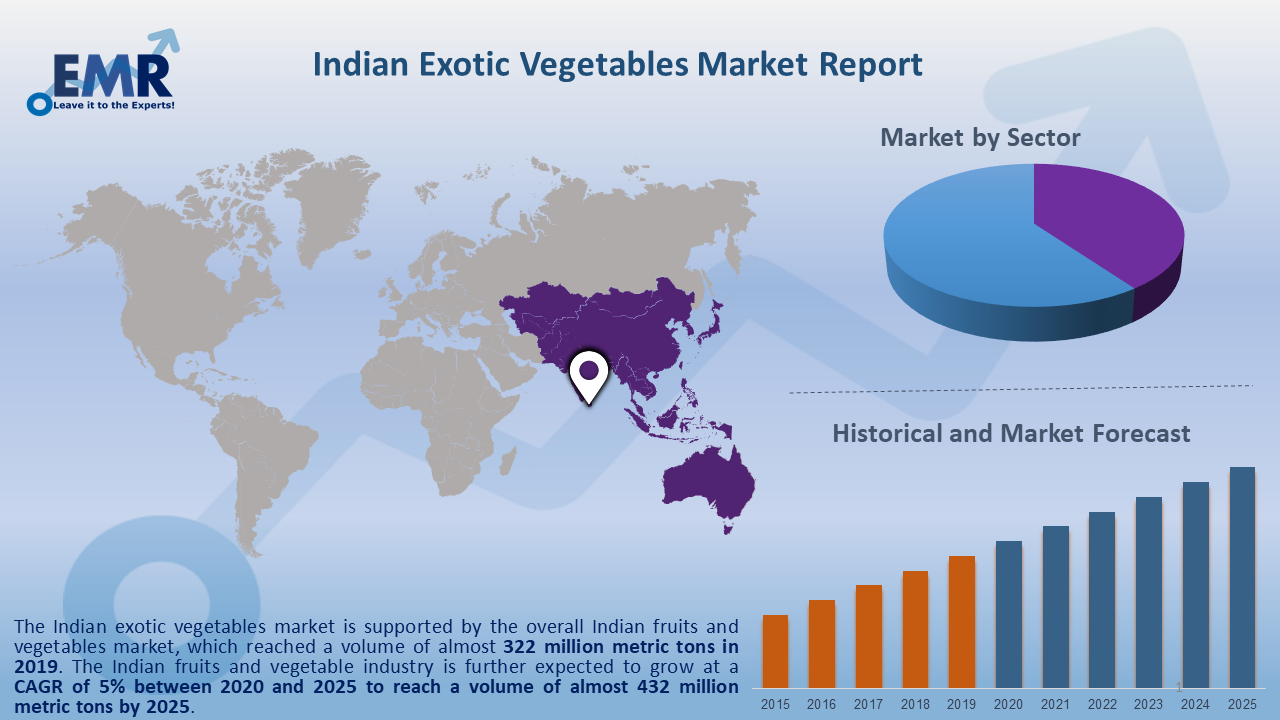 The exotic vegetables are those vegetables that are cultivated in a land not native to the vegetable. For instance, broccoli, parsley, and cherry tomato, among others, are not native to India, but their seeds are imported, and they are grown in the country under favourable climate and weather conditions, despite it being non-domestic.

Based on variety, the Indian exotic vegetables industry is divided into:

The industry is bifurcated based on sector into:

Based on the distribution channel, the industry is divided into:

The industry is divided based on the leading vegetable producing states in India into:

On the basis of the leading vegetable consuming states in the country, the industry is divided into:

The Indian exotic vegetable market is driven by the rapidly growing economy. India is also the largest producer of several agricultural commodities, which is aiding the market growth. The government is proactive in forming and executing several policies to strengthen the market growth. The rising increase in the exotic vegetable demand has attracted corporate houses to boost their investments in the industry. The country also offers incentives that are in favour of the investor, such as favourable policies for foreign direct investment in trading, including through e-commerce, for food products produced or manufactured in India.

The report gives a detailed analysis of the following key players in the Indian exotic vegetables market, covering their competitive landscape, capacity, and latest developments like mergers, acquisitions, and investments, expansions of capacity, and plant turnarounds:

The report by EMR covers the macro and micro aspects of the industry. The comprehensive EMR report provides an in-depth assessment of the industry based on Porter's five forces model, along with giving a SWOT analysis. It also provides a detailed analysis of the price trends and global trade data. The report gives an overview of the global market as well.

What was the Indian exotic vegetables market size in 2020?

The major drivers of the industry, such as rapidly growing economy, favourable government initiatives, increase in the exotic vegetable demand, and increasing investments, are expected to aid the market growth.

What are the key industry trends of the Indian exotic vegetables market?

The key market trend guiding the growth of the market includes the growing number of farms specialising in producing exotic vegetables.

What are the major regional markets of exotic vegetables in India, according to the EMR report?

What are the major varieties of exotic vegetables in the industry?

What are the significant sectors of exotic vegetables?

What are the major distribution channels of exotic vegetables in the industry?

The major distribution channels of exotic vegetables in the industry are unorganised retail, supermarket/hypermarket, online, and exports, among others.

EMR’s meticulous research methodology delves deep into the market, covering the macro and micro aspects of the industry. Based on its varieties, the Indian exotic vegetables industry can be segmented into mushrooms-button, sweet corn, baby potatoes, cherry tomatoes, broccoli, coloured capsicum, zucchini, lettuce, and purple cabbage, among others. On the basis of sectors, the industry is bifurcated into organised and unorganised sector. By distribution channels, the industry is divided into unorganised retail, supermarket/hypermarket, online, and exports, among others. The major regional markets for Indian exotic vegetables are Uttar Pradesh, Maharashtra, Bihar, Madhya Pradesh, West Bengal, and Gujarat, among others. The key players in the above market include Shreenath Agro Tech Pvt Ltd, Lawrencedale Agro Processing India Pvt Ltd., Nisarg Nirman Agro Products Pvt. Ltd., S. P. Vegetables., Anusayafresh, Green Earth Fresh Produce (P) Ltd., Reliance Retail, Big Basket, and Natures Basket Limited, among others.

The global salacia market is being driven by the rising demand for plant based products and herbal medicines. Aided by the growing investments into R&D, the global herbal medicine market is expected t...
Read More

The global red clover market is being driven by rising health consciousness. Aided by the rising demand for organic food, the market is expected to witness a robust growth in the forecast period of 20...
Read More

The Indian exotic herbs market is expected to be supported by the growing exports of medicinal herbs in the forecast period of 2021-2026. India is the second largest exporter of medicinal herbs, expor...
Read More

The Indian exotic flowers market is being supported by the Indian floriculture market, which reached a value of INR 187.6 billion in 2020. The floriculture industry is further expected to grow at a CA...
Read More