The global kombucha tea market reached a value of USD 1.85 billion by 2019, rapidly growing at a CAGR of 23% during the period of 2015-2019. It is expected to witness a healthy growth in the coming five years too, with a projected CAGR of 20.6% in the forecast period of 2020-2025, attaining a value of USD 5.6 billion by 2025. The swift growth of the market, the fastest of any functional beverage globally, is driven by a rising demand for the beverage in emerging economies due to lifestyle changes and the drink’s abundant health benefits. 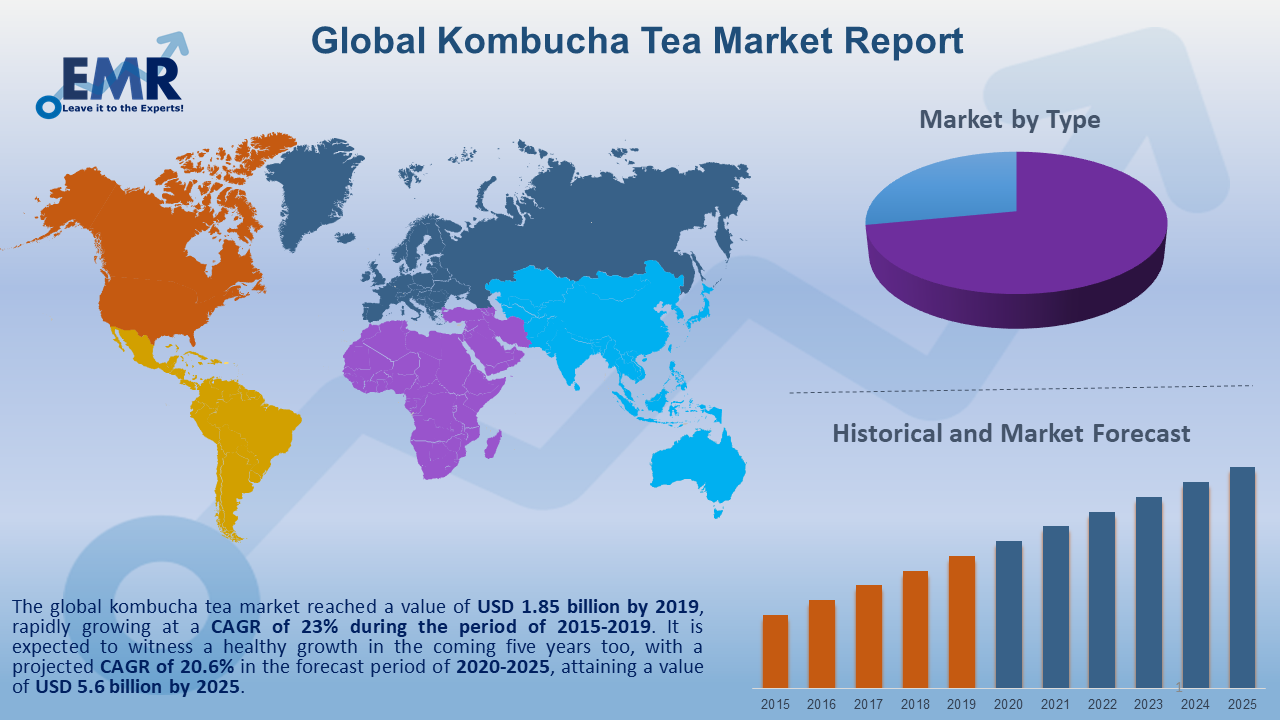 Kombucha, also known as tea mushroom, is a slightly alcoholic functional beverage, which is made by fermenting tea and sugar with the kombucha culture or SCOBY (Symbiotic Culture of Bacteria and Yeast).  Depending on the type of the tea used, Kombucha’s taste ranges between sparkling apple cider and champagne. The drink is broadly categorised as:

Kombucha tea is available in various different flavours like regular/original, fruits, herbs and spices, flowers, and others. Manufacturers are experimenting with new flavours like a blend of flowers, fruits and herbs and spices, catering to the emerging preferences of a large proportion of consumers. It is thought to have several health benefits like detoxification, joint care, maintaining a healthy digestion, strengthening of immune health and cholesterol reduction.

Kombucha tea is accessible widely in supermarkets/hypermarkets, convenience stores, health stores, and through online retailers, among others. The beverage is proving to be especially popular in the retail and institutional segments of the emerging markets due to changing food habits, increasing incomes and urbanisation.

Rising health awareness among potential consumers combined with increasing cases of chronic and lifestyle related diseases are the primary industry drivers. The acceptance of the product by consumers in key markets who have started consuming the product in an almost regular basis has also been a catalyst for the market with major manufacturers taking note of the rising demand. Consumer preference for healthier probiotic food has provided a further impetus to the market.

The easy accessibility of kombucha tea via various supermarkets and convenience stores is also a major driving factor. Due to changes in lifestyle and increasing urbanisation, the number of cafes and restaurants are growing in both emerging and mature markets. Thus, cafes are increasing becoming spaces where consumers can not just socialise but also partake in kombucha tea, adding to the growth of the market.

While kombucha tea was historically consumed in Eastern Europe, Russia and Japan, the recent emergence of the drink is driven by an extensive demand in Western countries with a shorter kombucha tea drinking history. However, the beverage is also seeing a rising demand in emerging markets like Middle East, Eastern Europe, and South East Asia, among others. Latin America and Asia Pacific are currently the fastest growing markets globally, owing to changes in food habits, rise in urbanisation and increase in disposable incomes.

The report analyses the following key players looking into their capacity share and latest developments like capacity expansion, plant turnarounds, and mergers and expansion:

EMR’s comprehensive report provides a SWOT analysis along with an analysis of the Porter’s five forces for the global kombucha tea market.

Nigeria is the leading regional market for alcoholic beverages in West Africa. The regional market is being driven by the rising urbanisation and growing population of people who are formally employed...

Energy drink consumption has become a symbol of status, particularly for the youth. It is expected that such consumer behaviour will lead to the higher overall demand for the product, thus, aiding the...

A few of the important variables driving the mezcal market growth are the increasing demand for premium spirit goods and the growing focus on sustainable product development methods. The United States...