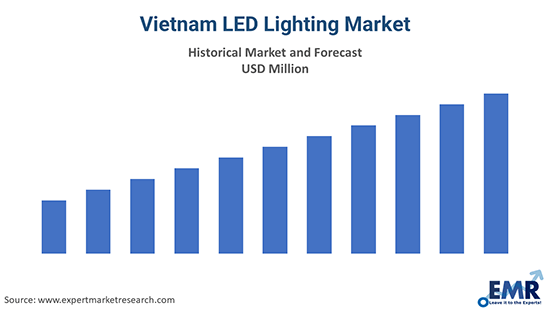 The market share for traditional lighting industry in Vietnam is expected to decrease with the growth of the LED lighting industry. LED lighting technology is replacing incandescent bulbs for street lighting applications at a rapid rate. Initially, the technology in Vietnam was restricted in its utilisation, finding uses in traffic lights and the advertisement industry. It has fast expanded to find applications in various sectors like in the restaurants and hotels as interior and exterior decorations.

LED will witness a higher penetration in the Vietnam market due to growing urbanisation in the country which will range between 27-45% by 2020. The thriving growth of commercial offices and a strong foreign investment in Vietnam is further expected to propel the industry forward.

Currently, about 200 companies have registered their LED products in Vietnam and have been divided into three broad groups. The first group, which contains 3% of the companies holding 10-20% market share in the Vietnam LED lighting industry, have modern production lines, standard testing systems, and R&D centres. The second group comprises of foreign-invested enterprises whose selling prices are generally higher than the average prices by two to three times. Thirteen percent of the 200 companies are included in this second group, with their products holding a 15-20% market share. The third group dominates the market with 60-70% market share and comprises of 84% of the companies. These are the companies assembling their products from imported components, mostly from China.

LED is a Light Emitting Diode where a semiconductor is used to produce light through the process of electroluminescence. LED lights are fast replacing traditional incandescent lights as they last longer, have a comparably cooler operating temperature, and are far more energy efficient. They are also far more versatile in its shapes, forms, and applications. 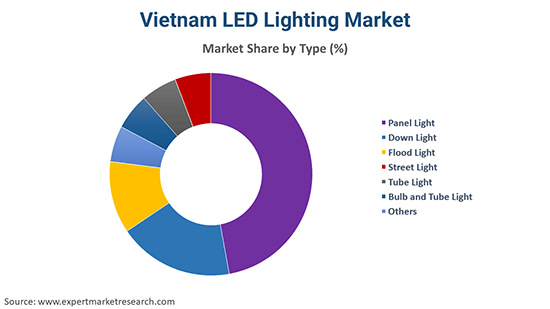 LED lighting is used in multiple lighting products like:

LED lighting find their primary application in the infrastructure sector in segments like: 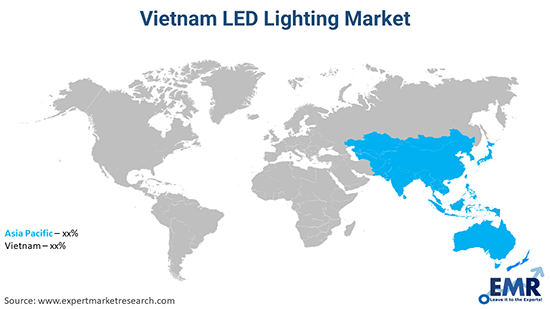 The Vietnam LED Lighting industry is expected to be supported by the various schemes of the government of Vietnam, promoting the use of energy efficient lighting due to the rise in electricity prices, growing concerns over energy wastage and climate change. Government programs are seeking the greater adoption of LED lighting by aiding the local LED lighting products manufacturing. The move away from compact fluorescent lamps (CFLs) started in the early 2000s as the consumers in Vietnam moved towards LED lighting technologies. With growing awareness among the consumers about the environment, LED lighting has seen a rising demand due to their reduced energy consumption and emissions of greenhouse gases as compared to CFLs and High-Intensity Discharge (HID) lamps.

The rising per capita income in Vietnam is expected to lead to an increasing demand for LED in the country. The growing infrastructure sector in the country will provide a further push to the Vietnam LED lighting industry. According to the Ministry of Planning and Investment of Vietnam, USD 150-160 billion is expected to be invested in new infrastructure by 2020. The LED lighting industry in the region is, thus, witnessing an increasing demand from lighting projects for newly-built factories and other commercially built infrastructure.

The thriving electronics industry is providing further impetus to the Vietnam LED Lighting industry. Vietnam is attracting international investors from electronics and home appliances sectors, especially from Korea, due to the lower land resources and labour force cost, growing infrastructure sector, rising economy, and political stability. The recently developed smart lighting system will also drive the LED industry. For now, the use of smart lighting is restricted to outdoor and high-end commercial lighting.

The report provides a detailed analysis of the following key players in the Vietnam as well as global LED lighting market, looking into their competitive landscape, capacity, and latest developments like capacity expansions, plant turnarounds, and mergers and applications:

The EMR report gives an in-depth insight into the industry by providing an analysis of the value chain and Porter’s five forces. It also provides a SWOT analysis of the market.

The Saudi Arabia lighting market is driven by the rising urbanisation and the real estate sector's rapid expansion, along with increased awareness and demand for smart and LED lighting.
Read More