Asia Pacific Renewable Energy Market to Aid the Global Market, Expected to Grow at a CAGR of 7.6% in the Forecast Period of 2021-2026.

The Asia Pacific renewable energy market is the fastest growing market and has also emerged as the largest market. The region accounts for almost 30% of the global market. Globally, almost 2455 gigawatts of renewable energy was installed in 2020. 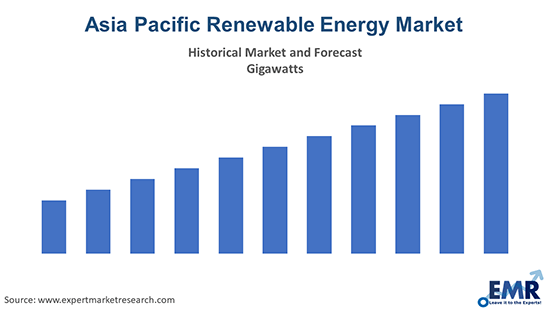 Within the Asia Pacific region, China and India account for the largest capacity, accounting for three-fourth of the region’s renewable energy capacity due to the high number of projects. These developing countries are investing in more geothermal energy production as it is better as well as cost affordable. Almost 80% of the wind energy potential is focussed in Asia. Japan also generates a considerable amount of renewable energy. China and India together have the largest capacity for photovoltaics (PV) technologies, which are expected to grow more in the coming years. The capacity for wind energy production is likely to grow more in the emerging Asian countries, especially in Thailand and Korea.

China is the leading country in terms of solar power generation as well as wind energy capacity. It accounts for around 696 gigawatts of renewable energy, whereas India holds nearly 118 gigawatts. China is the leading country in most of the production technologies, namely solar, wind, and hydropower. The country’s changing policies in order to reduce pollution caused by coal and other carbon emissions is aiding the rising demand for sustainable power sources in the region. China’s capacity increased by 10% in 2018. Programs like the Green Certificate Program, VAT Refund Policy, and tax discounts have helped the growth of industry in China.

India is another major country in the region where the market for renewable energy is growing due to increasing industrial tariffs and restrictions and the high number of power plants. Solar energy is the preferred technology in India due to its low system cost. Solar power grew by around 50% in 2018 as compared to the previous year. The country’s government has set targets for renewable energy, aiming to reach 175 gigawatts of sustainable power production by 2022. The industry is being supported by policies like feed-in-tariff as well as output-based incentives. 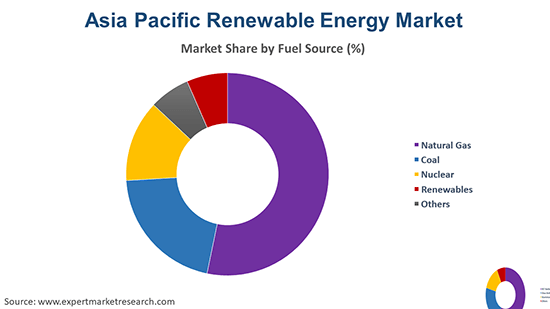 Based on types, the market can be divided into:

Based on the fuel source for electricity generation, the regional market can be segmented into the following:

The EMR report also covers the regional markets like China, Japan, India, and Australia, among others. 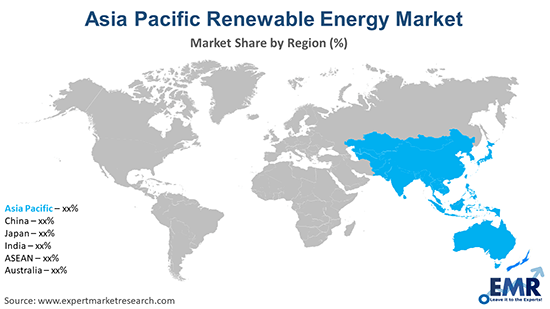 In the Asia Pacific region, the demand is majorly being driven due to increased sourcing locations. The region has high growth potential, especially in India and China. The growing economies of Asian countries are also supporting the growth of the industry. The growing economies are aiding the nations to invest more in renewable resources expansion to save resources like electricity and to minimise environmental damage.

Favourable government policies in the region, especially in India and China, are major drivers for the growth of the Asia Pacific market. In China, certain policies have been introduced by the Chinese government to encourage the production and adoption of sustainable power sources. In India, the expansion of production plants from the industries, as well as increased industrial tariffs, has led to the growth of the industry in the country.

The report gives a detailed analysis of the following key players in the Asia Pacific renewable energy market, covering their competitive landscape, capacity, and latest developments like mergers, acquisitions, and investments, expansions of capacity, and plant turnarounds:

What was the Asia Pacific renewable energy market size in 2020?

The Asia Pacific renewable energy market was supporting the growth of the global market for the same, which attained an installed capacity of almost 2455 gigawatts in 2020.

The major drivers of the industry, such as increased sourcing locations, growing economies of Asian countries, and favourable government policies, are expected to aid the market growth.

What are the key industry trends of the Asia Pacific renewable energy market?

The key market trend guiding the growth of the market includes the growing consciousness among consumers about environmental pollution and the damage caused by harmful emissions.

What are the major regions of the market in the Asia Pacific, according to the market report?

The major regions in the industry are China, Japan, India, and Australia, among others.

What are the dominant types of renewable energy in the industry?

The dominant types of renewable energy in the industry are hydropower, wind, solar, bio energy, and solid biofuels.

What are the major fuel sources of renewable energy in the market?

The major fuel sources of renewable energy in the market are natural gas, coal, and nuclear, renewables, among others.

The Asia Pacific renewable energy market is supporting the development of the overall renewable energy market, which attained an installed capacity of almost 2455 gigawatts in 2020. The market is being driven by favourable government policies within the Asian countries. Aided by the growing eco consciousness among consumers, the market is expected to witness a further growth in the forecast period of 2021-2026.

EMR’s meticulous research methodology delves deep into the market, covering the macro and micro aspects of the industry. Based on its types, the industry can be segmented into hydropower, wind, solar, bio energy, and solid biofuels. On the basis of fuel sources, the industry is divided into natural gas, coal, nuclear, renewables, and others.  The major regional markets for renewable energy in the Asia Pacific are China, Japan, India, and Australia, among others. The key players in the above market include TBEA Sunoasis Co., Ltd., Mahindra EPC Irrigation Limited, Tata Power Limited, Suzhou Talesun Solar Technologies CO., Ltd., Windflow Technology Ltd, Zhejiang Chint New Energy Development Co Ltd, Abengoa, and others.

The global market for biodiesel is being driven by the growing need for energy independence and rising environmental concerns all over the world. The product is biodegradable and enables the productio...
Read More