Europe Renewable Energy Market to Aid the Global Market Growth, Expected to Grow at a CAGR of 7.6% between 2021 and 2026. 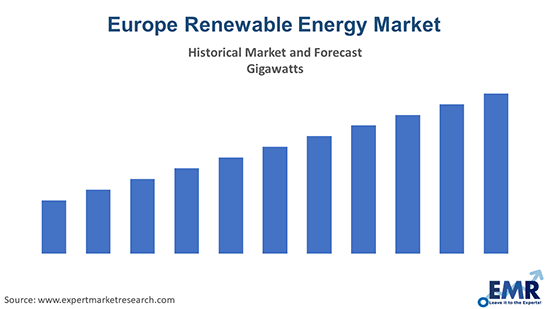 The global renewable energy industry is expected to grow at a CAGR of 7.6% between 2021 and 2026 and is expected to reach 3812 gigawatts by 2026. The Europe renewable energy market is driven by the diverse fuel sources distributed across the continent. The industry is expected to be driven by the phasing out of nuclear plants on the continent, which is leading to arising shift towards alternative and renewable power sources. The growing demand for electricity is also pushing the industry growth. Resources, including wind and hydro, have been further developed in Europe, while the solar potential is yet to be explored and tapped. The solar capacity is expected to increase in the forecast period in the region. The capacity installation of solar power in Europe is highest in Germany, Spain, and France. Currently, hydropower accounts for the largest capacity in Europe, accounting for 39% of the industry.

Renewable energy is extracted from sustainable sources, which are naturally replenishable; that is, it cannot be exhausted completely. It offers energy to be used in the production of electricity, transport, air and water cooling or heating and other energy services. 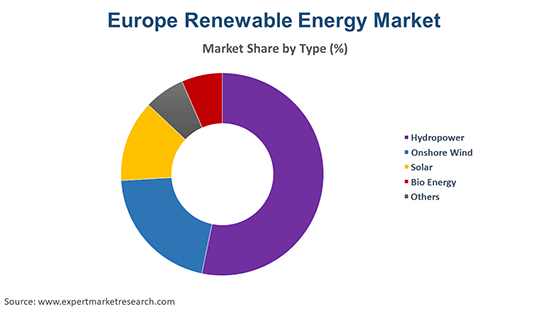 On the basis of types, the Europe renewable energy market can be divided into:

Based on the fuel source, the industry can be segmented into:

The EMR report also covers the regional markets like Germany, France, Italy, and the United Kingdom, among others. 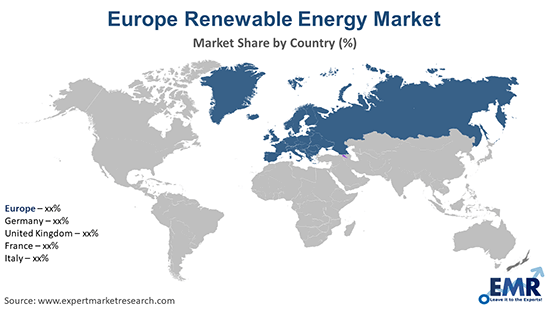 The Europe renewable energy market is driven by the significant demand from the hydropower and onshore wind energy in the region. Due to advancements in technology, the cost has been reduced, making it an attractive option in terms of investment. Markets such as France, Italy, and Spain largely depend on hydropower as the source for generating electricity, further invigorating the industry growth for alternative power sources. Countries such as Sweden, Austria, France, and Norway offer highly suitable geography and growth potential for hydropower, further enhancing the industry growth. France and Germany provide a growth potential for biomass.

Solar is expected to be the preferred technology due to a decrease in the system cost, thus, enhancing the market growth for alternative energy sources. Several economies in Europe are adopting renewables instead of fossil fuels, further propelling the growth of the industry forward. The decrease in the consumption of fossil fuel, along with the dwindling nuclear power plants, has resulted in the rise of investments in renewables, which is supporting the growth of the industry. The rising demand from the electricity sector will also aid industry growth. Countries such as Germany, Italy, the United Kingdom, and Spain are the major countries in Europe on the basis of renewable installed capacity and offer healthy growth potential for renewable power resources.

The report gives a detailed analysis of the following key players in the Europe renewable energy market, covering their competitive landscape, capacity, and latest developments like mergers, acquisitions, and investments, expansions of capacity, and plant turnarounds:

What was the Europe renewable energy market size in 2020?

In 2020, the Europe renewable energy market attained a value of nearly 2455 gigawatts.

The major drivers of the market include the advancements in technology, government schemes and tax benefits, use of alternative and sustainable power sources, increasing awareness about the positive effects of green energy, rising demand from the electricity sector, and phasing out of nuclear plants.

What are the key industry trends of the Europe renewable energy market?

The significant demand from the hydropower and onshore wind energy and increasing global awareness regarding environmental pollution and climate changes are the key industry trends propelling the market's growth.

The major regions in the industry are Germany, France, Italy, and the United Kingdom, among others.

What are the types of renewable energy in the market?

On the basis of types, the Europe renewable energy market can be divided into hydropower, onshore wind, solar, and bio energy, among others.

The major players in the industry are The Juwi Holding AG, WKN GmbH, ABO Wind, Neoen, and JinkoSolar Holding Co., Ltd., among others.

The Europe renewable energy market attained a value of nearly 2455 gigawatts in 2020, driven by the significant demand from the hydropower and onshore wind energy. Aided by use of alternative and sustainable power sources and increasing global awareness regarding environmental pollution and climate changes, the market is expected to witness further growth in the forecast period of 2022-2027.

EMR's meticulous research methodology delves deep into the market, covering the macro and micro aspects of the industry. On the basis of types, the Europe renewable energy market can be divided into hydropower, onshore wind, solar, and bio energy, among others. The major regional markets for renewable energy market are United Kingdom, Germany, France, and Italy, among others. The major players in the industry are The Juwi Holding AG, WKN GmbH, ABO Wind, Neoen, and JinkoSolar Holding Co., Ltd., among others.