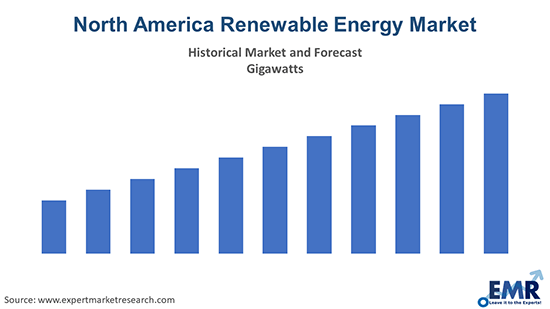 The United States to Lead the Regional Market for Renewable Energy

North America is among the leading countries having sustainable energy technologies and infrastructure. The North America renewable energy market is being driven by the increasing growth in solar PV due to the lowering technology cost in the past few years. The United States is a significant market in the industry globally. The United States is focusing on increasing its contribution to the global renewable energy market by up to 30% by the year 2026. The country’s electricity market is currently primarily fuelled by fossil fuels. Other markets in the region, such as Canada, are also growing at a steady pace due to increased capacity in the wind and solar power technologies.

Renewable energy is derived from renewable sources, which are naturally replenishable; that is, it cannot be exploited thoroughly. It includes sources like sunlight, rain, wind, tides, waves, and geothermal heat. Most important renewable energies include wind, biomass, hydropower, and solar energy. They provide energy to be used to produce electricity, transport, air, water cooling or heating, and other services. 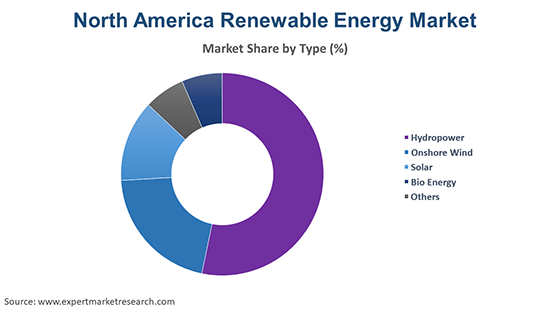 Based on type, the market can be divided into:

The major countries included in market are United States of America and Canada. 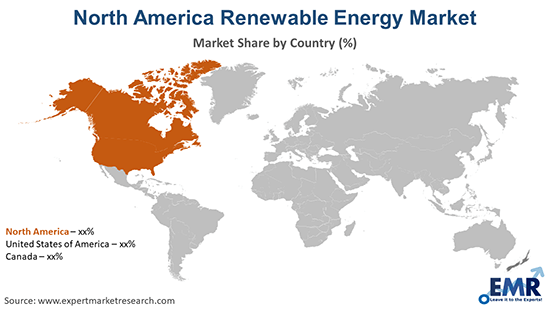 The growth of the market in the North American region is being driven by the changing policies and regulatory framework of the government to increase the reliance on renewable energy resources and minimise the dependence on fossil fuels for energy. The rising expertise in grid operators and the rising research to enhance the system of renewable energy extraction with minimised failures is also augmenting the market growth.

The North America renewable energy market is driven by the increase in alternative power capacity addition in the region. The consumers are becoming aware of the global effects of environmental pollution and climate changes, which are caused by fossil fuels and conventional power resources like oil, coal, and natural gas, hence, increasingly preferring the use of alternative power sources for various purposes. Due to the burn out of natural resources, alternative power sources are being preferred and demanded to ensure environmental sustainability. Thus, the rising awareness regarding green power sources is providing an impetus for industry growth. The government encourages the use of sustainable power sources by offering tax reliefs and other benefits for the adoption of renewable energy, thus, propelling the industry further. The adoption of solar power as a part of renewable portfolio targets (RPS) and Federal investment tax credit (ITC) is aiding the industry growth. Increased investments by the governments in alternative power plants to economize electricity and restrict environmental hazards are augmenting the market growth.

In North America, hydropower majorly contributes to the generation of renewable energy electricity, having an industry share of 44%. It is followed by onshore wind power. The energy sector is increasingly shifting from conventional to renewable power sources on account of innovation, ease of digitalisation, increased consumer demand, and rising price parities invigorating the North America renewable energy market. Solar and wind power are witnessing rising installations in the region, especially in Canada. There are several opportunities in the pipeline in the non-residential and utility PV segments, thus, enhancing the North America market growth. In Canada and the United States, the potential for wind power has risen. In both countries, the supplier base for wind is strong, attracting further investments.

Key Players in the Renewable Energy Market in North America

The report gives a detailed analysis of the following key players in the North America renewable energy market, covering their competitive landscape, capacity, and latest developments like mergers, acquisitions, and investments, expansions of capacity, and plant turnarounds:

What was the North America renewable energy market size in 2020?

The renewable energy market in North America is being aided by the global renewable energy installations, which is projected to grow at a CAGR of nearly 7.6% in the forecast period of 2022-2027.

The renewable energy market in North America is likely to be aided the rising global installations, which is expected to reach 3812 gigawatts by 2026.

The major drivers of the industry include rising disposable incomes, increasing population, growth in solar PV due to the lowering technology cost, and the rising alternative power capacity addition.

What are the key industry trends of the North America renewable energy market?

The adoption of solar power as a part of renewable portfolio targets (RPS) and Federal investment tax credit (ITC) is expected to be a key trend guiding the growth of the industry.

What are the major regional markets of renewable energy in North America, according to the EMR report?

The United States of America and Canada are the leading regions in the market.

What are the leading types of renewable energy in the industry?

The leading types of renewable energy in the industry are hydropower, onshore wind, solar, and bio energy, among others.

The leading players in the market are NextEra Energy, Inc, Schneider Electric, Swinerton Renewable Energy, Signal Energy LLC, and M. A. Mortenson Company, among others.

EMR’s meticulous research methodology delves deep into the industry, covering the macro and micro aspects of the industry. Based on types, the market can be segmented into hydropower, onshore wind, solar, and bio energy, among others. The major regional markets of renewable energy in North America are the United States of America and Canada. The key players in the above industry include NextEra Energy, Inc, Schneider Electric, Swinerton Renewable Energy, Signal Energy LLC, and M. A. Mortenson Company, among others.