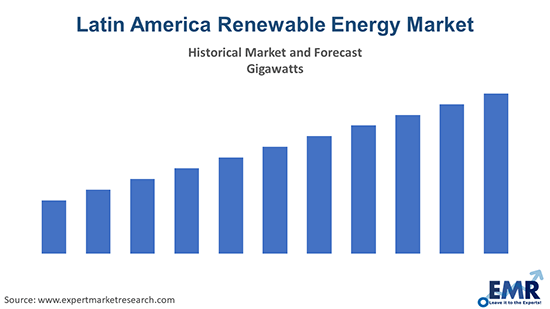 The Latin America renewable energy market is expected to be driven by the steady growth in hydro and biomass across the region. Hydropower is the leading sector in the region, accounting for nearly 81% of the market. The region receives high solar radiation and the project cost of solar is also lower as compared to the other areas owing to the locally available solar technologies, making it a highly attractive investment. Chile, especially, is expected to exhibit accelerated growth in solar capacity addition in the region. Countries such as Brazil, Argentina, Chile, Uruguay, and Peru are investing in the wind capacity to diversify their alternative power portfolio.

The rising awareness among consumers with respect to the environmental issues caused by the use of conventional power sources such as coal, fossil fuel, etc., has led to an increasing preference for alternative power projects by many countries. In 2017, the global renewable energy market witnessed an investment of about USD 280 billion. Hydro, solar, and wind power are the leading sources for alternative and sustainable power generation globally.

The recent cost reduction along with evolving technologies and surging renewable energy policy reforms provides an opportunity to enhance renewable energy potential in Latin America. Going further, the progress and developments in the renewable energy market in Latin American region is bolstering economic development along with addressing climate change. Favourable government initiatives in the region are also adding to the Latin America renewable energy market growth. For instance, in April 2022, National Renewable Energy Laboratory (NREL) underscored that Mexico has great potential to become a clean energy powerhouse, with the boost of beneficial policies and private investment. NREL aims to install an additional 2,336 MW to surpass 4 GW mark in distributed generation segment. This will also promote economic activities in the country. Further, the adoption of bifacial solar technology that generates energy from both sides of the panel is expected to fuel the market demand for renewable energy in the region over the forecast period.

Renewable energy is generated from sources that are naturally replenishable, meaning they do not deplete in a human’s lifetime. Renewable energy such as wind, biomass, solar, and hydropower, among others, are few of the common examples. They do not harm the environment like non-renewable sources or conventional sources such as fossil fuels. The energy derived from such alternative power sources is used in the generation of electricity, transport, air, and water cooling or heating, and other services. 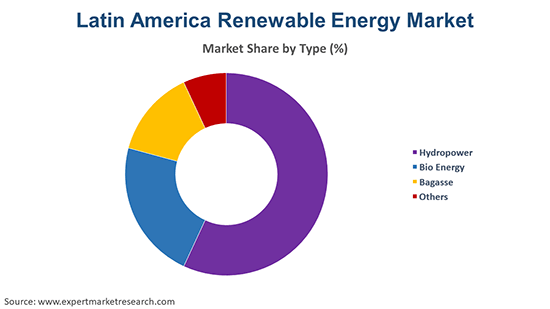 On the basis of types, the market can be divided into:

The EMR report also covers the regional markets in Latin America, like Brazil, Argentina, and Mexico, among others. 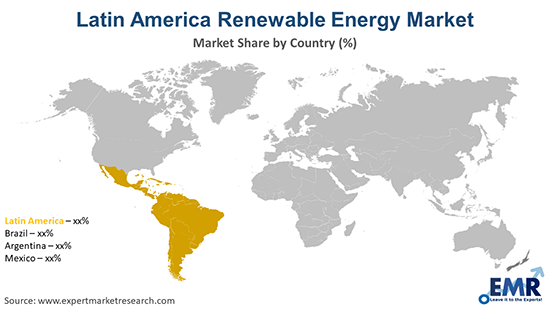 The Latin America renewable energy market is driven by the high investment in the small bioenergy capacities connected to the grid. The abundant availability of raw materials such as woods and bio-wastes in the region is enhancing the bioenergy in the region, bolstering the market growth of renewable energy in Latin America. The alternative power sources in the region are significantly affected by hydro and biomass, among other sources. Few countries such as Chile and Brazil are witnessing rising solar and wind investments. Hydro power is the key source of energy generation in most countries in Latin America, which is augmenting the market growth.

Latin America exhibits excellent potential for hydropower. In 2018, the total installed capacity of hydropower was 170.82 gigawatts. Although the effect of solar and wind power is less, it is expected to have strong growth in the public and private investment. In Brazil, hydroelectric power will remain a substantial contributor to the overall electricity production of Brazil, and it is expected to receive continued healthy investments. Wind power is expected to go through the largest relative growth, multiplying by more than ten times in the ten-year period. Electricity generation through biomass is majorly being driven by the sugarcane and pulp processing industries, further strengthening the Latin America renewable energy market growth. In Brazil, the solar potential is high, which is untapped yet due to a lack of government support.

Argentina is expected to achieve a 20% demand for national energy from renewable sources by 2026. The country is inviting the best energy companies in its auction 2 gigawatts of renewable power projects. The country is expected to develop policies and award contracts with the help of the RenovAr program to help provide widespread alternative power projects in solar, wind, and biomass. In 2017, the Argentina government announced it the ‘renewable energy year.’ The electricity consumption of the country is increasing due to the rising use of the residential and commercial sectors, catalysing the market in Argentina.

The report gives a detailed analysis of the following key players in the Latin America renewable energy market, covering their competitive landscape, capacity, and latest developments like mergers, acquisitions, and investments, expansions of capacity, and plant turnarounds:

The comprehensive EMR report covers the micro and macro aspects of the market. The report provides an in-depth assessment of the market based on Porter’s Five Forces model, along with giving a SWOT analysis.

What was the Latin America renewable energy market size in 2020?

The major drivers of the market include the steady growth in hydro and biomass, rising awareness among consumers with respect to environmental issues, increasing electricity consumption, and rising solar and wind investments.

What are the key industry trends of the Latin America renewable energy market?

The high investment in the small bioenergy capacities connected to the grid and the abundant availability of raw materials such as woods and bio-wastes are the key industry trends propelling the market growth.

What are the major regional markets of renewable energy in the Latin America, according to the EMR report?

The major regions in the industry are Brazil, Argentina, and Mexico, among others.

What are the types of renewable energy in the market?

On the basis of types, the industry can be divided into hydropower, onshore wind, solar, and bioenergy, among others.