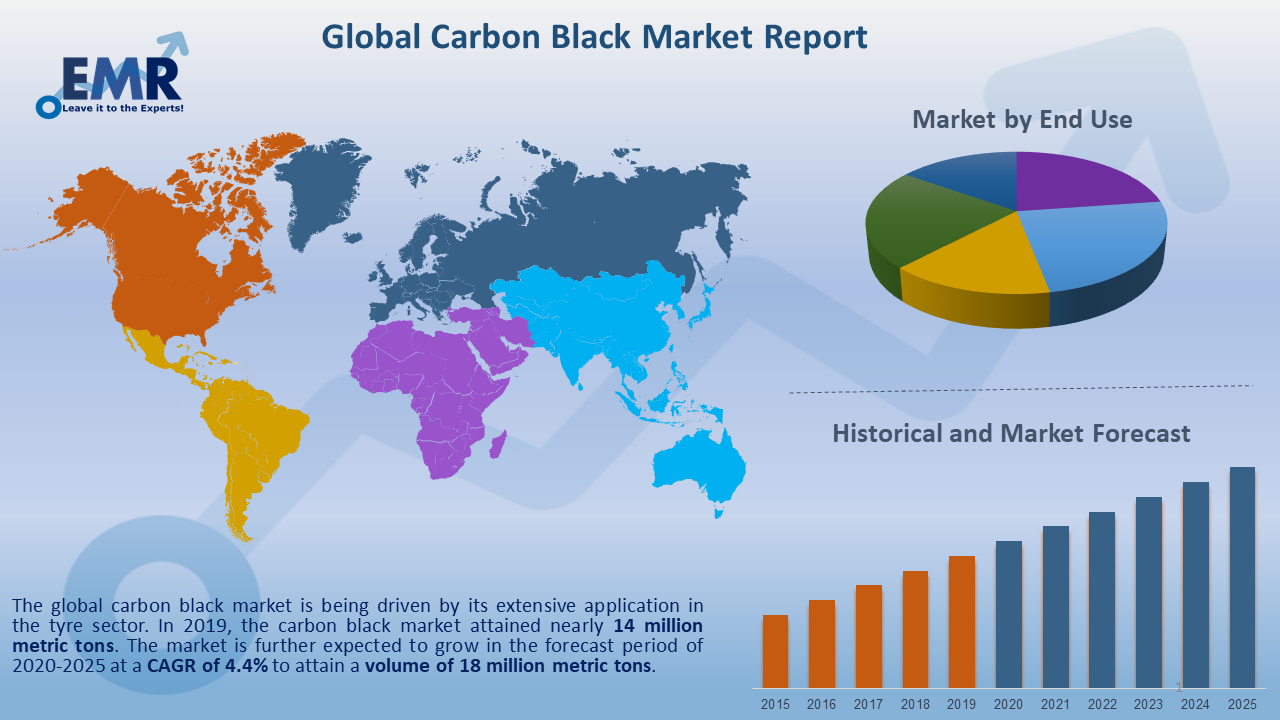 Nearly 90% of the carbon black produced, globally, is utilised in rubber-related applications where it is used as a reinforcing filler. The market for the substance is finding the majority of its impetus from the growing tyre industry whose global demand stood at 3112 million tons in 2018 and is expected to grow at a healthy pace in the coming years. The Asia Pacific market will be driven by its expanding tyre industry with tyre manufacturers switching their production bases to the emerging economies within the region. China is also the leading market for this industry, accounting for nearly half the global market. The tyre industry in China is being driven by its growing car market whose global share increased by almost 21% in 2016, since 2007. Other major markets for carbon black like the US and Western Europe, on the other hand, are expected to witness a rise in the demand for speciality carbon blacks.

Carbon black is manufactured through the partial combustion of materials like natural gas or petroleum and appears as a finely divided form of black amorphous carbon. By product types, it can be categorised as specialty, lamp, channel, acetylene, furnace, gas, commodity, and thermal black, among others. Its common grades are specialty grade, standard grade, N330, N550, N660, N220, and N990, among others. It finds applications across diverse sectors as an ink pigment, in the reinforcement of rubber, and as an electric conductive agent. Its application sectors can be categorised as:

The global carbon black market is being driven by its expanding applications in the tyre industry, along with industries like construction, manufacturing, and printing. Along with China, the other significant markets for tyre are Europe, the United States, India, and Japan. The steady pace of growth in the ownership of cars is also aiding the industry as it is adding to the rise in the demand for tyres. The automobile industry is expected to witness an increase in demand, especially from emerging economies like China and India. India, a major carbon black industry in Asia after China, is projected to be the third largest automobile industry by 2021. The growing demand for replacement tyres in countries like the US and China will also aid the industry.

The increasing end-uses of speciality products, especially in developed countries like the US is driving the growth of the industry. These products find their applications in segments like sealants, adhesives, and coatings, among others, which are also expected to grow in the coming years due to the infrastructural development taking place across the world. The increasing penetration of these products in emerging markets like China, Southeast Asia, Middle East, and South America will further drive the growth of the global carbon black market.

With leading manufacturers increasingly investing in R & D undertakings, the market is expected to see further growth due to the addition of new end-uses of the substance with technological advancements. Amidst environmental concerns, manufacturers are also investing in making the production process sustainable and leading to lesser waste generation. Plastics, inks, and printing will be the other expanding application sectors for carbon black. The growth in the packaging industry in the US will provide further impetus to the industry as it is aiding the plastics industry in the region.

The report provides a detailed analysis of the following key players in the global carbon black market, looking into their market share, capacity, and latest developments like mergers and acquisitions, capacity expansions, and plant turnarounds:

The EMR report provides an in-depth insight into the market by providing a SWOT analysis as well as an analysis of Porter’s Five Forces.

EMR’s meticulous research methodology delves deep into the industry, covering the macro and micro aspects of the industry. Based on its product types, the global carbon black market can be segmented into specialty, channel, acetylene, lamp, gas, commodity, furnace, and thermal black, among others. Specialty grade, standard grade, N330, N660, N220, N550, and N990 are the various grades available in the market. On the basis of application, the transportation sector on of the leading application segment in the market. The major regional markets for carbon black in Asia Pacific, Europe, Middle East and Africa, Latin America, and North America, with Asia Pacific accounting for a significant share of the market. The key players in the above industry include Birla Carbon, Cabot Corporation, Continental Carbon Company, Orion Engineered Carbons S.A, Tokai Carbon Co., Ltd., Longxing Chemical Industry Co., Ltd., Bridgestone Corporation, and Mitsubishi Chemical Holdings Corporation among others.

The major drivers of the industry such as the rising demand for specialty products, infrastructural growth, the robust growth of automotive sector, and technological advancements in the industry are expected to aid the market growth. EMR’s research methodology uses a combination of cutting-edge analytical tools and the expertise of their highly accomplished team, thus, providing their customers with market insights that are accurate, actionable, and help them remain ahead of their competition.

EMR’s approach gives their clients a comprehensive assessment of the prevailing and projected market conditions through the collection, collation, and analysis of data from trusted sources. The key questions answered in the report are:

The global acetone market demand reached a volume of nearly 7 million metric tons in 2019. The demand is estimated to grow at a CAGR of 3.4% in the forecast period of 2020-2025 to reach a volume of ar...

The Latin America carbon black market attained a production volume of almost 0.7 million metric tons in 2019. It is expected to grow further in the forecast period of 2020-2025 and will aid the growth...

The Europe carbon black market is being driven by its rising demand from industries like the thriving automotive and infrastructure industries. In 2019, almost 2.10 million metric tons of carbon black...