LATAM (Latin America) Palm Oil Market to Contribute to the Forecasted Global Market Growth at a CAGR of 1.9% between 2022-2027

The Latin America palm oil market attained almost 4 million metric tons in 2020. The region accounts for 6.2% of the global production. 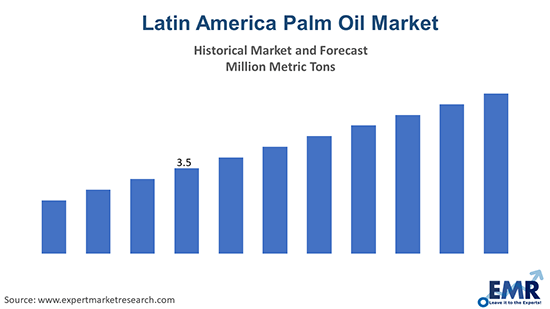 Colombia is the fourth largest producer of palm oil in the world, just behind Indonesia, Malaysia, and Thailand and is the leading producer in the Latin America region. The market in Colombia accounts for 6% of the country’s total GDP.  Its production in the country suffered in 2016 due to the climatic conditions caused by the El Nino phenomenon. However, the production recovered in 2017, witnessing a 42% increase from 2016. In 2017, 1.6 million metric tons of crude palm oil was produced in the country. A significant proportion of the palm oil produced in the country is exported. More than half the exports by Colombia is bound towards Europe, especially to countries like Spain and Germany In 2017, palm oil-related exports reportedly generated USD 414 million in export revenues.

Ecuador is also a significant producer in the Latin America market, falling just behind Colombia, Guatemala, and Honduras. The average annual output of CPO (Crude Palm Oil) in Ecuador is 0.7 million metric tons, which is grown in around 2,80,000 hectares of land. It is the largest exporter of CPO in South America, exporting 60% of its production of CPO.

Palm oil is a superior quality oil which originated in West Africa and is derived from the oil palm tree. It is primarily grown in tropical countries. It is chiefly used for cooking in emerging economies. Over the years it has found diverse applications in both food and non-food sectors. It is finding increasing use in the home and personal care sector as a component of lipsticks, soaps, detergents, skin-care products, and other cosmetic products. Biofuel is another significant emerging application sector for palm oil. 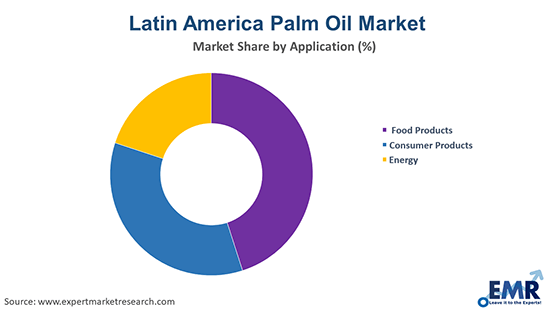 The application sectors for palm oil can be broadly divided into:

The EMR report looks into the production and consumption of palm oil in Latin America countries like Colombia, Ecuador, Brazil, Mexico, and Guatemala, among others. 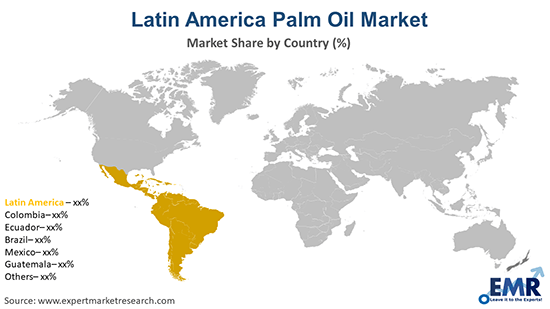 While oil palm and rapeseed are both major oil crops with significant productivity levels, oil palm is five times more productive in its oil yield than rapeseed. Globally, palm oil finds widespread application in food products such as cooking oil, shortenings, and margarine as well as a feedstock for biodiesel. Nearly 70% of the global palm oil production is used in food applications, with personal care applications accounting for 25% and biodiesel accounting for 5%. Palm oil’s application as a biodiesel feedstock is expected to witness a significant growth in the coming decade with the rising demand for alternative energy sources.

In Latin America, the expansion of palm oil crops supported by various government schemes is driving the Latin America market, especially in countries like Ecuador, Colombia, Honduras, and Peru.  Government subsidies programs encouraging the substitution of illicit crops like cocaine and poppy is providing a further impetus for the increase in the palm oil crops. The projected increase in food consumption in the region will also aid the market growth. Green policies by governments in the Latin America region promoting the use of biodiesel will further propel the market forward. In Colombia, palm oil forms an essential component in the country’s biodiesel industry which is required by law to account for 10% of the total automobile fuel sold in the country. Industrial infrastructure for the processing of palm oil is being consolidated in the region to increase production for exports and domestic demands.

The report analyses the following key players in the Latin America palm oil market looking into their market share, capacity, and latest developments like mergers and acquisitions, expansions of capacity, and plant turnarounds:

The EMR report gives an in-depth analysis of the market by providing a SWOT as well as Porter’s five forces analysis.

What was the Latin America palm oil market size in 2020?

The market is projected to be driven by the global market, which grew at a CAGR of about 1.9% in the forecast period of 2023-2028.

The major drivers of the industry include rising disposable incomes, increasing population, and the increasing health consciousness.

What are the key industry trends of the Latin America palm oil market?

The introduction of green policies by governments is expected to be a key trend guiding the growth of the industry.

What are the major regional markets of palm oil in Latin America, according to the EMR report?

Colombia, Ecuador, Brazil, Mexico, and Guatemala, among others, are the leading regions in the market.

What are the major application sectors of the product?

The major application sectors of the product are foods products, consumer products, and energy.

The Latin America palm oil market attained a volume of 4 million metric tons in 2020, driven by the rising health consciousness. The market is expected to aided by the growth of the global market, which is expected to witness a moderate growth in the forecast period of 2023-2028, growing at a CAGR of 1.9%.

EMR’s meticulous research methodology delves deep into the industry, covering the macro and micro aspects of the industry. Based on application, the market can be segmented into foods products, consumer products, and energy. The major regional markets are Colombia, Ecuador, Brazil, Mexico, and Guatemala, among others. The key players in the above industry include Wilmar International Ltd., Cargill, Incorporated, Bunge Limited, Archer Daniels Midland Company, and Reforestadora de Palmas del Petén S.A. (Grupo HAME), among others.