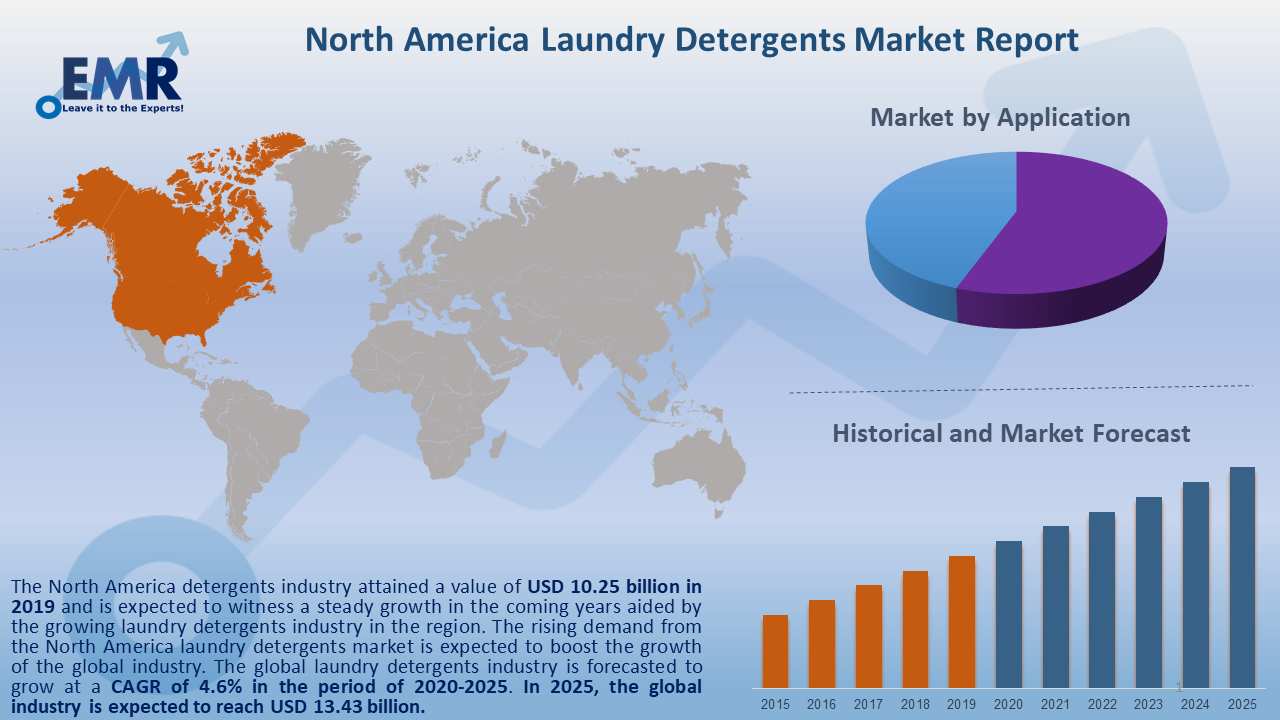 The Asia Pacific is the largest regional market in the industry, accounting for nearly half of the industry, globally. The Asia Pacific market is followed by Europe and North America as the other significant regions in the industry. The latter two regions also contribute significantly to the trade of the product. The United States of America is the leading exporter of the product after Germany, in terms of value. The US is also the largest market for the product within the North America laundry detergents market. Accounting for the majority of the regional industry, the industry in the US is being driven by its large consumer base as compared to Canada. The disparity in the consumer base in the markets of the two countries is due to the disparity of population between the two countries. While the US population in 2018 stood at 372.2 million, the population of Canada in 2018 was 37.1 million.

The North America detergents market is expected to witness a hike of 8% in 2024 as compared to 2019, aided by the rising demand for laundry detergents in the region. The regional industry is dominated by the enzymatic segment of the product, which accounts for almost 90% of the industry share. The segment is projected to see a steady growth in the coming five years buoyed by the stable increase in demand. The segment will witness a faster growth in the forecast period as compared to non-enzymatic type. The industry growth of enzymatic detergents in in the region is being driven by its favourable properties like its ability to breakdown tough stains even in cold water. By form, liquid detergents dominate the regional industry, in contrast to the trend in the global industry in which powder form make up the largest segment. Pods are also forecasted to see a healthy growth in the region. In 2017, North America was the leading market for pods and is expected to maintain its position in the forecast period. The industry for pods in the region is being driven by their effectiveness and convenience of use. On the basis of application, the household sector dominates the regional industry driven by the increasing residential laundry care demand.

Laundry detergents contain diluted surfactants or a mixture of surfactants, which imbibe the product with cleansing properties. They can be bifurcated into enzymatic and non-enzymatic types. By form, they can be categorised as:

Their application sectors can be divided into household and industrial and institutional segments. The major regional markets in North America are the United States of America and Canada.

The North America laundry detergents market is being driven by the growth of the household sector in the region, with increased per capita expenditure on cleaning products. The residential laundry care demand is being propelled forward by the rising population and increasing disposable incomes. The increased spending power of consumers is leading to the growth of consumerism, especially in the textile industry. Thus, the increase in consumption of clothes is driving the growth of the household application sector. The household application sector in the industry is also witnessing a rise due to the convenience and cost-effectiveness of the segment as compared to the commercial sector. While the household sector dominates the industry, the industrial sector is also expected to witness a growth due to the rising demand from the textile and hospitality industries, and the increased demand for laundry services.

The industry in North America is being aided by the increasing innovations taking place with the industry. The growing demand for organic and sustainable products is also providing further impetus for the industry growth. Liquid forms of the product are being preferred as they are soluble, even in cold water, thus, saving energy, and produce less waste when used. A healthy distribution network along with growing hygiene-awareness are also driving the growth of the industry in the region.

The report gives an in-depth look into the key players in the laundry detergents market in North America, covering their competitive landscape, capacity, and latest developments like plant turnarounds, expansions of capacity, and mergers, acquisitions, and investments:

The comprehensive report gives an overview of the other regional markets like the Asia Pacific, Latin America, Europe, and the Middle East and Africa. The report assesses the market based on Porter’s Five Forces model. A SWOT analysis has also been provided within the report.

EMR’s meticulous research methodology delves deep into the industry, covering the macro and micro aspects of the industry. Based on its types the laundry detergents industry in North America can be segmented into enzymatic and non-enzymatic segments with the enzymatic type accounting for the largest industry share of almost 90% in the North America market. Liquid detergents represent the largest segment in the regional market by form. On the basis of application, the household sector is the leading segment in the North America market. The major regional markets for laundry detergents in North America are the United States of America and Canada with the US accounting for the largest share of the market. The key players in the above industry include Henkel AG & Company, KGaA, Church & Dwight Co., Inc, S. C. Johnson & Son, Inc., Seventh Generation, Inc., Alticor Inc., The Clorox Company, and USA Detergents Manufacturing Inc., among others.

The major drivers of the market such as growing disposable incomes, increasing population, increasing hygiene consciousness, growing household sector, rising consumption of clothes, mounting industrial demand, and rising innovations are expected to aid the industry growth. EMR’s research methodology uses a combination of cutting-edge analytical tools and the expertise of their highly accomplished team, thus, providing their customers with market insights that are accurate, actionable, and help them remain ahead of their competition.

An electric mop is a sweeping machine on the ground that operates on electricity. It is an alternative to the typical method of sweeping and mopping. Electric mop consists of a pad for washing, a tank...
Read More

The Middle East and Africa household care market reached a value of nearly USD 7.8 billion in 2019 driven by the growth of the laundry detergent segment. Detergents represent the largest segment of th...
Read More

The Europe household care market, along with its professional cleaning and hygiene product industry, reached a total production value of approximately 30 USD billion in 2019. Germany is the major cons...
Read More