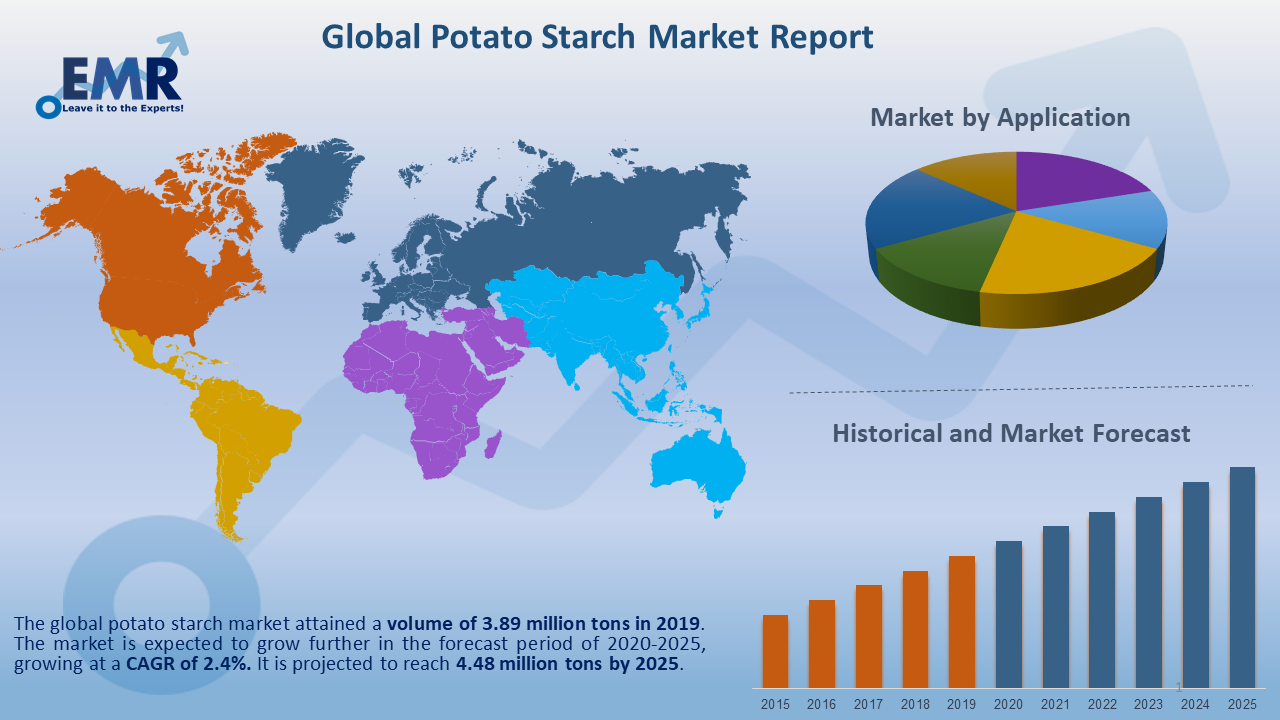 Potato starch derived from potatoes. Starch grains are contained within the cells of the root tubers, which are extracted by crushing the potatoes. The grains are subsequently washed and dried into a powder. The types of potato starch available in the market are:

They find extensive application in the food industry. Paper, textile, pharmaceuticals, and personal care are the other significant application sectors for the starch. The EMR report provides an overview of the regional markets like North America, Europe, Latin America, Middle East and Africa, and Asia Pacific.

The global potato starch market is being driven by the thriving food and beverage industry, especially in the emerging economies. It is used as thickener, gluing agent, bulking ingredient, water binder, and anti-caking ingredient, among others, in food segments like the meat industry, bakeries, confectionery, and dry blends. The rising disposable income and a growing middle-class population are also aiding the market growth with people consuming more convenient and processed foods. Potato starch is used in ready-to-eat products and mixes, such as baked goods, and dessert mixes. It is also being preferred due to its added health benefits like reducing the absorption of carcinogenic compounds, helping lower blood glucose levels, and increasing the absorption of minerals like magnesium and calcium.

EMR’s meticulous research methodology delves deep into the industry, covering the macro and micro aspects of the industry. Based on its product types the global potato starch market can be segmented into native, modified, and sweetener. On the basis of application, the food sector holds a significant share of the global market. The major regional markets that the report focuses on are are North America, Europe, Latim America, the Middle East and Africa, and the Asia Pacific, with Europe accounting for the largest share of the market. The key players in the report include Cargill, Incorporated, Ingredion Incorporated, Tereos S.A., Roquette Frères, The Cooperative Avebe U.A., Emsland Group, AGRANA Beteiligungs AG, VIMAL PPCE, and Novidon B.V.

The major drivers of the industry such as rising disposable incomes, growing population, increasing consumption of processed foods, and expanding applications in textiles and packaging industries are expected to aid the industry growth. EMR’s research methodology uses a combination of cutting-edge analytical tools and the expertise of their highly accomplished team, thus, providing their customers with market insights that are accurate, actionable, and help them remain ahead of their competition.

EMR’s approach gives their clients a comprehensive assessment of the prevailing and projected market conditions through the collection, collation, and analysis of data from trusted sources. The key questions answered in the report are:

The Asia Pacific confectionery market is being driven by the shift in consumer preferences owing to the rising disposable incomes and rapidly developing emerging economies within the region. The indus...

The rising health consciousness, coupled with the growing inclination of consumers towards a vegetarian and vegan lifestyle, is driving the growth of the global non-GMO food market. The rising expendi...

The industry is being aided by the increasingly fast-paced lifestyle of consumers and the rising consumption of processed foods globally. Globally, instant fried noodles are the most popular type of p...