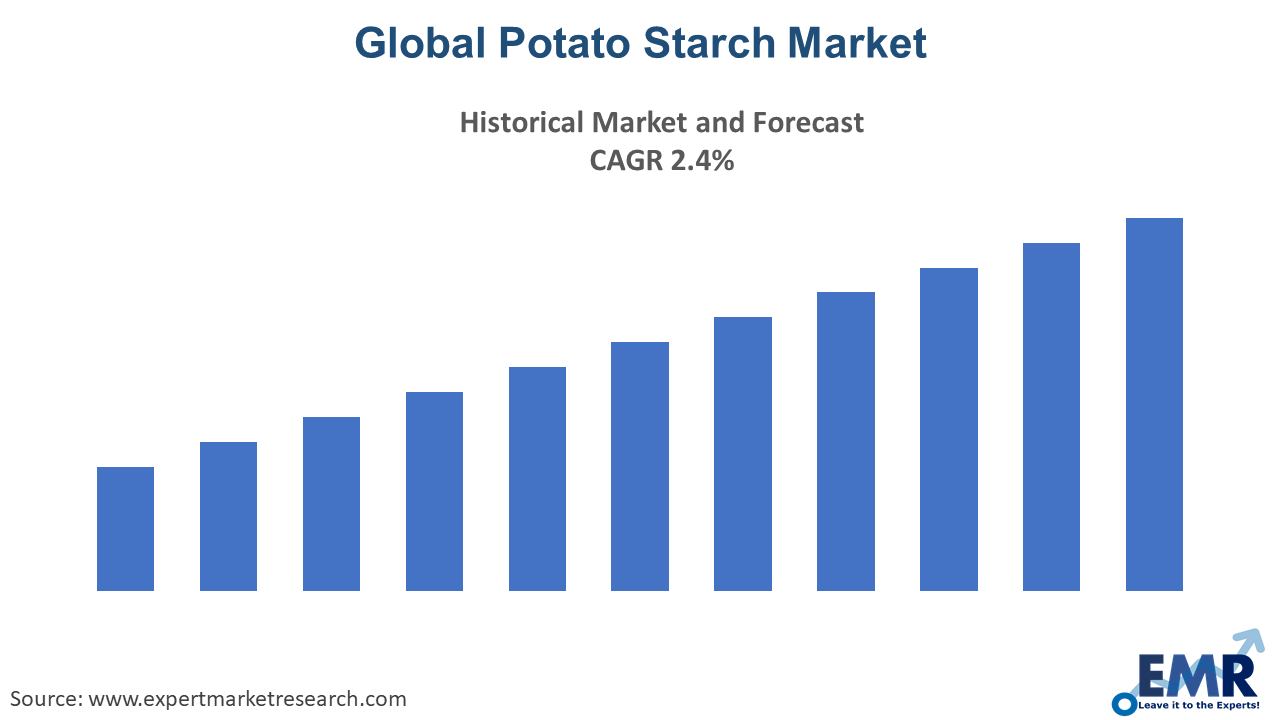 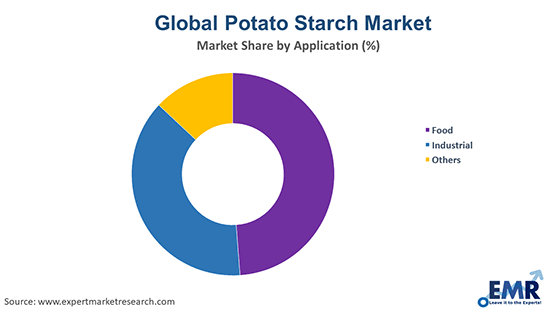 Potato starch derived from potatoes. Starch grains are contained within the cells of the root tubers, which are extracted by crushing the potatoes. The grains are subsequently washed and dried into a powder. The product categories of potato starch available in the market are:

They find extensive application in the food industry, followed by the industrial sector, among others. The EMR report provides an overview of the regional markets like North America, Europe, Latin America, Middle East and Africa, and Asia Pacific. 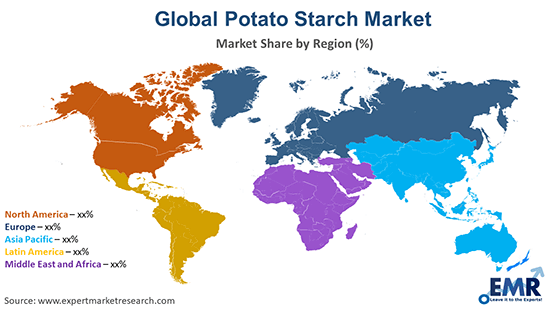 The global potato starch market is being driven by the thriving food and beverage industry, especially in the emerging economies. It is used as thickener, gluing agent, bulking ingredient, water binder, and anti-caking ingredient, among others, in food segments like the meat industry, bakeries, confectionery, and dry blends. The rising disposable income and a growing middle-class population are also aiding the potato starch market growth with people consuming more convenient and processed foods. Potato starch is used in ready-to-eat products and mixes, such as baked goods, and dessert mixes. It is also being preferred due to its added health benefits like reducing the absorption of carcinogenic compounds, helping lower blood glucose levels, and increasing the absorption of minerals like magnesium and calcium.

What was the global potato starch market size in 2020?

In 2020, the global potato starch market attained a volume of 3.4 million tons.

What is the growth rate of the potato starch market?

The major drivers of the industry such as rising disposable incomes, increasing population, thriving food and beverage industry, rising demand from the developing regions, expanding application in the textile industry, and growing technological advancements are expected to aid the market growth.

What are the key industry trends of the global potato starch market?

The key market trend guiding the growth of the potato starch market include the rising demand for various food products including ready to mix and ready to eat products, such as baked good, curry and dessert mixes.

What are the major regions of potato starch according to the market report?

What are the major product categories of potato starch in the industry?

Native, modified, and sweetener are the major product categories of potato starch type in the industry.

What is the leading application segment of potato starch?

Food industry is the major application segment in the industry.

The major players in the industry are Cargill, Incorporated, Tereos, Roquette Frères, Avebe, AGRANA Beteiligungs-AG, Emsland Group, and Novidon, among others.

The global potato starch market attained a volume of 3.4 million tons in 2020 driven by rising demand from the developing regions and expanding application in the textile industry. Aided by the rising demand for processed and ready-to-eat food, the market is expected to witness a further growth in the forecast period of 2022-2027, growing at a CAGR of 3.9%. The potato starch market is projected to reach a volume of 4.4 million tons by 2026.

EMR’s meticulous research methodology delves deep into the market, covering the macro and micro aspects of the industry. Based on its product categories, the industry can be segmented into native, modified, and sweetener. On the basis of application segments, the industry is divided into food and industrial sectors, among others. The major regional markets for potato starch are North America, Europe, the Asia Pacific, Latin America, and the Middle East and Africa, with Europe accounting for the largest share of the market. The key players in the above market include Cargill, Incorporated, Tereos, Roquette Frères, Avebe, AGRANA Beteiligungs-AG, Emsland Group, and Novidon, among others.

The global carotenoids market attained a value of about USD 1.8 billion in 2021, driven by the increasing demand for carotenoids in the cosmetics industry and animal feed industry. Aided by the rising...
Read More

The global culinary sauces market attained a value of USD 49.7 billion in 2021, driven by the changing customer preferences. Aided by the rising disposable incomes and an increase in the global popula...
Read More

The global fillings and toppings market was driven by the rising demand for baked food items in the historical period. Aided by the increase in the size of confectionery and bakery industries and chan...
Read More

The global xanthan gum market attained a value of USD 1080.69 million in 2021, driven by the thriving food and beverage industry and rapid urbanisation. Aided by the growing R&D activities, the market...
Read More

The global native corn starch market attained a value of nearly USD 5.78 billion in 2021, driven by the growing awareness regarding the health benefits of native corn starch. Aided by the increased re...
Read More