Global Sodium Acid Pyrophosphate Market to Grow at a CAGR of 4% During 2021-2026, Aided by the Growth in the Pet Food Industry

The global sodium acid pyrophosphate market is expected to grow in the forecast period of 2023-2028 at a CAGR of 4%.

The recent surge in the global food processing industry, along with the baked goods industry, has led to an increase in demand for sodium acid pyrophosphate. This is due to its application as a popular leavening agent found in baking powders and in baked goods. It is also commonly used as an ingredient in canned seafood to maintain colour and preservation.

The major portion of the industry’s growth is expected to come from the Asia Pacific region due to the rapid developments in the food and beverages industry in the region. This is further attributed supported by the increase in disposable incomes in the emerging economies of these regions.

Sodium acid pyrophosphate, also known as disodium pyrophosphate, is an inorganic compound that appears as a white, odourless powder. It is an ionic compound consisting of two sodium cations and one pyrophosphate anion, and is, hence, water-soluble. It is commonly produced by the thermal decomposition of sodium dihydrogen phosphate.

The classification of the market based on grade is:

The market can be broadly categorised on the basis of functionality into:

The market is segregated based on end use as:

The EMR report looks into the regional markets of sodium acid pyrophosphate like North America, Europe, the Asia Pacific, Latin America, and the Middle East and Africa. 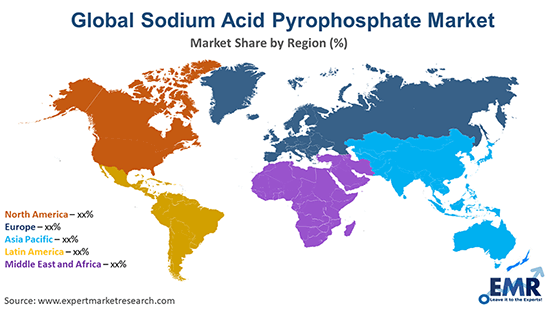 However, the market is predicted to be constrained by the increasing health and eco-consciousness, which is leading consumers to shift away from livestock goods. The rising preference for organic goods is also expected to impede growth, as these may not include sodium acid pyrophosphate.

The report presents a detailed analysis of the following key players in the global sodium acid pyrophosphate market, looking into their capacity, market shares, and latest developments like capacity expansions, plant turnarounds, and mergers and acquisitions:

What is the growth rate of the global sodium acid pyrophosphate market?

In the forecast period of 2023-2028, the global sodium acid pyrophosphate market is projected to grow at a CAGR of 4%.

The major drivers of the industry, such as the growing food processing industry, rising disposable incomes, rapid urbanisation, increasing demand for baked goods, and expansion in the livestock industry, are expected to aid the market growth.

What are the key industry trends of the global sodium acid pyrophosphate market?

The key trend in the sodium acid pyrophosphate industry is the surge in the pharmaceuticals industry.

What are the major regional markets of sodium acid pyrophosphate, according to the EMR report?

What are the major grades of sodium acid pyrophosphate in the market?

The major grades of sodium acid pyrophosphate are food grade and industrial grade.

How is the market classified based on functionality?

The sodium pyrophosphate acid market is classified as buffer, leavening agent, emulsifier, stabilizer, and adhesive, among others based on functionality.

What are the significant end uses of sodium acid pyrophosphate?

The significant end uses of the product include food and beverages, pet food, leather, pharmaceutical, and petroleum, among others.

The global sodium acid pyrophosphate market is being driven by the food processing industry. Aided by the growth of the livestock industry, the market is expected to witness a moderate growth in the forecast period of 2023-2028, growing at a CAGR of 4%.

EMR’s meticulous research methodology delves deep into the market, covering the macro and micro aspects of the industry. Based on its grades, the market can be segmented into food grade and industrial grade. On the basis of functionality, the market is segmented as buffer, leavening agent, emulsifier, stabilizer, adhesive, and others. The major end uses of the market are food and beverages, pet food, leather, pharmaceuticals, petroleum, and others. The major regional markets for sodium acid pyrophosphate include North America, Europe, the Asia Pacific, Latin America, and the Middle East and Africa. The key players in the above market include Israel Chemicals Ltd., Jiangsu Sunrise Biotech Co. Ltd., Shubhchem Industries, Sichuan Blue Sword Chemical (Group) Co., Ltd., Nippon Chemical Industrial Co., Ltd., and others.