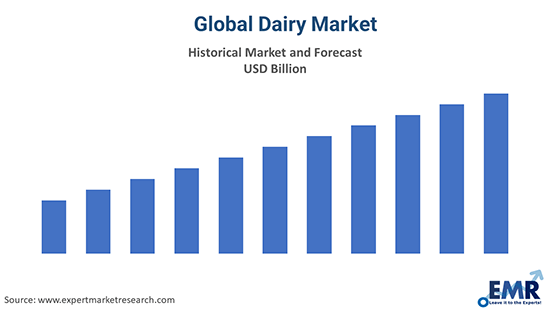 Asia Pacific and Western Europe are the leading markets globally. The global dairy market is affected by the climate of the Asia dairy markets. The dairy consumption has been on a rise in Asia over the years due to a growing population, expanding middle class, and an increase in liberalised trade deals. China and India are the leading producers in the region. Japan, Indonesia, Malaysia, and Philippines are the other significant markets in the region.

The dairy export from key markets like EU, US, New Zealand, Australia, Argentina, and Uruguay increased by nearly 5.2% in volume in March 2018, as compared to Q1 of 2017, attaining 11,600,000 tonnes. The exports also saw a substantial growth in value, growing by 15.3% from 2017 to the initial half of 2018, reaching 11,600,000 tonnes. The dairy exports value in these countries were aided by the increase in the prices of major dairy commodities in 2018. With the imposition of retaliatory tariffs by China on US products, the exports of milk powder, whey, lactose, cheese and butterfat decreased by 47% in October 2018, while US exports rose by 14%. Southeast Asia and Mexico were especially lucrative markets for US dairy exports in 2018.

The global dairy market was aided by the growing milk market whose output reached nearly 827 million tons in 2018, witnessing a 2% growth from 2017.  Cheese is one of the leading products globally. In 2018, the global cheese trade saw a slight increase of 1.2% from 2017, reaching 2.6 million tons.

Dairy and its products include drinking milk ranging from whole to semi-skimmed to skimmed milk, and also includes products made of milk like butter, cheese, yoghurt, milk powder, and ice cream, among others. Dairy makes up an essential part of the daily nutritious diet as it contains nutrients like Vitamin A, vitamin B, vitamin B12, calcium, protein, riboflavin, and other essential minerals. Cow’s milk is one of the most popular products globally and contains 3.2 grams of proteins per serving of 100 millilitres.  Milk, yoghurt, and cheese are especially rich in vitamin. Dairy has various health benefits like the strengthening of bones.

The major products available in the market are:

Cheese is a popular dairy product globally while drinking milk remains the leading dairy product that is extensively consumed the world over. While dairy and its products find the majority of their application in the food and beverage sector, they also find applications in related industries like sports nutrition, medical nutrition, and infant formula. 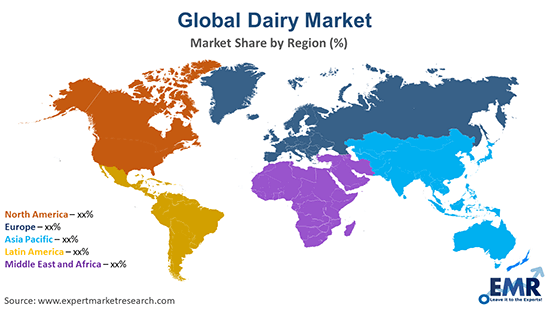 The US was one of the leading markets globally in 2020. In 2019, dairy production in the country increased by 1.4% as compared to the previous year. The US also led the market as the largest cheese producer in 2020.

Globally, there has been a rising trend for the production of dairy and its products. The surplus of dairy production is alleviated by a growing demand for milk and cheese from countries like China. China is a growing market for dairy, driven by an increasing population and rising demand locally. The US dairy exports to China increased by almost a quarter in 2017 as compared to 2016. While the Chinese production of dairy saw a downward trend since 2016, dairy production in China is expected to grow significantly in the coming few years.  Belarus, Canada, Iran, and Turkey are emerging markets for dairy exports. Australia is a leading exporter and exports over half of the dairy and its products it produces.

The European Union led the market in 2018 in terms of the total cow milk production, which attained a volume of 154.8 million metric tons. It was followed by the United States and India as leading milk producers. The EU consumes almost 45 million metric tons of dairy products annually and has more than 300 cheese and dairy products. In Germany, specifically, the dairy industry was one of the most significant segments in the food and beverage industry, only second to the meat and meat products segment in 2017.

Products like soft cheese, yoghurt, milk protein, and flavoured milk are seeing growth due to increasing health consciousness among the consumers, and thus driving the global dairy market. In Germany, consumers are using soft cheese as an alternative to meats.

The global dairy prices saw an increase throughout 2017 due to a decline in milk production in late 2016 and early 2017. Butter prices witnessed an impressive growth in 2017, growing at an average of 65% higher than 2016. While the butter witnessed a decline in 2018, they still remained comparatively higher than in recent years. The prices of milk powder, on the other hand, increased in 2018. The report provides the regional price trends of dairy for the periods 2017-2021 and 2022-2027.

The report provides an analysis of the following key players in the global dairy market, looking into their market share, capacity, and latest developments like capacity expansions, mergers and acquisitions, and plant turnarounds:

EMR’s comprehensive report provides an in-depth look into the global dairy market and offers a SWOT analysis of the market along with analysing Porter’s five forces.

What are the major global dairy market drivers?

The major drivers of the global dairy market, such as rising global populations, rising demand for dairy products, changing dietary habits, rapid urbanisation, and increasing incomes, are expected to aid the market growth.

What are the key industry trends of the global dairy market?

The key market trend guiding the growth of the market includes the rising dairy consumption from the emerging economies.

What are the major regions of dairy, according to the market report?

What are the major products within the dairy market?

Who are the key players in the dairy market, according to the report?

The global dairy market is being driven by rising global populations. Aided by the technological advancements, the market is expected to witness a moderate growth in the forecast period of 2022-2027.

The global toned milk market is driven by the increasing disposable income and growing adoption of healthy lifestyles by the young population. Aided by the growing demand for flavoured toned milk owin...
Read More

The global cheese powder market was driven by the rapidly growing fast-food industry in the historical period. Aided by the increasing demand for convenience foods and changing dietary preferences of ...
Read More

The global dairy-free ice creams market attained a value of nearly USD 664 million in 2021, driven by the growing inclination towards plant-based desserts and convenience foods. Aided by the prevalenc...
Read More

The global halloumi cheese market attained a value of more than USD 454.7 million in 2021, driven by the rapid globalisation of culinary practices. Aided by the growing use of halloumi cheese in ready...
Read More