The global tyre market is being driven by the rising demand of the product across the world. In 2017, China was the leading tyre market accounting for almost 49% of the global tyre industry. China was followed by Europe, United States, India, and Japan as some of the significant tyre markets in the world. China’ s market is aided by its robustly growing car industry. It is one of the largest car markets increasing its share by almost 21% since 2007 and accounted for 30% of the global car industry in 2016. A strong GDP growth and a growing demand for cars in the emerging middle class along with a tax break implemented for cars with smaller engines are driving the increase in car production in China.

Tyre is a thick ring of rubber that is usually inflated and placed over the outer edge or the rim of the vehicle wheel. It provides traction and allows the vehicle to travel over the road more easily. While most tyres are made of natural rubber, tyres have also started to incorporate materials like synthetic rubber, steel wires, fabric, and carbon black. 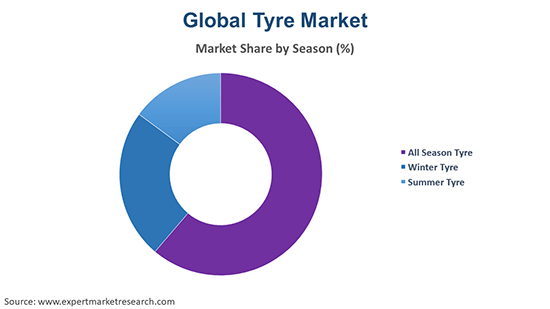 The tyre market is bifurcated on the basis of design into:

The industry is bifurcated on the basis of end use into:

The industry is divided on the basis of vehicle type into:

On the basis of distribution channel, the industry is bifurcated into:

On the basis of season, the industry is divided into:

The EMR report analyses the tyre industry in North America, Europe, Latin America, the Middle East and Africa, and the Asia Pacific.

The global tyre market is being driven by the expansion in the global production and sales of vehicles. Rising incomes in emerging economies will lead to an increase in the number of vehicles in use, thus, spurring the growth of the tyre industry. The growing middle class in countries undergoing industrialisation will also aid the tyre market with an increasing vehicle ownership leading to the rising demand for light-weight vehicles tyres. There has been a rise in the production of tyres due to the declining prices of rubber. The replacement tyre industry, in particular, is estimated to see healthy growth in the coming years due to higher profit margins.

Segment-wise, the global tyre market was led by the OEM (original equipment manufacturer) tyres, which accounted for more than half of the market in 2018. Globally, tyres find their maximum utility in passenger cars and light trucks. Passenger car/light trucks were followed by applications in commercial vehicles like trucks and off-highway vehicles.

The rising demand in the Asia market is projected to drive the tyre industry in the coming year. The Asia tyre industry is not just being driven by the increase in the automobile industry but also by the reduced cost of production. The reduced production costs are due to the lower labour costs and lesser natural rubber content (with more synthetic rubber content) in tyres. With rising automotive production in Latin America and Middle East regions, it is expected to witness robust growth in the two regions.

The report gives a detailed analysis of the following key players in the global tyre market, looking into their capacity, and latest developments like mergers and acquisitions, plant turnarounds, and capacity expansions:

The EMR report provides a SWOT analysis as well as an analysis of Porter’s Five Forces.

What was the global tyre market size in 2020?

The major drivers of the industry such as rising disposable incomes, increasing population, globalisation and industrialisation, rising demand from the developing regions, and growing technological advancements are expected to aid the market growth.

What are the key industry trends of the global tyre market?

The key market trend guiding the growth of the tyre market include the rising automotive production globally.

What are the major regions of tyre according to the market report?

What are the major design segments of the product in the industry?

Radial and bias are the major design segments of the product in the industry.

What are the major end uses of tyre in the industry?

OEM and replacement are the major end uses of the product in the industry.

What are the significant vehicle types of tyre market?

What are the major distribution channels of tyre market?

Online and offline are the major distribution channels of industry.

What are the significant seasons of tyre market?

All season, winter, and summer tyres are the significant seasons of industry.

The global tyre market attained a volume of 3378.96 million units in 2020 driven by growing demand from the developing regions and rising technological advancements. The market is expected to witness a further growth in the forecast period of 2022-2027, growing at a CAGR of 4%. The tyre market is projected to reach 4111.02 million units by 2026.

EMR’s meticulous research methodology delves deep into the market, covering the macro and micro aspects of the industry. Based on its end uses, the global tyre market can be segmented into OEM and replacement. Based on design, the industry is divided into radial and bias. On the basis of vehicle type, the industry is divided into passenger car, light commercial vehicle, medium and heavy commercial vehicle, two wheelers, three wheelers, and off-the-road. Based on distribution channel, the industry is segmented into online and offline. On the basis of seasons, the industry is divided into all season, winter, and summer tyre. The major regional markets for tyres are North America, Europe, the Asia Pacific, Latin America, and the Middle East and Africa. The key players in the above market include Michelin Group, Goodyear Tire & Rubber Company, Bridgestone Corporation, Pirelli & C. S.P.A, Sumitomo Rubber Industries, Ltd., Continental Corporation, Hankook Tire & Technology Co.,Ltd, and others.

The global automotive emission sensors market is predicted to grow at a CAGR of 14.20% in 2022-2027. North America has a strong base in the global market, and Asia Pacific has been witnessing rapid gr...
Read More

The global chemical tankers market reached a value of about USD 33.2 billion in 2021, driven by the various properties of these tanks favouring the transportation of harmful and sensitive chemicals, a...
Read More

The global helideck monitoring system market attained a value of USD 415 million in 2021, driven by the increasing number of commercial vessels and ships. Aided by the growing defence and commercial n...
Read More

The global helicopter services market was driven by the rising demand for helicopter emergency medical services in the historical period. Aided by the increasing investment by private hospitals and th...
Read More

The global ceramic brakes market is driven by advancements in brake technologies and the rising preference for vehicles with enhanced performance and high-quality materials. Aided by the growing deman...
Read More