The rising per capita incomes in emerging economies are driving the global vegetable oil market. The consumption is expected to see an annual growth of 1% in the forecast period. The per capita level of food products containing vegetable oil in emerging nations is expected to match those of the developed economies, growing 0.4% annually in the forecast period. This projected growth in its consumption will be fulfilled by the expansion of oilseed cultivation and an increase of imports, especially palm oil, from Indonesia and Malaysia. India, the second largest consumer, just behind China, will witness a higher consumption growth of 3.1% per annum of vegetable oil-based food. 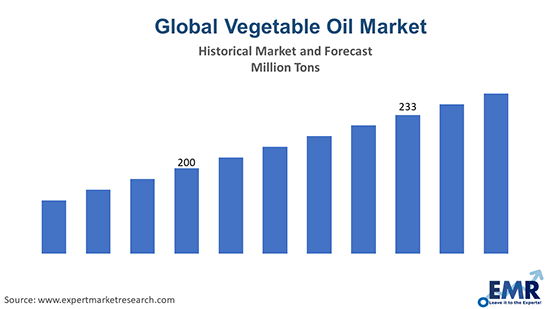 Indonesia and Malaysia are the leading markets and are projected to witness an annual growth of 1.8% and 1.4% respectively in the coming years. Both countries are also the leading exporters. Majority of the output produced by Indonesia and Malaysia are exported with Indonesia exporting almost 70% of its vegetable oil and Malaysia exporting over 80% of its total production. However, the exports from these two significant markets are expected to see a slight decline due to rising domestic demand for use in the food and biofuels sectors. Indonesia and Malaysia will continue to dominate the exports even after the expected decline. Indonesia and Malaysia are followed by Argentina, which also exports over two-thirds of the vegetable oil produced domestically.  India, on the other hand, is the leading importer of and is expected to account for more than a quarter of the global imports in the forecast period, with its annual imports growing by 4.7% per annum. Among the production of agricultural commodities, it holds the majority of the trade share with 41% and is projected to continue its domination in the coming years.

Vegetable oils are obtained from natural sources like seeds, nuts, and fruits. They find expansive applications in sectors ranging from food to household and personal care sectors. They are a rich nutrient source and are used for cooking and as an ingredient in margarine, non-dairy creamers, and ice-cream. They are also used as a replacement for animal fats. For non-food applications, it used in the production of soaps, detergents, lubricants, greases, and candles. Biofuel, too, is emerging as a significant application sector. 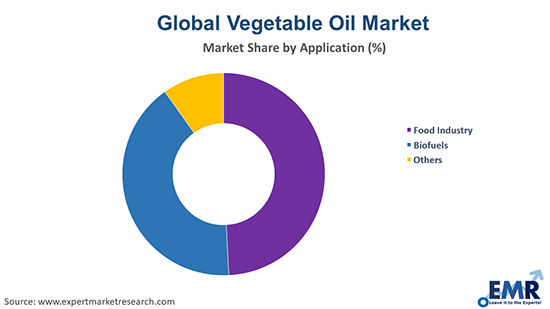 The types of oil include the following:

It finds wide applications in the following: 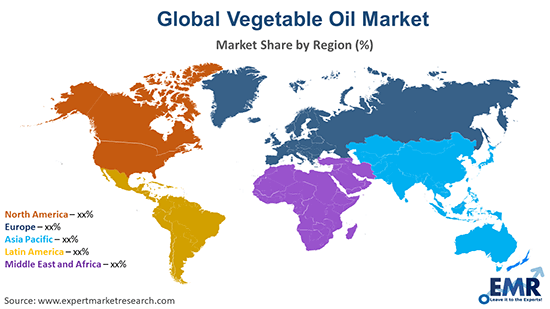 The increasing use in food applications, especially in emerging countries, aided the global market growth. The global vegetable oil market is being driven by its increasing consumption in emerging economies like China and India. The rise in consumption in these economies is a result of the growing population, changing diets, and higher standards of living. The rising demand for its imports has provided further impetus to the market.

Palm oil is the leading type in the market and is produced mainly in Indonesia and Malaysia. In Indonesia, palm oil production is expected to witness an annual growth of 1.8% in the forecast period. Additionally, palm oil will see significant growth in countries like Thailand, Columbia, and Nigeria.

The production in the world depends upon the production of perennial tropical oil plants like oil palm and the crush of oilseeds. Indonesia and Malaysia account for over one-third of the total production, with Indonesia as the leading producer globally.

Over half the total product being produced globally is being derived by the crushing of soybeans and other oilseeds. Its application as a feedstock of biodiesel has tapered down in recent years as compared to the last decade when biofuel policies were being introduced. However, it is still expected to witness an annual growth of 0.3% annually in the coming five years. The decrease use in biodiesel production in the United States and European Union is offset by its increasing use in this sector by emerging nations like Argentina.

The report gives a detailed analysis of the following key players in the global vegetable oil market, covering their competitive landscape, capacity, and latest developments like mergers, acquisitions, and investments, expansions of capacity, and plant turnarounds:

What was the global vegetable oil market size in 2021?

The market is expected to witness healthy growth in the forecast period, reaching a value of 248.44 MMT by 2027.

The major drivers of the industry include rising disposable incomes, increasing population, changing diets, increasing demand for its imports, and higher standards of living.

What are the key industry trends of the global vegetable oil market?

The increasing demand for biodiesel is expected to be a key trend guiding the growth of the industry.

Palm oil is the dominant type of the product in the industry.

Which are the major application sectors for the industry?

The major application sectors include food industry and biofuels, among others.

The global vegetable oil market reached a volume of 206.86 MMT in 2021 driven by the rising consumption in developing economies. Aided by the growing biofuels demand, the market is projected to grow at a CAGR of nearly 3.10% in the forecast period of 2023-2028 to attain a volume of 248.44 MMT by 2027.

EMR’s meticulous research methodology delves deep into the industry, covering the macro and micro aspects of the industry. Based on its types, the global vegetable oil market can be segmented into palm, soybean, canola, sunflower, coconut, and palm kernel, among others, with palm oil accounting for the largest market share. On the basis of application, the industry can be divided into food industry and biofuels, among others. The major regional markets are North America, Europe, the Asia Pacific, Latin America, and the Middle East and Africa, with Asia Pacific accounting for the largest share of the market. The key players in the above industry include Bunge Limited, ADM, Cargill, Incorporated, Wilmar International Ltd., and Louis Dreyfus Company, among others.