Latin America Vegetable Oil Market Aided by the Increased Global Production of Oilseeds, Forecast to Attain 605 Million Tonnes between 2021 and 2026.

The Latin America vegetable oil market is aided by the rising production of oilseed in countries like Argentina and Brazil. By 2027, Argentina is expected to account for about 11% of the global oilseed crush while Brazil’s share will stand at approximately 10%. 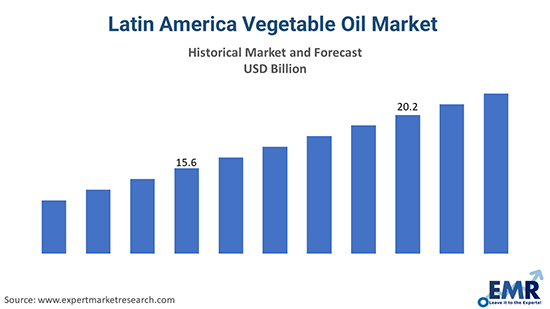 Globally, vegetable oil is a significant agricultural commodity having one of the highest trade shares whose trade shares account for 42% of the all agricultural commodities produced globally. Its global output is expected to increase annually by 1.7% in the forecast period of 2021-2026. It is derived by crushing soybeans and other oilseeds which account for nearly 55% of all production.  Oil palm is a major vegetable oil source with palm oil accounting for 35% of its output globally. Palm kernel, coconut, and cottonseed oil are other significant types available in the global market.

Soybean oil leads the market in Latin America with Brazil, Argentina, and Paraguay producing 117 million tons, 55 million tons, and 9.5 million tons of soybean, respectively. The soybean production is projected to witness a healthy growth in the forecast period of 2021-2026. Between 2017-2018, Brazil produced nearly 8,200 thousand metric tons of soybean oil.

The Latin America region is also a major exporter with the Americas dominating the exports of soybean, and other oilseeds, along with protein meals. Argentina, in particular, is a leading exporter in the region and is the third largest exporter worldwide. It is expected to account for nearly 9% of the global exports by 2026.

Vegetables oils are extracted by applying pressure on natural plant sources like seeds, nuts and fruits. They are widely used for cooking and contain nutrients like vitamin E, omega-3 and omega-6 fatty acids, and polyunsaturated, monounsaturated, and saturated fats. They are also a constituent part of food products like margarine, ice cream and non-dairy creamers. They also find applications in home and personal care sector as a part of soaps, detergents, cosmetics, and other products. They are also increasingly finding use as an alternative to fossil fuels as feedstock for biofuel. 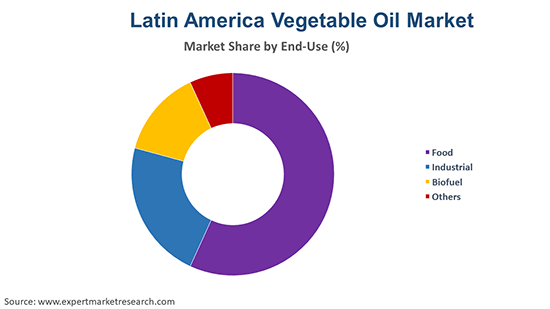 Their leading end-use sectors are:

Colombia, Argentina, and Brazil, among others, are the major regions considered in the report.

Globally, the growth of the vegetable oil production is dependent on the crush of oilseed, and the production of perennial tropical oil plants. Their consumption is projected to be driven by the rising demand in developing countries for food applications due to the growing population. With a growing health awareness, consumers are increasingly demanding vegetable oil because of their health benefits. Palm oil is being used as an alternative to trans-fat, thus, driving the growth of the market.

The Latin America vegetable oil market is being driven by the rising demand of the product as a biodiesel feedstock. Globally, 17% of all vegetable oil produced is used in the production of biodiesel with Brazil using 40% of it as a biodiesel feedstock. Argentina utilizes 74% of its production of biodiesel. This percentage is projected to increase in the coming years. Its consumption by Argentina’s biodiesel industry is expected to attain 2.5 million tonnes by 2026, which would account for 75% of the total consumption in the country.

Soybean is a major feedstock for vegetable oil in the Latin America region. The production of soybean in Brazil is expected to reach 130 million tonnes in 2027. The Brazil soybean market is projected to grow annually by 1.3% in the forecast period. Argentina and Paraguay are other significant soybean producing countries in Latin America, which are expected to grow in the coming years.

The report analyses the following key players in the Latin America vegetable oil market, looking into their market share, capacity, and latest developments like mergers and acquisitions, capacity expansions, and plant turnarounds:

The EMR report gives an in-depth insight into the Latin America vegetable oil market, providing a SWOT analysis as well as an analysis of Porter’s five forces.

The Brazil palm oil market attained a value of USD 938.4 million in 2020, driven by the growing awareness regarding the health benefits of palm oil. Aided by the rising demand for palm kernel oil, the...
Read More

The global vegetable oil market reached a production volume of 213.93 million tons in 2020. The market is projected to grow at a CAGR of nearly 3% in the forecast period of 2021-2026 to attain a produ...
Read More