The global visual effects (VFX) market attained a value of USD 26.64 billion in 2020. The market is further expected to grow in the forecast period of 2023-2028 at a CAGR of 11% to reach almost USD 49.83 million by 2026. The global market is being led by North America, majorly being driven by the increasing use of VFX in Hollywood movies. 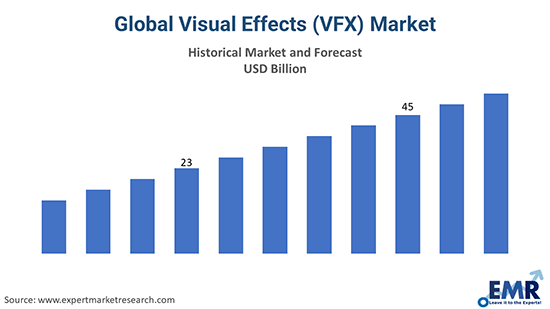 Visual effects or VFX refer to special effects that deeply reflect the story’s visual representation and are used in films in one way or another almost since the earliest films. Since then, visual effects have often been used and not only for special effects. Many films used matte paintings to create ceilings that did not exist on the sets. Visual effects have evolved in order to deliver sights that cannot literally be filmed. This procedure involves the incorporation of live-action footage as well as the imagery created to create realistic scenes. VFX with CGI is widely used to produce movies, commercials, games, and television shows.

On the basis of the component, the visual effects (VFX) market can be divided into:

The technology can be divided into the following:

The visual effects (VFX) market can be broadly categorised based on its applications into:

The EMR report looks into the regional markets of visual effects (VFX) like North America, Latin America, Europe, the Middle East and Africa, and the Asia Pacific. 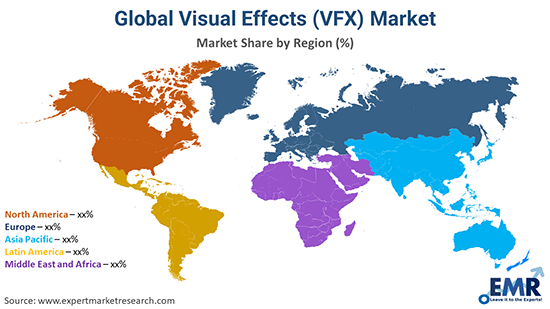 One of the main factors driving the rise of the global VFX market is the growing demand for high-quality content. With the increasing use of digital video streaming outlets like Amazon Prime Video, Netflix and Hulu, high-quality content and VFX are becoming more important. Smart devices like smartphones, tablets, laptops, and HD TVs are increasingly being used to promote the development of digital video streaming services. Many video services and studios utilize VFX in films and TV shows. Moreover, studios are stiffly competitive with providers of video streaming services by designing high-quality feature content, such as VFX. Consumers who are increasingly looking for high-definition (HD) VFX experiences will have huge business opportunities in the VFX market in the next few years.

One of the main factors leading to the development of the worldwide VFX development is the introduction of augmented reality (AR). The increasing demand for digital content creates a need for innovation in visual effects for new experiences like AR. In addition, film production units integrate AR in ongoing cameras to identify problems with VFX shots and to speed up the post-production process. The integrated AR cameras provide previews for filmmakers in order to identify the best scene. Due to the growing potential of AR in the media and entertainment industries, the increasing number of visual effects service providers are taking AR. Movies are majorly dominating the application sector.

The report presents a detailed analysis of the following key players in the global visual effects (VFX) market, looking into their capacity, competitive landscape, and latest developments like capacity expansions, plant turnarounds, and mergers and acquisitions:

What was the global visual effects (VFX) market size in 2020?

The rising demand for high-quality content, growing use of smart devices, growing potential of AR in the media and entertainment industries, and increasing use of VFX in Hollywood movies are propelling the market growth.

What are the key industry trends of the global visual effects (VFX) market?

The key trends propelling the market include the introduction of augmented reality (AR) and increasing use of digital video streaming outlets like Amazon Prime Video and Netflix.

What are the major regional markets of the global visual effects (VFX) market, according to the EMR report?

The major regions in the industry are North America, Latin America, Europe, Middle East and Africa, and the Asia Pacific with North America accounting for the largest share in the market.

Software, services, and hardware are the major components in the market.

What is the dominant application in the industry?

What are the leading technologies of the global visual effects (VFX) market?

AI and AR are the leading technologies of the market.

The major players in the industry are Cinesite VFX Ltd., Digital Domain Holdings Ltd., Framestore Ltd., Rodeo FX, Inc., and The Walt Disney Co. , among others.

The global visual effects (VFX) market attained a value of USD 26.64 billion in 2020, driven by the rising demand for high-quality content. Aided by the growing technological advancements like the introduction of augmented reality (AR) and increasing use of digital video streaming outlets, the market is expected to witness a further growth in the forecast period of 2023-2028, growing at a CAGR of 11%.

EMR’s meticulous research methodology delves deep into the market, covering the macro and micro aspects of the industry. Based on its components, the global visual effects (VFX) industry can be segmented into software, services, and hardware. By technology, the market can be divided into AI and AR. On the basis of applications, the movies sector accounts for the leading share in the industry. The major regional markets for global visual effects (VFX) market are North America, Latin America, Europe, Middle East and Africa, and the Asia Pacific, with North America accounting for the largest share of the market. The key players in the above market include Cinesite VFX Ltd., Digital Domain Holdings Ltd., Framestore Ltd., Rodeo FX, Inc., and The Walt Disney Co. , among others.