The global wheat market reached a consumption volume of around 734.7 million metric tons in 2020. The consumption is expected to grow at a CAGR of 2.7% in the forecast period of 2023-2028. 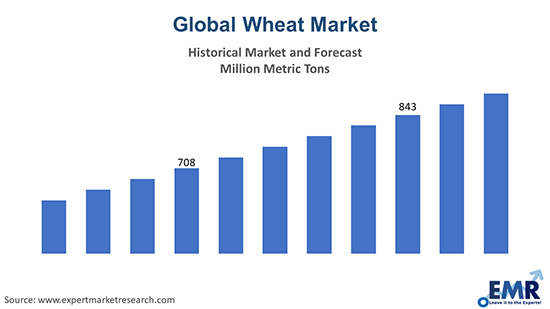 China, India, and Russia Leading the Market in Terms of Wheat Production

The global wheat market is being aided by the growing wheat starch market, which reached a volume of around 5 million metric tons in 2020. The starch market is likely to witness a steady growth in the coming years, which is expected to further propel the demand for wheat. The major wheat starch producing regions are France, the United States, the Netherlands, the United Kingdom, Australia, Belgium, Canada, China, and Japan.

Wheat is an essential type of cereal cultivated in temperate regions, the grain of which is crushed to produce flour for making products like bread, pasta, and pastry, among others. Wheat is cultivated in a larger area when compared to other crops and is also a major source of carbohydrates. In addition, it is rich in major nutrients like protein, dietary fibre, manganese, phosphorus, and vitamin B. 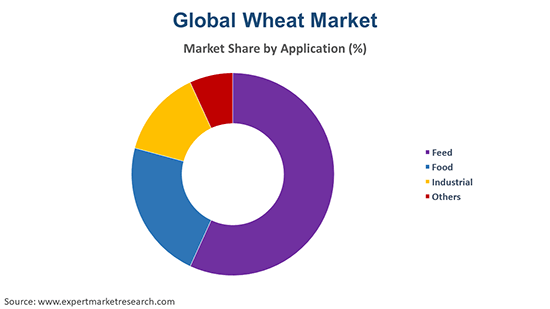 The market for wheat, based on type, is divided into:

Hard red winter (HRW) is the leading type of the crop, accounting for 40% of the total production. It is commonly used in the production of bread.

The EMR report also covers the regional markets of wheat like North America, Europe, the Asia Pacific, Latin America, and the Middle East and Africa. 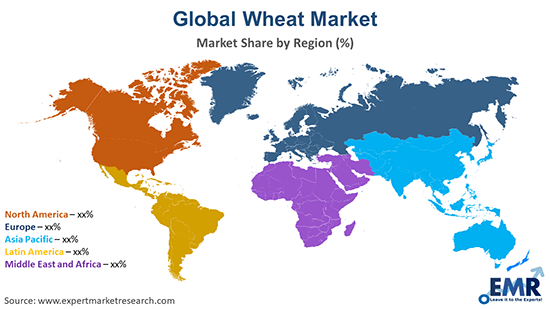 Growing Food Demands to Drive the Market Growth of Wheat

The global wheat market is being driven by the demand from the food sector, which is rapidly growing across all the regions with the increasing disposable income of the population, especially in the developing nations like India and China. With globalisation, the prevalence of processed food has seen a faster growth and, thus, is driving the demand for wheat. The crop is a staple food product in many regions, especially in India, among other Asian countries.

The growing demand for the product is being aided by the rapidly rising population, which has an increasing demand for both wheat and its starch. The global wheat market is being driven by the growing starch market. The demand for wheat starch has been witnessing a healthy growth since many years and the growth is likely to be more in the coming years, owing to the increasing popularity of processed food. Wheat starch is also in demand among health-conscious people due to the product being gluten-free and low in calorie-content. Additionally, wheat also provides protein, vitamin B, dietary fibre, and phytochemicals. The increasing demand for personal care products including dry shampoo, cleansers, and lotions, is further pushing the wheat starch market, and thus, driving the overall wheat market growth.

The growing demand for animal feed is also providing an impetus to the market. The demand for processed flour is also rising due to the growing food and beverage sector. The increasing utilisation of wheat in the production of processed foods owing to its unique viscoelastic and adhesive properties is likely to aid the market.

The increasing import and export of wheat are accelerating the market development. Also, the government initiatives to boost the production of wheat in order to make the country self-sufficient and improve food security are resulting in the market expansion. For instance, the National Food Security Mission (NFSM) in India aims to increase the production of wheat and other food grains through productivity enhancement and soil fertility restoration. The efforts taken to provide novel and improved crop production technologies and the distribution of high yielding varieties/hybrid seeds are expected to augment the market growth over the forecast period.

Key Players in the Global Market for Wheat

The report gives a detailed analysis of the following key players in the global wheat market, covering their competitive landscape, capacity, and latest developments like mergers, acquisitions, and investments, expansions of capacity, and plant turnarounds:

What was the global wheat starch market size in 2020?

The global wheat starch market reached a volume of 6.3 million tons in 2020.

The market is estimated to reach a volume of 6.7 million tons by 2026.

The major drivers of the industry include the rising disposable incomes, increasing population, and rising demand for low-calorie sweeteners and gluten-free food.

The overall rise in starch production and consumption is expected to be a key trend guiding the growth of the industry.

North America, Europe, the Asia Pacific, Latin America, and the Middle East and Africa are the leading regions in the market, with Europe accounting for the largest market share.

What are the major types in the industry?

The major types of the product include native starch and modified starch.

What are the major end-use sectors for the industry?

The end-use sectors include sweeteners, fuel, paper and textiles, and food, among others.

The leading players in the global wheat starch market are Cargill Incorporated, ADM, Roquette Freres, Tereos, AGRANA Beteiligungs-AG, and Tate and Lyle, among others.

EMR’s meticulous research methodology delves deep into the industry, covering the macro and micro aspects of the industry. Based on types, the global wheat market can be segmented into hard red winter (HRW), hard red spring (HRS), soft red winter (SRW), white wheat, and durum wheat, with hard red winter (HRW) leading the market with a 40% market share. On the basis of application, the industry can be divided into feed, food, and industrial, with food and industrial sectors dominating the application sectors. North America, Latin America, Europe, the Middle East and Africa, Europe, and the Asia Pacific are the major regions in the wheat market.

The major drivers of the industry such as rising disposable incomes, increasing population, rising urbanisation, growing demand for starch-based food, rising middle class population, and growing food industry are driving the growth of the industry globally. EMR’s research methodology uses a combination of cutting-edge analytical tools and the expertise of their highly accomplished team, thus, providing their customers with industry insights that are accurate, actionable, and help them remain ahead of their competition.