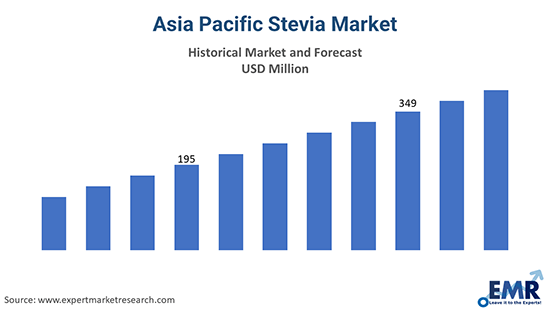 China is a leading producer of stevia globally. The country accounts for over 90% of the stevia output in the Asia Pacific region. China is a major supplier and exporter of crude stevia sweeteners, exporting to countries like the US, Malaysia, Japan, Korea, and Mexico. The natural sweetener is witnessing a rising acceptance and demand in the Asia Pacific, especially in Japan, China, and South Korea, where the sweetener has been in use for a substantial period. Japan is emerging as a major consumer of the natural sweetener in the region. Stevia, currently, occupies almost 40% of Japan’s sweeteners industry. In China, the demand for stevia has not just been growing from the overseas markets but also from the domestic market. Thus, major manufacturers are investing more in expanding the production of the sweetener in China along with the rest of the region.

The Asia Pacific is also a leading consumer of the natural sweetener, accounting for over 40% of its global consumption. The region is followed by Europe as a leading consumer, representing about a fifth of the global consumption of the natural sweetener. The two areas are expected to witness a year-on-year acceleration in their stevia consumption in the forecast period. The markets in the two regions are being driven by the growing acceptance of the substance by both the consumers and manufacturers. The Asia Pacific and Europe accounted for the largest number of food and beverage launches, which were comprised of stevia as an ingredient.

Stevia is a zero-calorie natural sweetener deriving its sweetness from its active compounds, steviol glycosides, which have 30-150 times the sweetness of sugar. It is available as leaves, powder, and liquid extract. It finds extensive application in the following sectors: 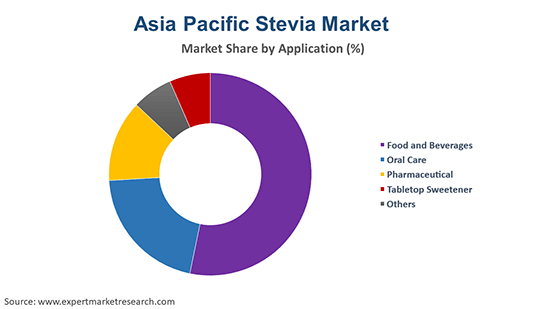 The report by EMR gives an in-depth analysis of the regional markets in the China, Japan, India, ASEAN, Australia, among others. 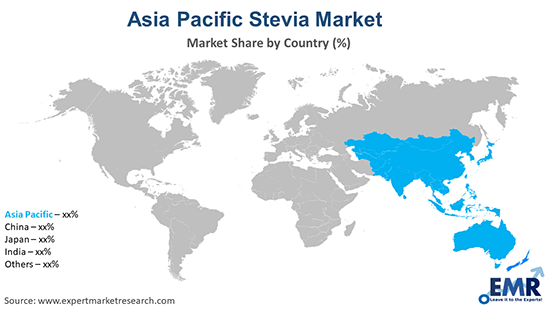 The Asia Pacific stevia market is being driven by the rising health awareness among the consumers due to the growing incidences of obesity and diabetes in the region. The region has the largest population of overweight and obese people with two out of every five adults being either overweight or obese. China and India, on the other hand, have the largest number of diabetes cases in the world. India has nearly 62 million diabetic patients with the number projected to rise to 75 million by 2026. With a growing awareness about these diseases, people in the region are increasingly seeking out sugar-substitutes. With a growing aversion to artificial products, consumers are also seeking out natural products like stevia over artificial sweeteners.

The Asia Pacific stevia market is being propelled forward by the growing population combined with a rise in urbanisation. With busier lifestyles and increasing spending powers, consumers in the region are looking for healthier and convenient ready-to-eat foods and RTD beverages, providing further impetus to the stevia industry. The rise in disposable incomes has resulted in consumers seeking out organic and premium products, further aiding the industry growth. The Asia Pacific stevia market is also being driven by younger, more calorie-conscious consumers. Additionally, the expanding application of stevia is propelling the market forward. Toothpaste and cosmetic products like lipsticks, and lip balm have started incorporating the natural sweetener.

The report provides a detailed insight into the following key players in the Asia Pacific stevia market, covering their market share, capacity, and latest developments like expansions of capacity, mergers and acquisitions, and plant turnarounds:

The EMR report gives an in-depth look into the market based on the Porter’s Five Forces model. It also looks into the other global markets like North America, Europe, Latin America, and the Middle East and Africa. A SWOT analysis has been provided, as well.

What was the Asia Pacific stevia market size in 2021?

What is the growth rate of the Asia Pacific stevia market?

The major drivers of the industry include the rising disposable incomes, increasing population, and the rising health awareness among the consumers due to the growing incidences of obesity and diabetes.

What are the key industry trends of the Asia Pacific stevia market?

The rising acceptance of the product by both the consumers and manufacturers is expected to be a key trend guiding the growth of the industry.

What are the major regional markets of stevia in the Asia Pacific, according to the market report?

China, India, and Japan, among others, are the leading regions in the market, with China accounting for the largest market share.

What are the leading extract types of stevia in the industry?

The leading extract types of stevia in the industry are leaf, powder, and liquid.

The major application segments in the market are food and beverages, oral care, tabletop sweetener, and pharmaceuticals, among others.

The Asia Pacific stevia market attained a value of nearly USD 205.14 million in 2021, driven by rising health concern and consumer awareness about drinks with high sugar content and growing demand for dietary food. Aided by favourable government policies, the market is expected to witness a further growth in the forecast period of 2022-2027, growing at a CAGR of 11.1%. The Asia Pacific stevia market is projected to reach about USD 388.44 million by 2027.

EMR’s meticulous research methodology delves deep into the industry, covering the macro and micro aspects of the industry. Based on extract types, the market can be segmented into leaf, powder, and liquid. On the basis of application, the industry is divided into food and beverages, oral care, tabletop sweetener, and pharmaceuticals, among others. The major regional markets for stevia in the Asia Pacific are China, India, and Japan, among others, with China accounting for the largest share of the industry. The key players in the above industry include Cargill, Incorporated, Archer Daniels Midland Company, Ingredion Incorporated, Tate & Lyle PLC, SteviaPac Food Innovation, Layn Corporate, Zhucheng HaoTian Pharm Co.,Ltd, Sunwin Stevia International, Inc, among others.