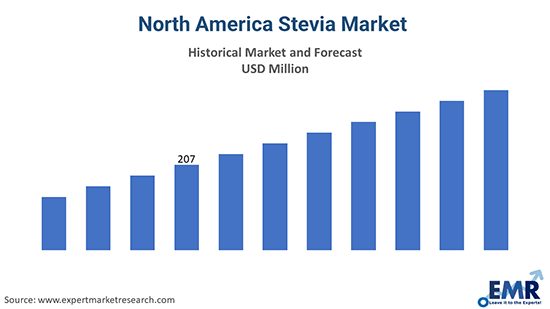 Being a leading regional market, the thriving North America stevia market is also aiding the global industry growth. By 2026, the global market is projected to attain a value of USD 787 million, growing robustly at a CAGR of 8.6% in the forecast period of 2023-2028.

The industry in North America is being driven by the expanding application sectors in the industry. Currently, the natural sweetener finds the majority of its application in North America in soft drinks followed by sports nutrition and dairy. The soft drinks sector accounts for over 30% of the stevia application in the North America and Latin America markets while the sports nutrition sector accounts for a fifth of the application of the natural sweetener in the two regions. The market in the regions is being aided by greater government regulations like taxation on sugary beverages and rising awareness about the ill-effects of sugar consumption.

The North America stevia market is finding further impetus due to the innovation and research being undertaken in the industry. Major manufacturers are incorporating Reb M based stevia sweeteners in their products due to their superior taste profiles. They can either be derived from the stevia leaf or through the conversion of the first-generation type of the natural sweetener. The Reb M based natural sweetener is expected to sweeten almost 1 billion cases of low or zero-calorie carbonated soft-drinks, annually. With consumers increasingly seeking out non-genetically modified products, manufacturers are investing in growing or sourcing non-GMO stevia leaf to produce the natural sweetener.

Stevia is native to countries like Brazil and Paraguay. It is used as a natural sweetener and sugar substitute containing zero calories. Leaves, powder, and liquid are the common extract forms of the sweetener. Its common application sectors are: 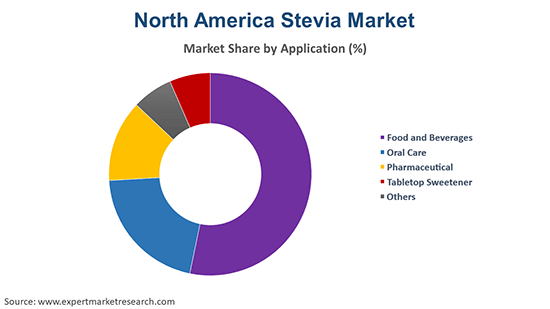 The EMR report also gives an in-depth look into the regional markets like the US and Canada. 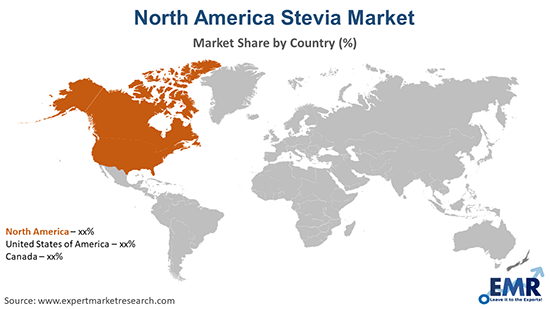 North America stevia market is being driven by the rising health awareness about the growing prevalence of diseases like type 2 diabetes and obesity, which can be linked to high consumption of sugar. Nearly 37.7% of the US population was afflicted with obesity in 2017. With consumers looking for alternatives to sugar in the region, the sugar-substitute market is expected to grow in the coming years. Currently, North America accounts for almost 37% of the industry and is aiding the stevia market growth in the area. With consumers moving away from artificial sweeteners and adopting natural alternatives, the industry is being further propelled forward. Trending low sugar or lifestyle diets like keto or paleo diets are also aiding the North America stevia market as consumers are looking to stevia as a healthier and natural substitute for sugar with a similar taste profile.

The North America industry is being aided by the rising demand for low-calorie food and beverages with either low or no sugar content. With growing disposable incomes and busier lifestyles, consumers in the US and Canada are increasingly preferring healthier ready-to-drink (RTD) beverages. The rise in the demand for healthier RTD drinks is also aiding the stevia market. The sugary beverage tax imposed in multiple US cities is providing a further impetus to the industry. While the consumption of carbonated drinks, where stevia finds a majority of its application in the US, has declined, it is being offset by the increased demand for US carbonated drinks imports by overseas markets like Mexico. The market is being further aided by not just the increasing innovations taking place within the industry but also in its various application sectors like the sports and energy drinks sector.

Stevia has been approved for use in food and beverage products in Canada and the US. In the US, whole-leaf stevia and crude extracts of the sweetener have not been approved by the US Food and Drug Administration. However, refined preparations of the natural sweetener like Reb A and Reb M have been classified as GRAS or ‘Generally Recognised as Safe’ by the FDA.

The report provides a detailed insight into the following key players in the North America stevia market, covering their market share, capacity, and latest developments like capacity expansions, plant turnarounds, and mergers and acquisitions:

The report by EMR gives an in-depth insight into the manufacturing process and provides a cost analysis. The comprehensive report assesses the market based on the Porter’s Five Forces model. It also provides an overview of the other regional markets like the Asia Pacific, Middle East and Africa, Europe, and Latin America.

What was the North America stevia market size in 2021?

The North America stevia market attained a value of nearly USD 218.45 million in 2021.

The major drivers of the industry include rising disposable incomes, increasing population, rising health awareness, and the increased demand for low-calorie food and beverages.

What are the key industry trends of the North America stevia market?

The increasing innovations as well as the sugary beverage tax imposed in various United States cities is expected to be a key trend guiding the growth of the industry.

What are the major regional markets of stevia in North America, according to the EMR report?

The United States of America and Canada are the major regions in the market.

What are the leading extract types of the product in the industry?

The leading extract types of the product in the industry are leaf, powder, and liquid.

What are the major application segments of the industry?

The major application segments of the industry are food and beverages, oral care, pharmaceuticals, and tabletop sweetener, among others.

EMR’s meticulous research methodology delves deep into the industry, covering the macro and micro aspects of the industry. Based on extract types, the market can be segmented into leaf, powder, and liquid. On the basis of application, the industry can be divided into food and beverages, oral care, pharmaceutical, and tabletop sweetener, among others. The major regional markets for stevia in North America are the United States of America and Canada. The key players in the above industry include Nascent Health Sciences LLC (SoPure), GLG Life Tech Corporation, Cargill Inc., Archer Daniels Midland Company, Ingredion Incorporated, Others.