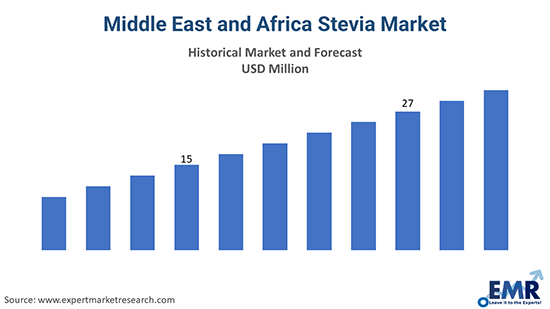 While the market penetration of stevia in the Middle East and Africa is still low, the industry is expected to witness a healthy growth. Major players in the industry are seeking to invest and diversify their product portfolio in the region to incorporate stevia into traditionally consumed products. Companies are also investing in the leaf supply diversification in the region, particularly in Africa. With governments in the area working to reduce the consumption of sugar due to the rising cases of obesity and diabetes, the stevia industry is being further propelled forward. The proposed sugary beverage tax in countries like Saudi Arabia and UAE might also propel the industry forward. Currently, South Africa is a significant producer of stevia in the region.

Globally, the Asia Pacific is the largest stevia market, with China being its leading producer. Japan is emerging as a significant consumer of stevia in the region with the natural sweetener accounting for almost 40% of the country’s current sweetener industry. The Asia Pacific is followed by Europe as a leading stevia market. The sweetener is processed on the continent from imported stevia leaves. Major food and beverage manufacturers, globally, are investing more in developing products containing the natural sweetener. The Asia Pacific and Europe lead in the launches of products containing stevia. Latin America and North America are the other major markets. Paraguay and Brazil are the major producers in the Latin America region with the stevia plant being native to the countries. The industry for the natural sweetener in the Americas is being driven by the easy availability of the raw materials and their thriving food and beverage industry. The industry in the region is also finding impetus in the growing health consciousness among the consumers, and growing aversion to artificial sweeteners.

Stevia is a natural sweetener containing zero calories manufactured from the leaves of the plant, Stevia rebaudiana, native to Brazil and Paraguay. Its active compound, steviol glycosides, are 30-150 times sweeter than sugar. According to the extract types, it is available in leaves, liquid, and powder forms. It finds extensive use in the following sectors: 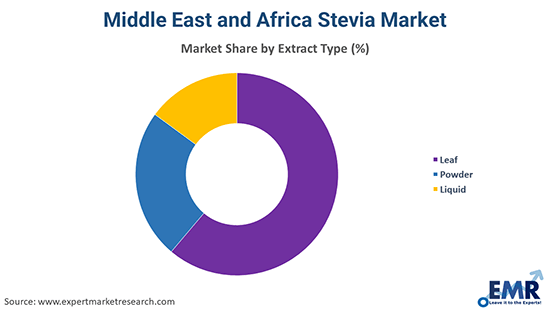 The EMR report also looks in-depth into the regional stevia markets in the Middle East and Africa like Saudi Arabia, UAE, South Africa, and Turkey, among others. 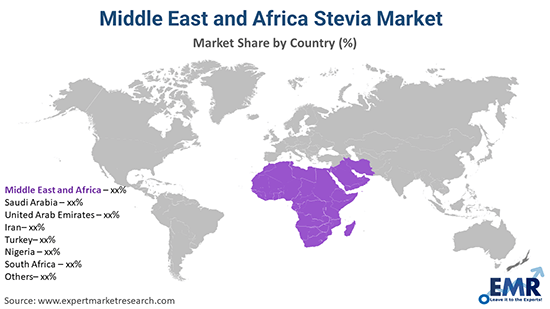 The Middle East and Africa stevia market is being driven by the rising cases of obesity and diabetes, leading to a greater demand for low-calorie sweeteners. Currently, over a quarter of the population in countries like the UAE, Saudi Arabia, Qatar, Kuwait, and Bahrain are afflicted with obesity. With consumers moving away from artificial sweeteners towards more natural products, the stevia industry in the region is being propelled forward. The rise in population, along with an increase in the disposable incomes, is further driving the industry growth. The industry in the region is also being aided by the more health conscious younger consumers.

The stevia industry in the Middle East and Africa is also being driven by the growing acceptance of the ingredient, both by the consumers and the governments. The natural sweetener passed regulatory clearance for its application in the food and beverage sector in major markets like South Africa and Egypt in 2013 and 2014, respectively. The Gulf Cooperation Council’s (GCC) Standardisation Organisation (GSO) put out its final regulation regarding the application of steviol glycosides in foods and beverages in 2016. The regulations dictate the substance’s application in products like non-alcoholic drinks, nectars, breakfast cereals, confectionery, canned and bottled fruits, bakery products, and marmalades, among others. The rising innovations taking place in the industry in the region will further drive the industry growth.

The report provides a detailed insight into the following key players in the Middle East and Africa stevia market, covering their market share, capacity, and latest developments like mergers, acquisitions, and investments, capacity expansions, and plant turnarounds:

The EMR report assesses the market based on the Porter’s Five Forces model along with a SWOT analysis. The comprehensive report also gives an in-depth insight into the costs involved, the value chain, and the manufacturing process. It also covers other global markets like North America, Asia Pacific, Latin America, and Europe.

What is the growth rate of the Middle East and Africa stevia market?

The major drivers of the industry include rising disposable incomes, increasing population, rising demand for natural ingredients, and the growing awareness about the product.

What are the key industry trends of the Middle East and Africa stevia market?

The government in the region is working to reduce the consumption of sugar due to the growing cases of obesity and diabetes, which is expected to be a key trend guiding the growth of the industry.

What are the major regional markets of stevia in the Middle East and Africa, according to the market report?

Saudi Arabia, the United Arab Emirates,  Nigeria, Turkey, Iran, and South Africa, among others, are the leading regions in the market.

What are the leading extract types of stevia in the market?

The leading extract types in the market are leaf, liquid, and powder.

What are the major application segments of the industry?

The major application segments of the industry are food and beverages, oral care, pharmaceuticals, and tabletop sweetener, among others.

The leading players in the market are Cargill, Incorporated, Tate & Lyle PLC, Archer Daniels Midland Company, and Ingredion Incorporated, among others.

EMR’s meticulous research methodology delves deep into the industry, covering the macro and micro aspects of the industry. Based on extract types, the market in the Middle East and Africa can be segmented into leaf, liquid, and powder. On the basis of application, the industry is divided into food and beverages, oral care, pharmaceutical, and tabletop sweetener, among others. The major regional markets for stevia in the Middle East and Africa are Saudi Arabia, the United Arab Emirates, Iran, Turkey, Nigeria, and South Africa, among others. The key players in the above industry include Cargill, Incorporated, Tate & Lyle PLC, Archer Daniels Midland Company, and Ingredion Incorporated, among others.