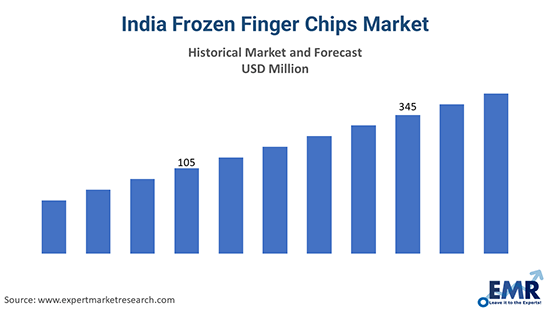 Finger chips or French fries are one of the most popular food in the world. Frozen finger chips offer not only an attractive appearance but also a delicious taste. The increasing number of supermarkets and hypermarkets, along with the globalisation of culinary practices, have significantly increased the demand for frozen finger chips. Moreover, they offer various other advantages such as longer shelf life, convenient preparation, and various flavours, shapes and sizes; factors such as these catalyse the market growth.

Potato, introduced during the colonial period, has become one of the staple foods across India. It is not only used in various Indian dishes but also enjoys its popularity in global foods such as burgers and finger chips. The entry and subsequent widespread popularity of American fast-food chains such as KFC, McDonald’s, and Burger King, among others, have made finger chips a suitable snack for Indians. Moreover, they are also swiftly replacing prevalent potato snacks, such as pakoras and samosa, and have become immensely popular in urban Indian households, particularly among children and youth.  Frozen finger chips are one of the fastest-growing snacks and account for one of the largest selling side dishes in retail chains such as Big Bazaar and Spencer’s Retail.

Frozen finger chips, variously known as french fries, are thin strips of potatoes that are kept refrigerated or frozen until deep- fried. They are one of the most popular dishes around the world. They are assumed to be originated from Belgium and became increasingly popular in the United States after World War I. They are usually eaten with ketchup, vinegar, mayonnaise, or tomato sauce, among others. 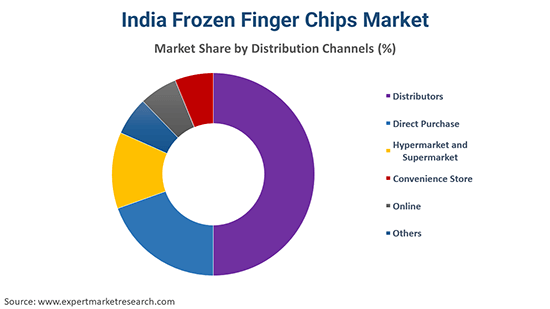 The major types  of frozen finger chips are:

The market can be broadly categorised on the basis of its distribution channels into:

On the basis of applications, the market can be segmented into:

Based on the end uses, the market can be divided into: 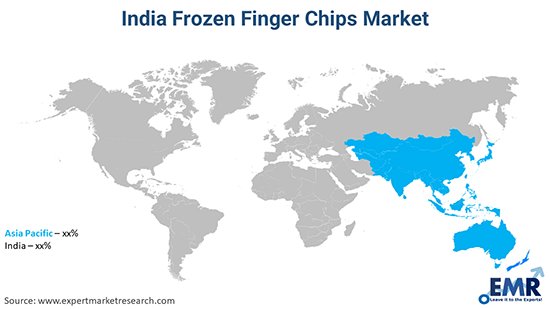 Rising Demand for Convenient Food to Bolster the Market Growth

The surging Americanisation of India accounts for the growth of the market for frozen foods. Indian youths, in particular, have become more accustomed to the American culture and cuisines, due to which the demand for foods, such as American pizza, pancakes, burgers, and finger chips, has risen in India. Frozen finger chips offer a healthier alternative to the double deep-fried finger chips of the fast-food retails and can be fried or baked as per preference. They are one of the most popular convenience foods and are easy to prepare and consume. The report by Feeding Infants and Toddler Study (FITS) concludes that French fries are the most popular vegetable eaten by children. The evolving culinary preferences and consumption habits are also significant in boosting the market growth for frozen finger chips.

The report presents a detailed analysis of the following key players in the India frozen finger chips market, looking into their capacity, market shares, and latest developments like capacity expansions, plant turnarounds, and mergers and acquisitions:

What was the India frozen finger chips market size in 2020?

The industry is driven by the increasing popularity of American fast-food chains and the rising consumer purchasing powers.

What are the key industry trends of the India frozen finger chips market?

The industry is aided by the increasing demand for convenience ready-to-eat foods.

What are the major types of frozen finger chips in the industry?

The dominant type of frozen finger chips in the industry are plain and masala/seasoned.

What are the significant distribution channels of frozen finger chips?

The distribution channel segment is led by distributors, direct purchase, supermarkets and hypermarkets, convenience stores, , and online, among others.

What are the significant applications of frozen finger chips?

The major applications of frozen finger chips are institutional and retail.

What are the major end uses of the market?

The end uses of the market for frozen finger chips are quick service restaurants (QSR), households, pub, bar, club, and lounge (PBCL), and restaurants, among others.

The India frozen finger chips market attained a value of USD 121 million in 2020, driven by the rising prevalence of American fast-food chains. Aided by the increasing demand for convenience food, the market is expected to witness a further growth in the forecast period of 2022-2027, growing at a CAGR of 20%. The market is projected to reach USD 376 million by 2026.

EMR’s meticulous research methodology delves deep into the market, covering the macro and micro aspects of the industry. Based on its types, the frozen finger chips industry can be segmented into plain and masala/seasoned . On the basis of distribution channels, the industry is divided into  distributors, direct purchase, supermarkets and hypermarkets, convenience stores, and online, among others. The significant applications of frozen finger chips are institutional and retail. The major end uses of the frozen finger chips industry are quick service restaurants (QSR), household, pub, bar, club and lounge (PBCL), and restaurants, among other.  The key players in the above market include McCain Foods Limited, Iscon Balaji Foods Private Limited,ITC Limited, Gujarat Cooperative Milk Marketing Federation (Amul), Godrej Agrovet Limited, and HyFun Foods, among others.

The global gluten-free pasta market attained a value of USD 1.04 billion in 2021, driven by the increasing prevalence of celiac disease. Aided by the increase in the number of health-conscious people ...
Read More

The global gnocchi market is being driven by the growth in demand for convenience food. Aided by the increase in ready-to-eat and frozen meals, the market is expected to witness further growth in the ...
Read More

The global processed meat market attained a value of more than USD 320.2 billion in 2021, driven by the increase in the consumption of ready-to-eat food. Aided by the longer shelf lives of processed ...
Read More