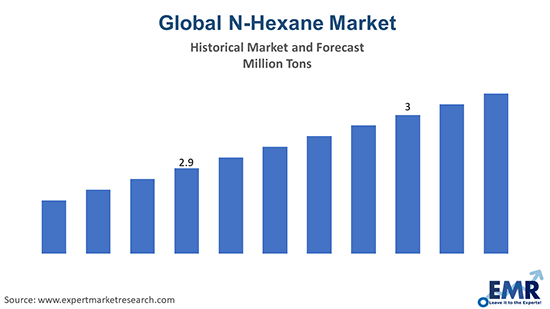 Based on the application, the edible oil extraction segment accounted for the majority of the global market share as it provides a high yield from the oilseeds. Also, it is beneficial as it can be reused after the extraction process. Regionally, the Asia Pacific represented the largest regional n-hexane market in 2020. This regional growth can be attributed to the increasing population, coupled with the growing demand for refined oil in countries like India and China.

N-hexane is a volatile aliphatic hydrocarbon that is procured from crude oil and natural gas. It can also be obtained from sugar cane wastes by employing special catalysts. N-hexane is colourless in the purest form and has an unpleasant odour, identical to petroleum. Also, it is highly flammable and comprises of explosive vapours due to which it is mostly mixed with other solvents before used in the production of different products. Moreover, it is commonly used in the form of an industrial chemical and laboratory reagent. Solvents containing n-hexane are also used in the extraction of vegetable oils from oilseeds such as corn, sunflower, and soybeans. 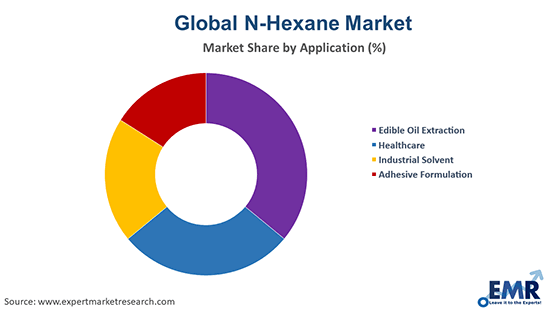 The n-hexane market can be broadly segregated on the basis of its application segment into:

The EMR report looks into the regional markets in the global n-hexane market like North America, the Asia Pacific, Europe, Latin America, and the Middle East and Africa. 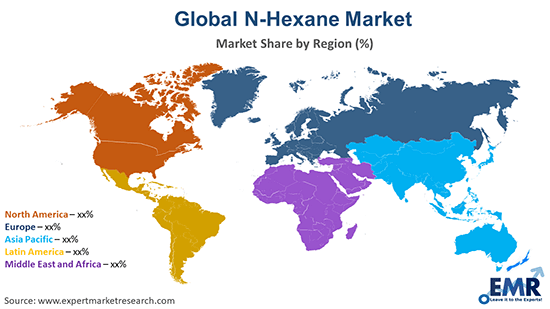 N-hexane is widely used as a primary solvent in industrial and chemical products such as leather, polypropylene, paint, and rubber. Increasing sales of these products are anticipated to drive the demand for n-hexane over the forecast period. The rising adoption of n-hexane in the pharmaceutical industry for shaping pills and tablets, along with its use in various synthesis and separations processes, are expected to propel the growth of the n-hexane market over the forecast period. Moreover, it offers many advantages over other solvents such as cost-effectiveness and recyclability.

Additionally, it is easy to remove from solids and oil, due to which there has been an apparent shift towards its use in various applications. Rapid urbanization, growing global population, and inflating income levels are also stimulating the demand for n-hexane. In addition to this, n-hexane is widely utilized in vegetable oil extraction as it aids in removing odour and unwanted taste. Furthermore, the growing demand for n-Hexane as a cleaning agent in various end-use industries such as cleaning and textile is likely to uplift the n-hexane market in the coming years.

The report presents a detailed analysis of the following key players in the global n-hexane market, looking into their capacity, market shares, and latest developments like capacity expansions, plant turnarounds, and mergers and acquisitions:

What was the global n-hexane market size in 2020?

The major drivers of the industry, such as rising disposable incomes, increasing population, growing sales of leather, polypropylene, paint, and rubber, increasing use of the product in vegetable oil extraction, and increasing adoption of the product as a cleaning agent are expected to aid the market growth.

What are the key industry trends of the global n-hexane market?

The rising adoption of n-hexane in the pharmaceutical industry for shaping pill and tablets is a major trend driving the growth of the industry.

What are the major regions of n-hexane according to the market report?

The edible oil extraction segment accounts for the largest market share among other application segments.

The key players in the industry are Shell Chemicals and Exxon Mobil Corporation, among others.

The global n-hexane market attained a volume of 2.75 million tons in 2020 driven by the rising use of the product in vegetable oil extraction. Aided by the growing adoption of the product in the pharmaceutical industry for shaping pill and tablets, the industry is expected to witness a further growth in the forecast period of 2021-2026, growing at a CAGR of 1.6%. The n-hexane market is projected to reach 3.03 million tons by 2026.

EMR’s meticulous research methodology delves deep into the industry, covering the macro and micro aspects of the industry. On the basis of application, edible oil extraction sector accounts for the largest share in the n-hexane market. The major regional markets for n-hexane are North America, the Asia Pacific, Europe, Latin America, and the Middle East and Africa, with the Asia Pacific accounting for the largest share of the industry. The key players in the above industry include Shell Chemicals and Exxon Mobil Corporation, among others.

EMR’s research methodology uses a combination of cutting-edge analytical tools and the expertise of their highly accomplished team, thus, providing their customers with industry insights that are accurate, actionable, and help them remain ahead of their competition.