The global sorbitol market attained a volume of about 2.5 million metric tons in 2020. Increasing awareness towards health has led to a greater demand for low-calorie foods which has, in turn, contributed to a steady growth of the global sorbitol market over the past few years. During the forecast period of 2022-2027, the industry is expected to grow at a CAGR of 1.5% to reach 2.7 million metric tons by 2026. 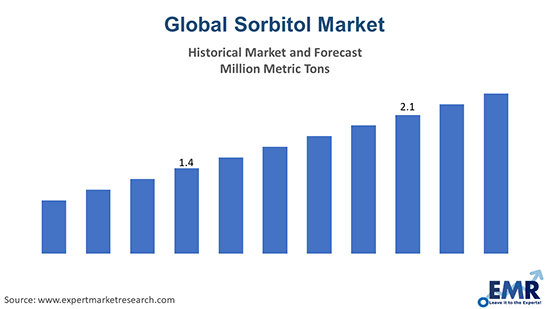 Although a number of feedstock can be used for making sorbitol, the choice of feedstock mainly depends upon the total cost of production and the ease of availability in the region. Corn, cassava and wheat represent the most popular feedstock for sorbitol production.

Sorbitol, a six-carbon sugar alcohol, occurs in plants naturally. It can also be synthesised through catalytic hydrogenation of D-glucose to produce D-sorbitol. Sorbitol has non-cariogenic and sweetening properties due to which it is used in toothpaste and oral care products, beverages, ice-creams, jams, syrups, candies, jellies, etc. It is also used as a laxative. 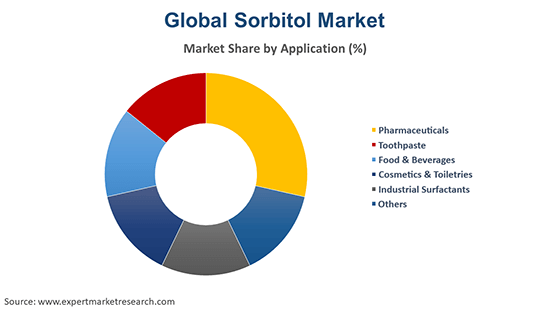 The forms of the product can be divided into liquid and powder.

Several other applications include:

The major regions included in the global sorbitol market include North America, Europe, the Asia Pacific, Latin America, and the Middle East and Africa. 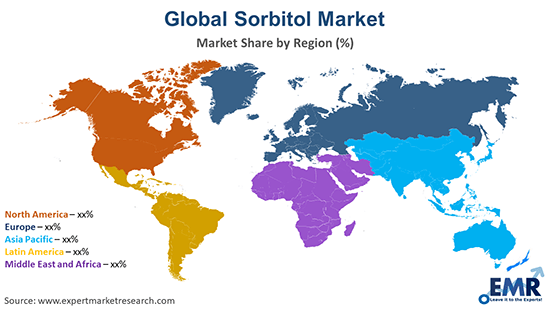 China was the greatest consumer of sorbitol with almost 40% of the world’s total consumption in 2016. Asia Pacific remained the largest region for sorbitol industry in 2016 with more than half of the global industry share and is likely to maintain this position in years to come due to favourable government policies and greater FDI flows for pharmaceutical and personal care firms in India and China. The sorbitol market in North America and Europe is anticipated to exhibit steady growth in the forecasted years due to the growing home and personal care and food and beverage industry in the region followed by economies such as India, Thailand and Indonesia. Inconsistencies in price and supply of raw materials, side-effects due to over-consumption of sorbitol and international regulations are factors that may hinder the growth of sorbitol industry. A detailed analysis including the price movement and regional market scenario of the sorbitol feedstock such as corn, cassava, wheat, etc. is offered in this report.

ADM announced a proposed acquisition of Neovia, a global provider of value-added animal nutrition solutions with 72 production facilities and a presence in 25 countries.

Cargill has launched a farm-based program raising food starch sustainability across Europe that helps farmers to continuously improve their practices and reduce their impact on the environment in corn growing areas.

The report gives a detailed analysis of the following key players in the global sorbitol market, covering their competitive landscape, capacity, and latest developments like mergers, acquisitions, and investments, expansions of capacity, and plant turnarounds:

The global sorbitol market reached volume of about 2.5 million metric tons in 2020.

What is the growth rate of the industry?

By 2026, the market is estimated to attain a value of 2.7 million metric tons.

The major drivers of the industry include the rising disposable incomes, increasing population, and growing home and personal care and food and beverage industries.

Favourable government policies and greater FDI flows for pharmaceutical and personal care firms are expected to be the key trends guiding the growth of the global sorbitol market.

North America, Europe, the Asia Pacific, Latin America, and the Middle East and Africa are the leading regions in the global sorbitol market, with the Asia Pacific accounting for the largest market share.

What are the major forms in the industry?

The leading forms of the product are categorised into liquid and powder.

The most significant application sectors of the industry include pharmaceuticals, toothpaste, food and beverages, cosmetics and toiletries, and industrial surfactants, among others.

The leading players in the global sorbitol market are Roquette Frères, Cargill, Incorporated, Ingredion Incorporated, ADM, and Merck KGaA, among others.

The global sorbitol market attained a volume of about 2.5 million metric tons in 2020. Increasing awareness towards health has led to a greater demand for low-calorie foods which has, in turn, contributed to a steady growth of the global sorbitol market over the past few years. During the forecasted period of 2022-2027, the market is expected to grow at a CAGR of 1.5% owing to a multitude of sorbitol applications across several types of industries and is projected to reach a volume of 2.7 million metric tons by 2026.