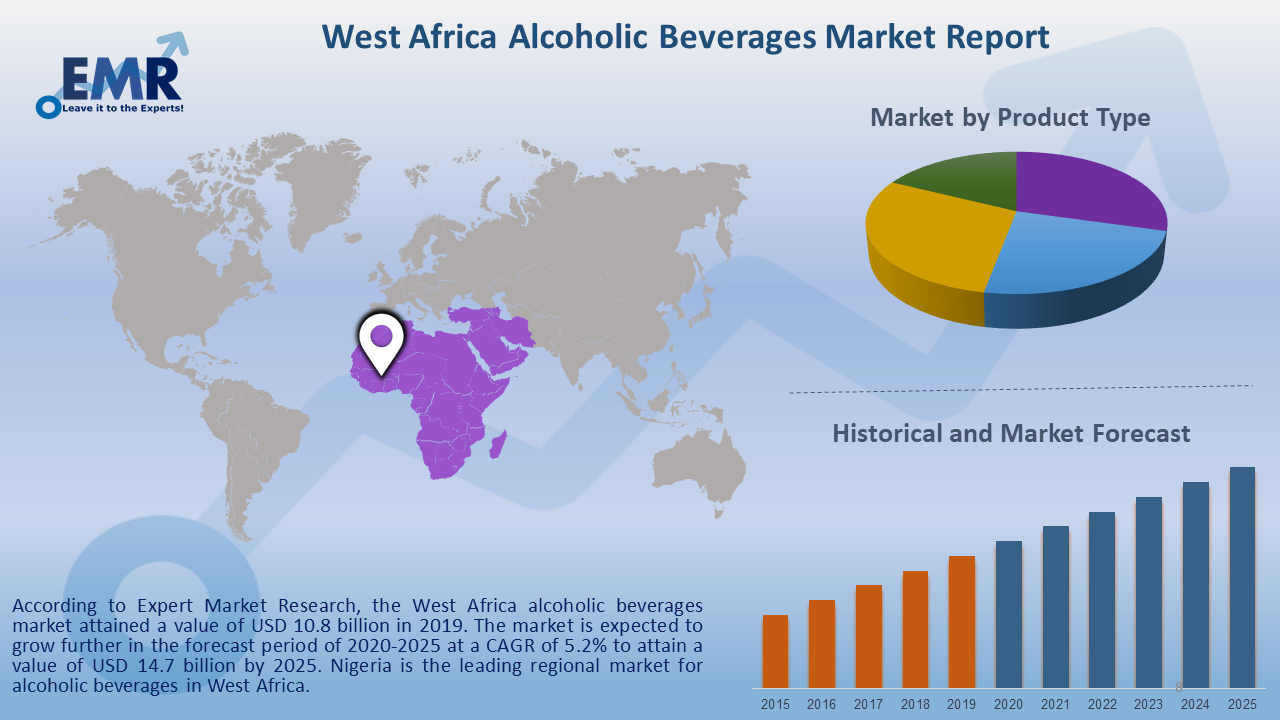 An alcoholic beverage is commonly produced by the fermentation of fruits, grains, and other sugar sources and, thus, contains ethanol. It can be additionally flavoured by herbs, spices, and other flavouring substances.

Based on the product types, the West Africa alcoholic beverages market can be segmented into:

By packaging type, the industry can be classified as:

The major distribution channels for alcoholic beverages in West Africa are:

The report by EMR looks into the major regional market for the product like Nigeria, Cote d’Ivoire, Ghana, Burkina Faso, Republic of Benin, and Senegal, among others.

The industry growth can be attributed to the presence of major global players like Heineken, AB InBev, and Diageo in the region. The growing FDI flows in the region are further aiding propelling the industry forward. The expansion of local players in West Africa is projected to support the growth of the industry in the coming years.

The report presents a detailed analysis of the following key players in the alcoholic beverages industry in West Africa, looking into their capacity, competitive landscape, and latest developments like capacity expansions, plant turnarounds, and mergers and acquisitions:

The comprehensive report by EMR covers the macro and micro aspects of the industry. An assessment of the Porter’s Five Forces model, along with an analysis of the value chain has been provided within the report. A SWOT analysis has been given within the EMR report as well.

What was the West Africa alcoholic beverages market size in 2020?

In 2020, the West Africa alcoholic beverages market reached a value of USD 10.8 billion.

The major drivers of the industry such as rising disposable incomes, increasing population, growing investments, changing demographics, and an increasing shift towards branded products are expected to aid the market growth.

What are the key industry trends of the West Africa alcoholic beverages market?

Increasing FDI flows in the region and the expansion of local players are the major trends propelling the growth of the market.

What are the major regions of alcoholic beverages in West Africa according to the market report?

The leading regions in the market are Nigeria, Cote d’Ivoire, Ghana, Burkina Faso, Republic of Benin, and Senegal, among others, with Nigeria accounting for the largest market share.

What is the dominant product type of alcoholic beverages in the industry?

The most significant product type in the industry is beer.

Which packaging type accounts for the largest market share?

What is the leading distribution channel of alcoholic beverages in West Africa?

Open markets is the most significant distribution channel in the market.

The leading players in the industry are Diageo Plc, The HEINEKEN Company, AB InBev, and Kasapreko, among others.

The West Africa alcoholic beverages market attained a value of USD 10.8 billion in 2020 driven the growing shift towards premium products and the rising penetration of global players. Aided by the expansion of the local players, the market is expected to witness a further growth in the forecast period of 2021-2026, growing at a CAGR of 5.2%. The industry is projected to reach USD 14.7 billion by 2026.

EMR’s meticulous research methodology delves deep into the market, covering the macro and micro aspects of the industry. Based on its product types, the alcoholic beverages industry in West Africa can be segmented into beer, spirits, wine, and others, with beer accounting for the largest market share in the regional market. On the basis of packaging type, glass bottles hold the largest market share. Open markets represent the leading distribution channel for alcoholic beverages in West Africa. The major regional markets for the product are Nigeria, Cote d’Ivoire, Ghana, Burkina Faso, Republic of Benin, and Senegal, among others, with Nigeria accounting for the largest share of the market. The key players in the above industry include Diageo Plc, The HEINEKEN Company, AB InBev, Kasapreko, and others.

The Indian premium tea industry is supported by the growth of tea market, which is expected to witness a further growth in the forecast period of 2021-2026, growing at a CAGR of 4.2%. The tea market i...
Read More

The global earl grey tea market attained a volume of 6.5 million tons in 2020, driven by rising health consciousness. Aided by the growing demand for organic products, the market is expected to witnes...
Read More