The Asia Pacific is the leading regional A2 milk market. Within the region, Australia and China are emerging as some of the significant markets. The industry in these two regions is being driven by the sustained interest and expansion of key players in the industry like the A2 Milk Company Limited. The market is also supported by the strong brand awareness among the consumers and the growing awareness of the product’s various nutritional benefits. The growth of the premium milk segment in these countries is also expected to aid the growth of the industry. The infant formula segment is, particularly, expected to grow in these two countries in the coming years. China is one of the most significant markets for baby formula with leading players in the baby formula industry like Nestle, Danone, and Reckitt Benckiser expanding their infant formula business in the country. Post- the 2008 infant formula scandal, A2 milk’s claims of being healthier and more nutritional is expected to drive the industry growth in the infant formula segment. The relaxation of China’s one-child policy in 2013 has provided a further boost for the segment growth. However, in the coming years the growth of the segment might be hindered by the imposition of stricter regulations regarding infant formula in the country.

A2 milk is defined as a cow milk which lacks the A1 β-casein protein types. It is a rich in omega-3 and is supposed to prevent symptoms like gas, diarrhoea, and bloating in people with lactose intolerance. It finds its end-use in the following segments:

The major distribution channels of the product are supermarkets and hypermarkets, convenience and grocery stores, online stores, and others.

The EMR report covers the regional A2 milk markets like the Asia Pacific, Europe, Latin America, the Middle East and Africa, and North America. 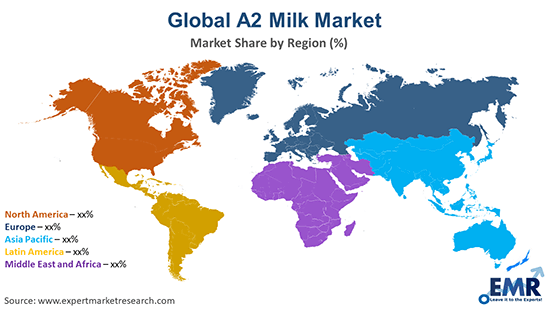 With A2 milk being marketed as a premium low fat and value-added milk, the rising disposable incomes and growing health consciousness among the consumers globally is expected to aid the global A2 milk market growth. The A2 milk market will be aided by the expansion of major players into major emerging markets. India and China in the Asia Pacific present lucrative expansion opportunities for the key manufacturers in the industry. The growing population is also aiding the industry growth, particularly in the infant formula segment. The rising number of R&D activities undertaken by the companies and increasing innovations in the industry is expected to further propel the industry forward. The growing product diversity in the industry is also aiding the growth of the market, with leading players in the market introducing variants of the product like flavoured milk, cheese, and yoghurt, among other common milk products.

While the liquid milk is the leading type in the global market, accounting for over 60% of the industry, the infant formula segment is expected to witness a robust growth, especially in emerging economies. The growth of the distribution channels for A2 milk market is also expected to boost the industry growth. Supermarkets and hypermarkets are the largest distribution channel of the product with online channels expected to witness a healthy growth in the forecast period due to the increasing penetration of internet and growing e-retail stores. However, the growth of the industry might be impeded by the availability of cheaper vegan alternatives and the lack of proper scientific evidence to back the product claims.

August 2018- The a2 Milk Company has entered into a strategic relationship with Fonterra Co-operative Group Limited for the production, sale, distribution, and marketing of the recently launched branded fresh milk, a2 Milk™, in New Zealand.

November 2017- The a2 Milk Company launched its branded infant formula, a2 Platinum®, in Hong Kong.

The report analyses the following key players in the global A2 milk market, covering their capacities, market share, and latest developments like capacity expansions, plant turnarounds, and mergers, acquisitions, and investments:

The industry is expected to witness a robust growth in the forecast period to reach a value of USD 2607.4 million by 2026.

The major drivers of the A2 milk market such as the rising disposable incomes, increasing population, growing health consciousness, expanding product portfolios, and rising distribution channels are expected to aid the industry growth.

What are the key industry trends of the global A2 milk market?

The emergence of health-conscious consumers and the introduction of flavoured variants of the product are the major trends expected to aid the market growth.

What are the major regions of the product according to the market report?

The Asia Pacific accounts for the largest market share among other regions, with North America and Europe being some of the other emerging markets for the product.

Liquid milk is the leading end use segment in the market.

What is the leading distribution channel of the product?

Supermarkets and hypermarkets are the major distribution channels in the industry.

The major players in the industry are The a2 Milk Company, GCMMF (Amul), and others.

The global A2 milk market attained a value of USD 1,225 million in 2020 aided by the expansion of the leading players in emerging economies and the rising product awareness. With the growth of the market in regions like North America and Europe, it is expected to witness a further growth in the forecast period of 2022-2027 at a CAGR of 13.5%. The market is projected to reach USD 2607.4 million by 2026 aided by the diversification of product and the rising awareness of the benefits of the product.

EMR’s meticulous research methodology delves deep into the market, covering the macro and micro aspects of the industry. Based on its end use, the A2 milk market can be segmented into liquid milk and infant formula, among others, with liquid milk being the leading end-use segment in the industry. On the basis of distribution channels, supermarkets and hypermarkets sector hold largest market share. The major regional markets are the Asia Pacific, Europe, Latin America, the Middle East and Africa, and North America, with the Asia Pacific accounting for the largest share of the market. The key players in the above market include The a2 Milk Company, and GCMMF (Amul), among others.

The global dairy snack market is driven by the rise in demand for protein rich diet. Aided by availability of packed dairy snacks, the market is expected to grow at a CAGR of 3.6% in the forecast peri...
Read More