The global soy protein market attained nearly USD 8.91 billion in 2020. The market is expected to witness a healthy growth in the coming years and is projected to grow at a CAGR of 7.2% in the forecast period of 2022-2027. In 2026, the soy protein industry is estimated to reach USD 13.53 billion. 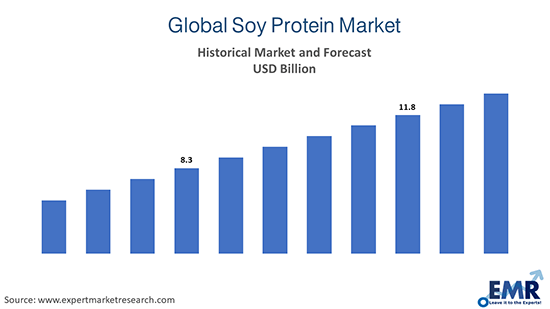 The soy protein industry is being driven by the rising demand for plant proteins, globally. Soy protein is the largest segment in the plant-based proteins industry. It accounts for nearly 60% of the market.

The demand for soybean is pervasive across temperate and tropical regions and is a globally traded commodity as it is a significant source of vegetable oil and protein.  The Americas, together, account for almost 90% of the total production of soybean, globally. The United States, Brazil, and Argentina are the major producers of soybean. China is also a significant producer of soybean globally and is also a leading importer of the commodity. However, the country is expanding its soybean output to reduce dependency on import. In the crop year 2020/20, the country’s output of the commodity is expected to grow by 7.9% as compared to the previous year and is estimated to cross 17 million tonnes for the first time since 2004/05.

Soy protein is derived from soybean meal, which has been dehulled and defatted. It is the protein that has been isolated from soybean. Commercially, they are available as high-protein products like isolate, concentrate, and soy protein flour, among others. It finds extensive application in sectors like: 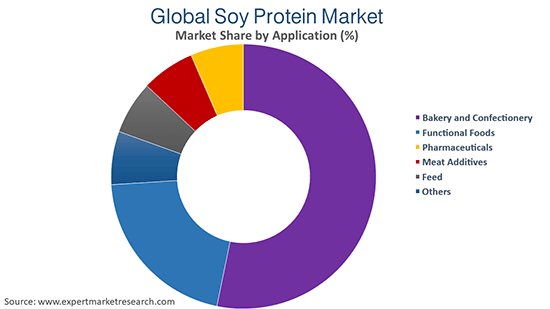 The report also gives an in-depth look into the various regional markets like North America, Latin America, Middle East and Africa, Europe, and the Asia Pacific.

The global soy protein market is being driven by the growing trend of health and wellness diets, which require high-protein intake. The industry is also being aided by the rising demand from consumers eschewing animal-based food and beverage products in favour of plant proteins. The increase in the number of people taking up a vegan diet is also acting as a catalyst for the industry. While veganism is still a relatively niche interest, the market for vegan foods and beverage is growing, especially propelled by younger consumers. Major manufacturers and food outlets are introducing vegan alternatives to traditional products. The resultant rise in plant-based protein alternatives is aiding the soy protein industry growth. Soy protein is being increasingly consumed as an alternative to dairy proteins by vegans as well as by those with dairy-based allergies. It is also being consumed as a quality meat-substitute, which is also cost-efficient.

The multiple health benefits of soy protein are driving the industry as consumers are becoming more health conscious. Its increasing application in the sports nutrition sector is also aiding the industry growth. Soy proteins are being preferred as a source of protein that is low in fat and calories and is cholesterol-free. They are also finding increasing use in soy-based infant formulas. Animal feed is another application sector that has been witnessing a growth and is aiding the soy protein industry.  With companies undertaking multiple R&D undertakings, the industry is being further propelled forward. The rising innovation taking place in the industry is also providing an impetus for its growth. The rapid urbanisations and increase in disposable incomes, globally, is also aiding the industry growth as they define and change the consumption patterns. The diversification of products comprised of plant-based proteins like soy proteins is expected to drive the global soy protein market in the coming years.

The report gives a detailed analysis of the following key players in the global soy protein market, covering their competitive landscape, capacity, and latest developments like mergers, acquisitions, and investments, expansions of capacity, and plant turnarounds:

The comprehensive report by EMR gives an in-depth insight into the manufacturing process and the cost involved. It also analyses the price trends across the globe. The report also assesses the market based on a SWOT analysis and an analysis of the Porter’s Five Forces model. A value chain and trade analysis have been provided, as well.

What was the global soy protein market size in 2020?

In 2020, the global soy protein market attained a value of nearly USD 8.91 billion.

What is the growth rate of the soy protein market?

The major drivers of the market include the growing population, rising food industry and the rising demand for plant proteins.

What are the key industry trends of the global soy protein market?

The soy protein market is being aided by growing trend of health and wellness diets, which require high-protein intake.

What are the major regional markets of soy protein, according to the EMR report?

What are the leading types of soy protein in the industry?

Isolate, concentrate and soy protein flour among others are the leading components in the industry.

What are the leading applications of soy protein in the industry?

Bakery and confectionery functional foods pharmaceuticals meat additives feed are the leading applications in the industry.

The major players in the industry are Archer Daniels Midland Company, Ingredion, Dupont, Cargill Incorporated, Wilmar International Limited, and CHS Inc., among others.

The global soy protein market attained a value of USD 8.91 billion in 2020, driven by the increasing focus of the organisations on optimising customer experience and operational efficiencies. The market is expected to witness further growth in the forecast period of 2022-2027, growing at a CAGR of 7.2%. The market is projected to reach USD 13.53 billion by 2026.

EMR’s meticulous research methodology delves deep into the market, covering the macro and micro aspects of the industry. Based on its types, the soy protein industry can be segmented into isolate, concentrate, and soy protein flour, among others. On the basis of applications, the market is divided into bakery and confectionery, functional foods, pharmaceuticals, meat additives, feed, among others. The major regional markets for soy protein are North America, Europe, the Asia Pacific, Latin America, and the Middle East and Africa. The key players in the above market include Archer Daniels Midland Company, Ingredion, Dupont, Cargill Incorporated, Wilmar International Limited, and CHS Inc., among others.

The global EPA and DHA market is driven by the benefits of EPA and DHA on cardiovascular health. Aided by the rising use of DHA in infant food, the market is expected to grow at a CAGR of 8% in the fo...
Read More

The India plant based protein market attained a volumeof 11,250 tons in 2020,driven by the changing dietary preferences among consumers. Aided by the growing protein-rich diet awareness and increasing...
Read More

The global eggshell membrane market attained a value of about USD 107.5 million in 2020. The market is further expected to grow in the forecast period of 2022-2027 at a CAGR of 9.6% to reach approxima...
Read More